A staple of MMO blogging is going on about the good old days, and no days were gooder and older at the same time than classic EverQuest.

I will stop for a second and define “classic” EverQuest as a time somewhere between late beta and the final days of the Planes of Power expansion.  Legacy of Ykesha changed the world too much in my opinion.  But if you’re down with Frogloks, the era was certainly dead with Lost Dungeons of Norrath, which made instanced dungeons a thing.

And in that time frame, the classic era, EverQuest was at its most popular, as millions of players passed through the game and as many as 550,000 were subscribed at once.  Most popular has to mean best product, right?  That number is how we know that we aren’t just suffering from selective memory that is editing out the bad bits.

So there have been calls to return to or recreate that era… probably since that era… to bring back all sorts of things like the harsh death penalty, simple classes, spells every five levels, mandatory grouping, open world dungeons, steep level curves, travel time, contested raiding, mobs that chase you right to the zone line, and probably dozens more that I cannot think of at the moment.

And yet, despite that, SOE quite deliberately moved away from that list.  It was as though some old school fans made a list of things that made the game great… that list I just started on myself… and the company said, “You like that?  Well, it has to go then!”  So we got instancing, easier levels, solo quests, a light death penalty, mercenaries, the Plane of Knowledge, player vendors, and some of the most awkward looking mounts ever to grace a video game.

The time seemed ripe for a successor, somebody to get back the essential hardships that molded a generation of MMO gamers.  But who would take on this task?

Mark Jacobs had EverQuest in mind when he said he wanted to take the “suck” out of MMOs.  But his game, Dark Age of Camelot, was really about realm vs. realm combat and not the Diku raiding and level grind on which EverQuest was built.  So I don’t think we can count that.

SOE themselves offered up EverQuest II, dreaming of it being the successor.  But EQII was build on a base of ideas that seemed to largely revolve reducing customer calls and quieting a few persistent complainers on the forums.  Having played EQ and EQII at launch, I gave my impression of what SOE’s “lessons learned” must have included.  EQII was many things, but it was not a successor to EQ.

Blizzard, of course, brought out World of Warcraft shortly after EQII, and it has dominated ever since.  Openly based on EQ, it sought to make a kinder, gentler, and more colorful version of the game.  It embraced a solo, no-fail, low penalty path through the game, the sort of attributes we now derisively ascribe to millennials.  That couldn’t have possibly been the real successor, and even if it was, they have screwed it all up since then.

Then there was Vanguard: Saga of Heroes, the Brad McQuaid attempt to get back to all that was good and right about MMOs, the REAL sequel to EverQuest.  While people blame poor execution on its failure to stick with anything beyond a tiny audience… and, at the time, making MMOs was hard and you had to do all the grunt work yourself… but I still feel he strayed from the true path.  I mean, how many of the fans of the game would go on about how “pretty” the game was to look at?  When was “pretty” ever an aspect of EverQuest, unless the word was paired up with things like, “ugly,” “awkward,” “dated,” or “strange?”

And he couldn’t leave well enough alone when it came to the 1999 formula and had to add new things like diplomacy.  So, in the end, not really a successor, as it never attracted enough of those it was alleged to be for.

Meanwhile, in 2006 SOE itself decided to try to farm this obsession for classic servers and rolled up what they called a “progression” server.  It was popular, so popular that the had to roll up a second one.  The two servers, The Combine and The Sleeper launched in June of 2006 and opened up later expansions as the raid bosses for the current expansion were defeated.  A flawed interpretation of 1999, and driven at the pace of raiders who would defeat bosses in short order, it became a staple of the game after free to play, when a subscription was required to wallow in the nostalgia provided.  To this day the servers remain popular, with the latest one, Phinigel, showing high loads on the server status page at even odd hours of the day. 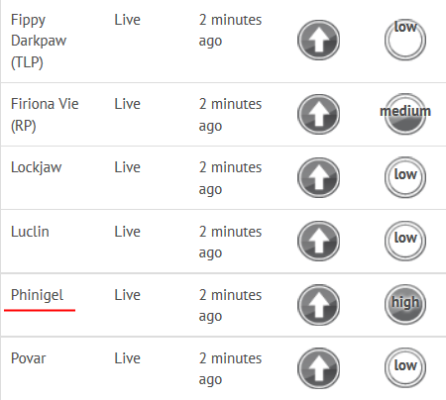 Who is playing at 5am PST?

While Daybreak has finally realized the potential of such servers… the first couple of attempts were launched with fanfare and then largely ignored by the community team… and while they do hint at an untapped desire for such an old school experience… they are not really successors in any sense of the word.  Also, the experience they offer is tainted by things that did not exists back in 1999, like crude maps and a quest log.

But for a long time… over a decade really… that was pretty much the only option available for somebody seeking the old school experience.  By 2006 WoW had fully dominated the market, and who wanted to knock-off an MMO that peaked at 550K subs when there was one driving to 10 million subscribers world wide they could blatantly copy.

It took the death of the big budget MMO (Star Wars: The Old Republic implosion), the death of the subscription-only MMO (The Elder Scrolls Online or WildStar, take your pick), and the cancellation of any future plans for Norrath (EverQuest Next gets cancelled) to really get to a point where the industry could even consider not copying WoW and reflect on the origins of the genre and where it first really succeeded.  Even Blizzard is having to acknowledge that their “good old days” are not today, but at some point in the past with the whole Nostalrius thing.

So we have entered the era of the niche revival MMO.  We have Camelot Unchained seeking to relive Dark Age of Camelot in some way, Shroud of the Avatar as some sort of 3D vision of the Ultima series, Crowfall… um… doing whatever it is doing, and Project: Gorgon just getting weird, because why not!

And in this time, it seems like somebody could go back and copy the 1996 Sojourn MUD/TorilMUD flavor of the classic DikuMUD mechanics and make another grouping and level focused MMO in Unity pretty easily.

Yes, I know we already have Project 1999, but having to be able to find a copy of EverQuest Titanium seems like a pretty high bar for entry in 2017.  And then there is Pantheon: Rise of the Fallen, Brad McQuaid’s next run at an EverQuest successor.  But I fear that he will be tempted to stray off the true path yet again.

Isn’t there somebody else out there that could rebuild a vision 1999 for us?

I mean, unless this whole nostalgia thing is just bullshit and the last 18 years of the MMO market has actually reflected what most players really want.  In which case, never mind.

16 thoughts on “Where the Hell is that EverQuest Successor Already?”