I think people are mostly in agreement that Minecraft Dungeons isn’t a very deep game.  The question, for me, is more whether it was worth the price.  If it had been a full price, $60 game, the answer would have be a clear negative.  But for just $20, is it worth getting mad about?

It is Minecraft and Dungeons

I’ll give that a firm “maybe.”

The game itself is light and easy.  Despite the hurdles of purchase, it runs smoothly and well with only the rare rough edge. (The delay between closing the in-game map and having the game respond to inputs is just long enough to be annoying.)  There is little to object to when it comes to how the game plays.

The game is short.  The thin story… defeat the Arch Illager… took me a little more than six hours to work through, and I spent some time experimenting with gear and enchantments (and setting up screen shots) along the way.  By the time I got to the final boss I was level 23.

The last fight in the story

I am pretty sure a more focused run could knock it out in much less time than that.

Who are those people in the end cinematic?

Once I’m done with the story in most games I am generally done with the game.  While finishing the story unlocked a new difficulty level, that seems a bit less than compelling. 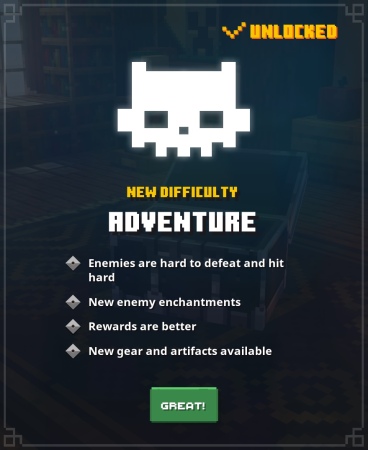 After the story, do it again

Going back to replay levels isn’t bad.  As noted, the mechanics of playing are light and easy and fun in a simple sort of way, and I found on my first run that notching up the difficulty in order to get better drops did open up some more side-dungeons in the various areas.  But you don’t get anything new, just the same ten areas you just finished.

I had to crop and merge to make this one map

There is a marker there for “Island Realms,” but that is some DLC that has yet to be released.  We will have to see how soon “soon” really is. 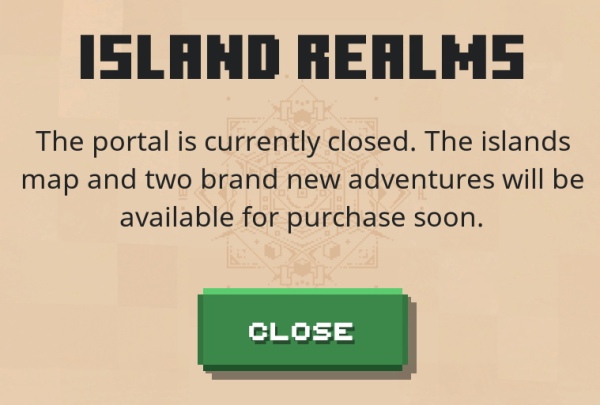 No islands for you yet

Replayability is also hindered by the fact that there are no classes, just the default Minecraft adventurer.

There is a hint of classes in the gear.  The armor you choose to wear corresponds to class roles that you see in MMORPGs.  It would be interested for a group who plays together to focus on specific roles via the armor they choose.  But for a solo player there isn’t a lot of point.

So it might be worth $20 to the right person, but as I noted in my first post, it seems a bit thin for the price otherwise.  Not that it isn’t fun, but if you had $20 to spend on an ARPG, there are other options.

For just $10 you can get a copy of the original Diablo over at GoG.com.  It feels a bit raw these days, but it has atmosphere, story, and three classes.

For the same $20 you can get the remastered Titan Quest Anniversary Edition on Steam.  It sprawls well beyond Minecraft Dungeons in content, and has expansions if you want more.

And for just five dollars more, you can get the Grim Dawn base game over at Steam, which has a lot more depth and content than Mincraft Dungeons will likely ever have and is more recent than the first two suggested alternatives.

Then there is Diablo III and Torchlight II and Path of Exile, the latter of which is free to play, if you want more ARPG options.

But, if you’re like me and have played all of the above and want something in that vein that is light and easy and fun, Minecraft Dungeons isn’t bad.  (And if you have the Xbox Game Pass for PC it is free.)  Just know that there isn’t a lot of “there” there when it comes to the game… though being able to have a pet llama that attacks your foes by spitting on them is not nothing. 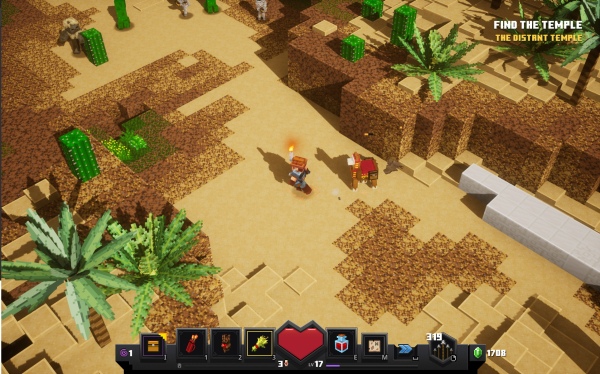 Me, my llama, and my bat

As for the coming DLC… I feel like I might skip that unless they really step up their game.  We shall see.