I mentioned before that one of the things about World of Tanks that keeps me going is the wide variety of tanks available to drive.  In fact, I have to remind myself to stay focused, lest I run off and train up to tier IV on yet another branch of yet another national tree.

I have been pretty dedicated to the German tank destroyer line.  My goal initially was to drive a Hetzer, having faced them so often.  That was easy enough and I pushed on to the StuG III, which is where I capped out.  I did actually train into the JgPz IV, making the StuG III an “elite” tank, but I never got around to buying the JgPz IV.  I saved up, but then spent it all on upgrades for my lesser tank destroyers.  Camo covers, the better to hide in ambush, and binocular periscopes and coated optics, the better to see you… and shoot you… before you can see me.  Not being seen and all that.

So I have been staying pretty faithful to that line, with occasional jaunts in other vehicles.  But as my desire to drive a Hetzer was stoked by getting shot by them so often, now being in the tank destroyer a new foe began to emerge.

I bounced enough shots off of heavy tank armor to start to wonder what it might be like to be on the other side of that equation.  So I started looking at what the shortest route would be to get into a heavy tank.

The KV-1 seemed to be the heavy closest to my grasp.  I had already gotten to the first rung on the ladder via going elite with the MS-1.  There was a pool of experience sitting there that helped me bypass the T-26.  Then I converted a bit of experience from other elite tanks (which costs gold, the RMT currency), which let me jump over the T-46.

But it wasn’t enough to get me all the way to the KV-1.  Only one step stood in my way, but it was a big one. I would need to earn the 13,500 experience to train that by driving the KV-1’s predecessor on the Soviet heavy tree, the T-28.

I love the T-28… when I am driving my Hetzer or my StuG III.

The T-28 is as big as a barn and about as well armored.  It might as well wander the battlefield with a “free kill” sign hung over the gun.  I practically salivate when I see T-28s on the other side in a match.  It was a design from the early 30s when they still thought maybe tanks would be like land battleships.

Now, however, it was going to be me at the helm with a “shoot me” sign hung over the gun.  But I wanted to get to a KV-1, so I gritted my teeth, invested as little as I could in the beast, and headed out to battle.  How bad could it be, right?  After all, for all its size and thin armor, it does at least have a pretty big gun for a tier IV tank.  A nice 76mm piece.

That was before I tried to shoot something with the 76mm gun.

In the game, part of the sighting system is a reticule that shows the potential area where your shot will go.  You get a nice little marker to put where you want it to hit, but the accuracy of the gun itself and the motion of your vehicle impact the potential cone of fire.  And, of course, the further away your target, the bigger the effective cone is by the time the shell reaches it.

When you stop though, and aim the gun and sit still for a little bit, that cone of fire contracts, the reticule draws in nice and tight around your aim point, and you are good to go with a high probability of a hit.

Unless, of course, you are driving the T-28 with that big gun.  I would stop, draw a bead, and wait for the reticule to close up… and wait… and it would move in a little bit… and I would wait… and it would stubbornly remain big enough to take in a large barn… or a T-28… and I would curse and finally shoot and watch the shell explode nowhere close to where I aimed.

Large is a relative term of course, and I have been spoiled by the very accurate guns on the German tank destroyers, where the reticule closes in nice and tight and you can snipe at long range with a reasonable expectation of a hit.  Add in the fact that I did not opt for a 100% trained crew (the T-28 has 7 crew members, and you pay in gold per person) and it was pretty clear that to hit anything with that gun with any regularity, I was going to have to get up close and personal.

One thing I will give the T-28, it moves well for a big fellow.  It is as fast as most of the light tanks it faces, except for that one goddam French taxi cab, the ELC AMX, that races all over the place with seeming impunity.  Of course, the T-28 is fast because it is armored like a light tank, while the big-as-a-barn aspect of the thing makes it considerably easier to hit.

If I could close with an enemy and hit them with the big gun, I could do some serious damage.  However, I am not alone in loving to see a big fat T-28 in my sights.  The thing is a shot magnet as people see the “easy kill” sign. 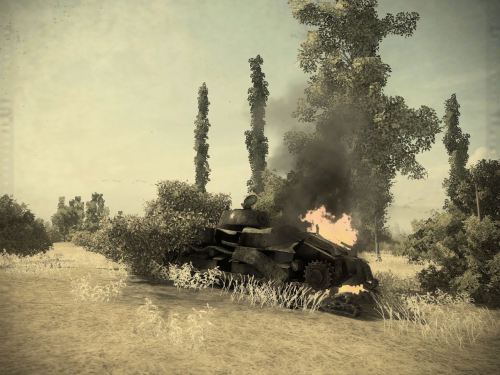 The natural state of the T-28

I died early and often.

This was not helped by the fact that the matching system seemed to be biased against giving the T-28 any possible advantage.

Finally, I decided to forgo some of my experience headway, largely provided by matches where my side went on to win after my early and entirely expected destruction, and trained for the 57mm ZiS-4 gun.  While it doesn’t do the damage or have the penetration of the 76mm gun, it is far more accurate.  This allowed me to actually provide a net benefit to my side in matches.

57mm… not compensating at all

I slogged on with the monster, actually doing okay with it once I fully resigned myself to its considerable limitations.  The 57mm gun let me hang back and shoot past the heavies in the vanguard… which was where I was aiming to be eventually… and actually survive for a while.

After an evening, a morning, and an afternoon of matches… with some time out now and again for the StuG III and some other tanks… I finally hit the mark and was able to train up to drive the KV-1.

I spent the experience, then bought a KV-1, opting to shell out the gold for a 100% trained crew this time.  You can spend a long time at tier V… or what seems like a long time to me… so I felt it was a worthwhile investment. I did not have enough experience to invest in any upgrades, so I took my showroom stock KV-1 out on its first engagement.

And, of course, got the crap shot out of me.

Being in a heavy does not make you invincible.

And the KV-1 is slow… slow to the point that you can move forward, or you can turn, but you really cannot do both at once.  But it can take a punch and even the default gun is good and more accurate than the one on the T-28.  Soon I was doing better in the KV-1. 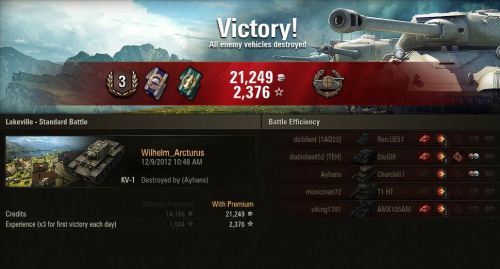 Having made it to my goal, I decided not to waste a garage slot on a tank I could not see myself ever using on purpose again.  I right clicked and select the “sell” option.  Bye-bye T-28.

And then I looked again and saw it still sitting there.  Somehow I managed to miss-click.  I sold the KV-1.

At least I sent the crew to the barracks, so I did not have to purchase another gold crew.  But that mistake would eat up all my remaining cash.  I wouldn’t be buying any upgrades for the KV-1 for a while.

The final revenge of the T-28.

I sold the T-28 before buying the new KV-1, just to avoid a repeat performance.