There is not much to recommend this app.  You need only look at its rating in the App Store to get a sense that it has… issues.

And certainly, if you have downloaded and attempted to use it, you might begin to wonder exactly what Evil Laugh Games finds so amusing.

Are you laughing with me… or at me?

If you can get the app to run… which the reviews indicate is a serious challenge for some… it doesn’t exactly behave well.  It comes up fine on my 16GB iPad 2.  But it crashes regularly.  It locks up.  It is slow.  The interface can be unresponsive and is often… sub optimal.

And it seems to have been designed deliberately to drain the battery of your iOS device.  I can see the battery indicator drop by at least a percent with almost each major action I perform.

And then there is what happens in the app when it actually does run.  You can quite easily come to the conclusion that the whole thing is a group effort to try and create new euphemisms for sex, sexual organs, and various sexual acts by using otherwise innocent words in suggestive ways.  You would be shocked, for example, at the way “jamtart” ends up getting used in sentences.  Reviews that aren’t complaining about the app itself often complain about the blue nature of the user content. (Somebody is searching for the app now, based just on that I bet!)

And if people aren’t turning to sex, then they seem to be succumbing to a disease that makes them add just one more adverb to an already over-burdened phrase.

So what is this Prose with Bros app, with so much going against it?

It is essentially a competitive version of magnetic refrigerator poetry, something that was very popular like… a decade back?  They still sell such kits, but they aren’t such a big thing any more.

You challenge somebody… either taking a random match or picking out an individual you know or just want to match wits against… at which point you are both presented with the same set of words.  You then try to construct the best… sentence, phrase, paragraph, whatever… that you can create from your limited vocabulary options. 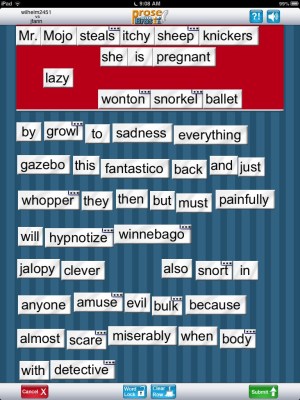 Prose with Bros play in action

As you arrange words in the four lines you are allowed, you can supply punctuation, and some words have different forms; nouns can be made plural, verbs can change forms.  If you can get the UI to cooperate.  Tap and hold… damn, it moved.   Moved again.  And again.  Dammit, just let me tap and hold you stupid app!

Once you have completed your masterpiece, you then submit it for the approval of the mob.  The entries from you and the person you are playing against are put up for a vote.  Other users who log in will be able to pick which of the two of you created the best/most amusing/most sexually oriented entry.

And believe me, sex gets votes.

Sometimes your grand entry is recognized as superior. 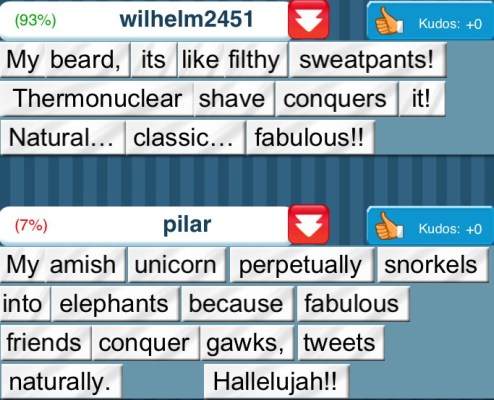 And sometime you are clearly getting robbed.

Losing… to that? Really?

And, once in a while, there is a tie. 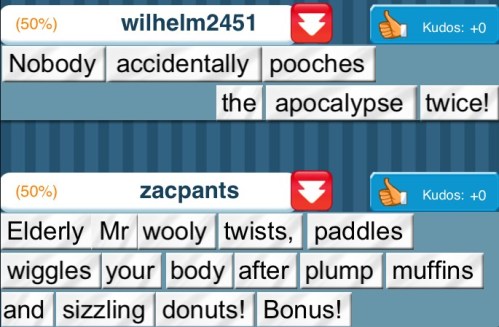 Brevity didn’t quite carry me this time…

I think my best entry of late was:

Mrs. Narnia was the mo-ped queen!
She packed a slamming machine!

I won with that one.  I would have taken a screen shot of it and the entry I defeated, except that among the many flaws of the app, the ability to find old entries is pretty bad.  Unless you specifically “save” an entry, you end up with a list, sorted oldest at the top, that contains many duplicates and has a habit of crashing if you scroll down too fast… or too far…  or if it is feeling cranky… or if it is a Tuesday… or for no reason at all.

Still, this is my favorite app at the moment.  And I have to admit, it is trying to do a lot, so many of its flaws seem explicable, if still annoying.

If you are interested in playing… and you can get the app to install and run correctly… you can challenge me.  You can see my handle in the screen shots.

Tips for winning, based on my observations:

So who wants to play?