So far I would say that I like the WoW Legion expansion.  The whole thing feels, in many ways, like a reaction to the Warlords of Draenor expansion.

For example, there are still missions and followers, but there only a few of each, and they are much more focused on helping you, as opposed to the way things were in Draenor, where garrison missions were a self-perpetuating system.  There you ran missions to gain resources to run more missions, you gathered more followers in order to run more missions so you could gather more followers.  You geared yourself up and fattened your wallet, all while never leaving your garrison.  In WoW Legion you have to actually keep playing in the world to earn resources to have your followers do anything.

Likewise, crafting professions, which were made completely trivial in Draenor are now… well… I am not sure how to characterize them now.  I think, as an engineer, I have made one item so far as part of the quest line for the professions.  I’ve completed a number of mining related upgrade quests.  And I finally got the sixth cooking recipe that finished up the initial quest there.

Maybe that is the theme of WoW Legion; Quest all the Things!  Though I may not be far enough in to make that determination yet, the trend seems to be holding.  And questing works for me.

I have been… slow… in getting into the Broken Isles.  After mucking about a bit, trying to decide which character to get into the expansion first, I settled on my Paladin and started working through the zones in a clockwise fashion. 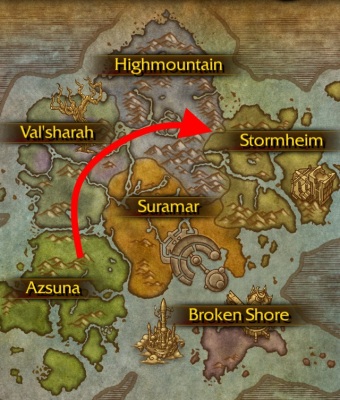 Starting at 7 and working my way around the clock

Almost a month into the expansion, that isn’t very far… though by going more slowly I may have arrived at level 100 at about the same time I might have had I been playing more diligently thanks to always having blue bar exp as I went.   That was how that was supposed to work right, back in the day?  A way to keep slackers like me from falling too far behind or some such.

Anyway, yesterday I finally made it to level 110 with Vikund, my first character at the new level cap. 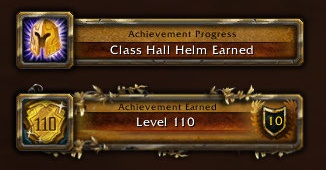 I still have all of Stormheim ahead with him, and then Suramar and Broken Shore and world quests and the artifact weapon to manage and all of that.  Lots to do.  I can see why people are saying that this is, perhaps, not an alt-happy expansion so far.  Of course, wait until flying gets unlocked and all your follow-on characters can just zip through the air.  That tune might change then.

Of course, this being Blizzard, there have been the usual staples of every expansion.  I have slaughter the local fauna with the Nesingwary.  I have helped out D.E.T.H.A. yet again. 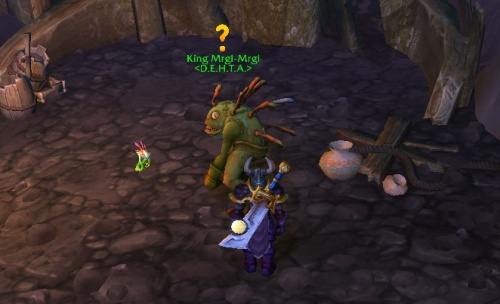 The artifact weapon thing has been fine so far.  At least that is one equipment slot I don’t have to worry about updating, even if every ret pally in the order hall has an Ashbringer of one color or another.  I was a little crestfallen when the experience required to upgrade it went from a steadily increasing tempo… 750, 800, 1000… to a 6.8x jump.

That pretty much killed off any forward progress there.  It takes a lot of ~150 upgrade hits… never mind the low impact of all those 10-25 boosts you find in the field… to get anywhere.  I am hoping that I am just lagging behind somewhere and that better bumps will be available at some point.

But overall I am happy enough, if not overly enthusiastic.  Lots left to do, and with the usual two year expansion cycle unlikely to change, it is probably good to be a month in and still have a lot of content ahead.

Of course, I could probably do with a bit less of being pestered by Khadgar.  If his servant or his upgraded servant chasing me all over wasn’t enough, Now I have his disembodied head following me around trying to get me to take a quest when I am just back in town to clear out bags and take care of a few things.

Not creepy at all

Yeah, I know, take the damn quest and he’ll go away… only then I’ll forget about it in my quest log.  I’ve been trained by various games to take quests only when I am ready to do them, lest I kick off some event for which I do not have time.

At least I am not poor.  The plan to replace the garrison mission income in Draenor seems to be to make gray trash loot worth a lot more.  My auto-sell addon rings up hundreds of gold every time I stop at a vendor after question for a while.

So that is where I stand in the Broken Isles so far.  No exactly unbridled enthusiasm, but happy enough with things overall.