The Arms Race expansion is upon us today and Alpha clones have been unleashed… sort of.

Bigger ships in your future Alphas

As I covered in a previous blog post, Alpha clones will now be able to access up to 20.5 million skill points, the expanded skill range including all empires, Tech II weapons up through cruisers, battlecruisers, and battleships with Tech I gear. 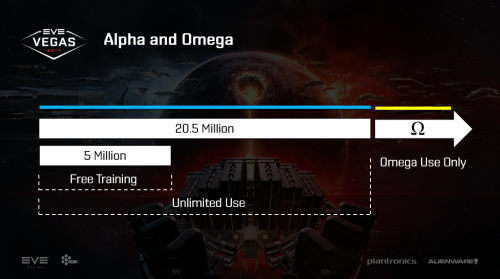 The sticking point, for me, is how an Alpha clone acquires those extra 15 million skill points.  If you’re a veteran Omega and you drop down to Alpha, those are now yours to play with.  If you’re just an Alpha though, CCP has a magic potion for you, a Daily Alpha Injector. 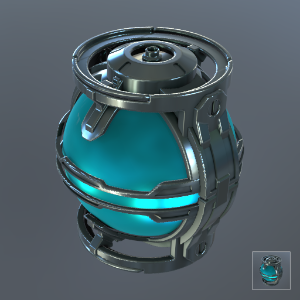 That is either buying Omega training speed one day at a time or selling skill points for cash, depending on how you look at it.  My discomfort aside, which probably applies to free to play monetization in general because I am an old school purist in that regard, I will be interested to see how this plays out.

While that is no doubt the biggest item coming with today’s expansion, there is more to be seen.

Siting a desire to increase “friction” when hauling or deploying capital ships, CCP has made changes to fuel size (reducing the size of isotopes yet again), consumption, and associated jump fatigue.

So hot dropping and jump drive movement will cost more.  Expect the prices at your favorite null sec shipping services to go up a bit.  But you will be able to carry even more fuel to offset that, so you’ll be less likely to run out of gas even if you’re using much more.

And then there is the reduction in the jump fatigue cap.  Back with the Phoebe update you could wreck a character for weeks by jumping too much.  Eventually a cap of five days of jump fatigue was put in place, so you could go jump happy one weekend and then be good again a week later. 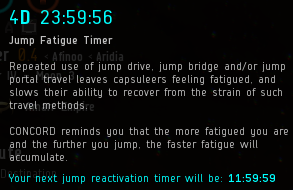 I have achieved maximum jump fatigue

A 20% reduction makes it four days.  I guess that is good, I just wonder how many people that will affect.  My limited experience with capital ship ops has shown me a group that is very, very conservative about accumulating any fatigue.  They’ll wait 45 mins or take many gates to keep people under an hour because having a cap fleet with jump fatigue hinders tactical flexibility.  I am sure somebody out there is happy they’ll only hit four days now, and it will help when and if the day comes that we need to burn out the drives to get to the next big fight, but I don’t see this changing much in a world where having admitting you have a day of fatigue marks you as an weirdo.

Likewise changes have been made to fuel block production and T2 materials, though that is an area well outside the realm of my knowledge in New Eden, so I don’t understand what these changes will mean, save that I imagine something will be more expensive.

There is a new event kicking off called Arms Race which will start tomorrow and run through the 12th.

Given the logo I expect it will be typical of events we have seen via The Agency this year.  After that wraps up the annual Yoiul Festival will commence on the 19th.

The expansion also includes some graphical updates as a number of in-game objects being re-rendered.  Warp disruption bubbles are also getting a graphical update to improve their render performance and to make them less likely to white out space when we deploy them by the dozens in null sec fleet fights. 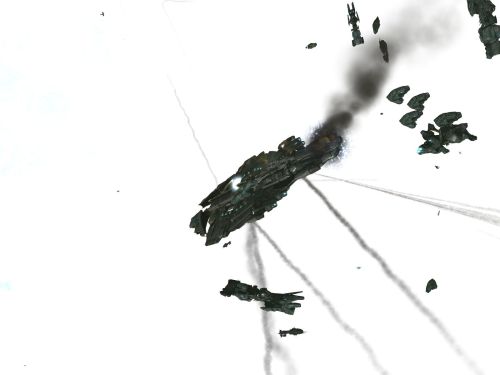 An example of the “white out” that comes from over-bubbling

We are also getting a new in-game asset in the form of a monument to celebrate Project Discovery. 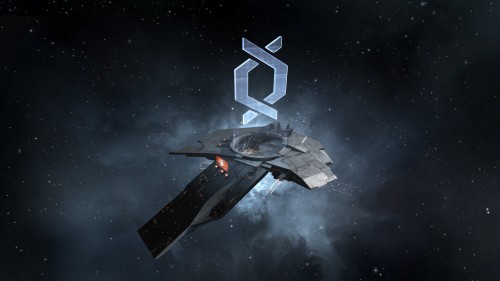 According to INN the monument will be located at planet III, moon 2 in the Lanngisi system in Metropolis.  I expect this will spur Mark726 back into action and yield a new update over at EVE Travel.

Otherwise the update brings the usual series of fixes.  Resource Wars is getting some tuning along with a plethora of UI an text changes and corrections.  Hopefully the promised fixes for the launcher and login server… getting online has been problematic at times and the launcher has had a habit of forgetting your login information regularly… will be good.

The Arms Race expansion has been successfully deployed.  For a full accounting of the changes… or as full of an accounting as we every get… there are the Patch Notes and the Updates page for the expansion.

Others with notes about the Arms Race expansion: