The fourth week of our Spring Fantasy Movie League has now come and gone.

This week saw the long awaited downfall of Black Panther from the number one spot in the box office as well as another shake up in the overall Meta League standings.  The options for the week were:

Way back at the start of last week, when the 5pm unlock happened on Monday, my opening gut pick was two screens of the upcoming Pacific Rim Uprising, five screens of Game Night, and one screen of Red Sparrow.  And had I fallen into a coma until 9:01am on Friday morning I would have been in very good shape… so far as Fantasy Movie League went at least… because that turned out to be the perfect pick for the week.  I had it in one. 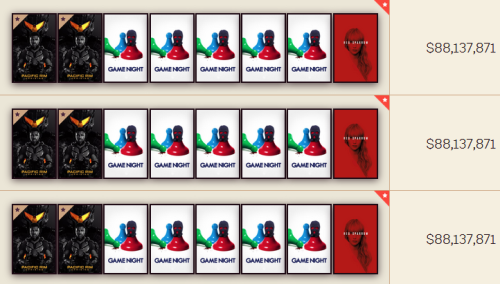 Instead I had to watch the forecasts and predictions and weekday numbers and ponder what might come to pass.  I keep my own box office estimates in a spreadsheet and, looking at last week’s spreadsheet, I was pretty much spot on for most of the titles.  That is all very nice, but if you’re off by a fair margin on just a couple of key titles it can offset being right on all the rest.

On one end, the forecasts for Pacific Rim seemed to keep going down and down over the course of the week.  On Monday night $28 million seemed like a pretty reasonable estimate, but by Thursday there was so much hedging that $22 million seemed to be about what people would commit to.  At that price it wasn’t worth the screen space.  There were better options, including Black Panther.

Meanwhile, at the other end of the spectrum, I wouldn’t have given Sherlock Gnomes a second glance on Monday.  But for reasons still unexplained forecasts for it kept getting more and more rosy.  There was a nut case outlier calling for $18 million for it, but that only made the $16.5 million estimate seem that much more reasonable.  At that level, in a world where Pacific Rim might only make $22 million, four screens of it seemed like a sane choice.

And, I will admit, there was a bit of contrariness that made it attractive as well.  I spend most of the week looking for the non-obvious pick and, more often than not, outsmart myself.  And so it was that I went with 4x Sherlock Gnomes, 3x Deathwish, 1x Red Sparrow. 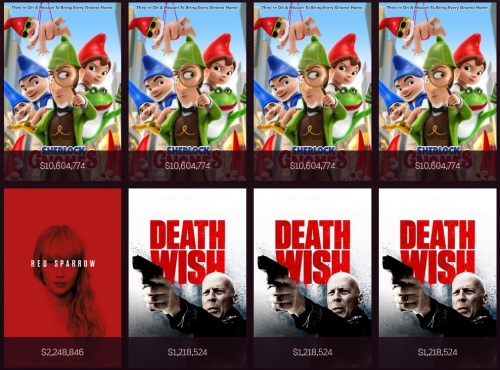 And I certainly outsmarted myself this week.  When the first estimates came in on Saturday I knew I was sunk as they were calling Sherlock Gnomes at $10 million.  That sank to $9 million on Sunday, but rose back up to just past $10 million in the final count.

That was just enough for me to finish last among those who remember to pick for week four.  The final scores were:

Somehow the Gnome madness spread and there were three of us who bet it all on Gnomes, and together we sit at the bottom of the stack for week four.  Technically, of those three, I am the only one that qualifies as both “old” and “male” but this week’s title was the best I could come up with.  I wasn’t going to waste it just because it didn’t match the facts.

Meanwhile, the top end of the range is led by those who went with two screens of Pacific Rim, with Kraut Screens winning the week overall.

That led to some changes at the top of the season rankings for the Meta League.

Po remained on top overall, but Corr and I fell back in the pack chasing him.  Meanwhile Liore, who went from 21st place to 10th place last week, continued her climb by hitting 5th position this week.  You troll her at your peril.  Fortunately for us gnome fanciers, overall it wasn’t a huge box office weekend.  There have been weeks in the past where a pick like that might have ended up with us being $140 million behind the perfect pick rather than just $40 million.

That brings us to week five, where the options look like:

Deathwish, The Strangers, Red Sparrow, and Peter Rabbit all dropped off the list, the latter seemingly bad timing due to it being Easter this coming Sunday.

Showing up this week are Ready Player One, Tyler Perry’s Acrimony, God’s Not Dead, and the latest from Wes Anderson, Isle of Dogs. (If you aren’t sure about Wes Anderson, try this Honest Trailers video.)

Ready Player One is clearly expected to take the week.  Hell, it was directed by Steven Spielberg which guarantees it some box office exposure on that alone.  So my Monday evening 5pm pick was 1x Ready Player One, 2x Pacific Rim, and 5x Midnight Sun.

Then again, it is something of nerd culture thing, there seems to be something of a backlash about it in the very core of the audience one would expect to be embracing it, and Spielberg hasn’t exactly been delivering what his reputation might lead you to expect in the 21st century.  I mean, Indiana Jones and the Kingdom of the Crystal Skulls made a bunch of money, but I didn’t feel the need to buy a copy or even see it a second time.

Anyway, we’ll see if I stick with that pick or change up based on the misguided whims of various prognosticators again this week.