EverQuest II has a system in place to help you along in leveling alts.  When you get a character to the level cap all of your other characters get a 20% bonus boost towards their adventure or trade skill experience, depending on which cap you hit.  You can tell if it is active because the words “Veteran Bonus” are highlighted in color, as opposed to being grayed out.

Mousing over the words “Veteran Bonus” in the character select screen will bring up a tool tip that will tell you your bonus status.

What you see with one char at adventure level cap

It is a handy little thing if you like to collect alts and get them moving along after you finish leveling up your main.

Why do I bring this up today?  Well…

Yes, by Thursday evening, the third evening of the Blood of Luclin expansion, I had made it to the level cap for the expansion with my first character.

I can seriously prove, thanks to ManicTime tracking, that I spent more time getting through the access quest to get to Luclin (yes, I did it the hard way, but the easy way hadn’t been posted yet) than I spent getting to the level cap.

I had hit level 119 before I even wandered out of The Blinding, the zone where you first show up in the expansion.  I hit level 113 for just showing up and was gaining a level with about every other quest after that.  At 119 I had a quest that sent me off to Sanctus Seru, a city zone, where I ran down two quests and hit level 120.

I barely have any screen shots of the new expansion yet.  Though I do have almost exactly the same one of riding the flying bug transport service across The Blinding that Bhagpuss posted.  Fortunately, I have another one that shows the flight destination coming up, so I won’t have to post an almost exact dupe. 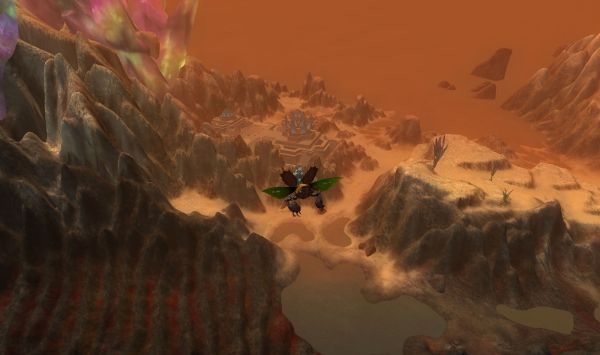 Bug flight coming in to land

I am not sure how I feel about this.

On the one hand, I do appreciate a a quick and spirited leveling experience.  And it is likely that I will be working on some alts, so it is nice to have that bonus and all.

On the other hand… and this is going to be the hand that is dropping things because it is trying to carry too much… what the literal hell is going on here?  What is the plan?  Who decided that level cap in a day was a universal right to be extended to all players on arriving at their second zone?

I won’t stop playing due to not having hit the level cap, but I must admit that the drive to level cap is often a key motivating factor to me.  I do tend to be something of an advancement junkie and can get discouraged when moving forward is grindingly slow.  But going this fast is kind of crazy.  I am pretty much still wearing most of the hand out gear that I got for showing up.

I even went into the Alternate Advancement window to knock that slider over a bit, but realized then that we didn’t get any more AA levels this time around.  I am at the AA level cap of 350, and have been there since I wrapped up the signature quest in the Plane of Magic a few weeks back.

As for the expansion itself… well, I’ve barely been there, haven’t I?  And I don’t have the nostalgia factor that Bhagpuss has going into this as I was don’t with any serious play time when Luclin became a thing back in EverQuest.

The quests seem decent.  I probably need to read a bit more closely to follow the story.  Daybreak likes to have the story come directly from the mouths of the quest giver NPCs and I will admit I do occasionally with for a “can we just get on with the task?” response to hurry them up though the dozen or so “how did that happen?” and “is that the case?” and “tell me more” responses you’re prompted to click on.

I am also a bit surprised that flying isn’t a thing on Luclin.  Real world physics would indicate that flying would be easier on a moon where gravity is lower.  And of the few things I recall about Luclin from EverQuest, it was that the gravity was indeed lower.  Wasn’t that the lore reason for being able to walk about with a million platinum coins on your person in the Bazaar?  I do recall that time I forgot to bank my coins before leaving and ended up on the Plane of Knowledge severely over burdened and walking at a snail’s pace to get back to that sweet low gravity.

Do we unlock flying at some point, or has Daybreak gone where Blizzard only fears to tread and put out a no fly expansion?  I guess flying might be available in other zones, but I wouldn’t know yet, would I?

I am also a bit concerned about game performance with the expansion.  At prime time US there is a lot of server lag.  I have spent time waiting for the game to respond to my inputs, I get moments where I appear to be standing next to a mob but cannot hit it because the server thinks it is somewhere else, and my mercenary and pets have a hard time keeping up with me.  I see them lagging way behind as I move, and I see the followers of other players I pass wandering about, trying to find their way to their boss.  Maybe making us all keep a mecenary, a pet, and a familiar out at all times for the stat bonuses wasn’t such a good idea.  (Also, my merc seems to work for free on Luclin.  The pay time comes up and he gets zero.  Is that a bug or a feature?)

And then Skyfire server fell over for a while yesterday.  Naturally that is the server I play on and it was a bit disturbing to log in and simply not have any of my current characters listed on the character select page.

Some of this is new expansion jitters.  Daybreak has had extended maintenance downtimes for the last couple of days, no doubt to try and address some of the problems.  But still, there do seem to be some shaky aspects here.

As for my plan, I do want to see more of the expansion.  But hitting level cap also puts me in a mind for alts.  This could be a good expansion for getting some alts up to the level cap, though the hard part is going to be getting them to level 110 so they can join in.  I have a few at level 100 and the Plane of Magic path to 110 takes considerably longer than the Blood of Luclin path to 120.

And then there is the tradeskill path.  I have a few characters at or about level 100 for tradeskills, including Sigwerd.  I may have to look into how to get into Blood of Luclin crafting, though that too means going back to past expansions for a while.

2 thoughts on “My Veteran Bonus Restored in Norrath”