We ended up with a late in the cycle monthly economic report for February last week.  Some times they pop up in the first week and some times in the last week.

While I have quit posting about the MER every month, in at least a general news sort of way, this was an MER I was waiting for as February saw the introduction of the plan to reshape the mining landscape of New Eden, kicking off with a radical nerf to asteroids.

The net result was fewer asteroids to mine in belts and anomalies, and the yield from the remaining asteroids was set to be much lower.  So I figured we might see some impact on the MER for February.

To assess impact however, you have to have context.  If I just tell you there was 28.6 trillion ISK worth of ore mined in February, that number has no anchor, no way in which to tell if that is big or small, up or down, or what might have had an impact.  So I grabbed the data from three MERs to see if we could see a trend.

For December the mining total was 30.2 trillion ISK, with the top ten regions being:

The top four are null sec regions and are the locus of activity for four big groups, Imperium, TEST, Fraternity, and PanFam.  After that we get two high sec regions, Domain and The Forge, which also happen to host the top two trade hubs in the game, Amarr and Jita.  Then there are two subsidiary null sec regions for PanFam and Imperium, then a remote corner of null sec, then finally another trade hub region.

We’ll call that the new  normal for now.  During the Chaos Era the high sec regions around trade hubs rose on the lists, but have settled back down some.

In January there was a total of 34.5 trillion ISK in mineral value mined, with the top ten regions being:

Mostly the same cast of characters.  Outer Passage dropped out and Fountain, another Imperium subsidiary region.  There was also a war going in the north centered on Venal which may have drawn off some PanFam and Fraternity players.

And finally we get to February, the month of the change, when mining value totaled 28.6 trillion ISK in value and the top regions were:

The top ten regions generally look to be down when compared to previous months, though the null sec regions listed all host organizations that went more fully to war around Venal in February.  That was when the Imperium deployed the new Goon Expeditionary Force there.

Meanwhile, the mining total for New Eden, while down some, doesn’t look to be down as far as one might expect given the radical nature of the nerf.  Why is that?

I think there are three things that play into that.

First, the change went in mid-month, so we do not have a full month of a starvation economy to look at yet.  If that is correct, the March total number should dip even further.

Second relates to how those numbers are calculated.  As I have oft repeated, minerals and ore are not ISK faucets.  They have no value in and of themselves.  There is no “minerals” line on the sinks and faucets graph.  You cannot vendor them for ISK.  So their value can only be measured by the market price.

How CCP comes up with that number is still opaque to me.  Their data shows it is based on two baskets of prices, one for high-en minerals and one for low-end.  But the specifics I do not know.  But I do know that if the price of minerals goes up then if people mine the same amount of minerals, then the value of the total amount mined will still go up.

So what has happened to the price of minerals? 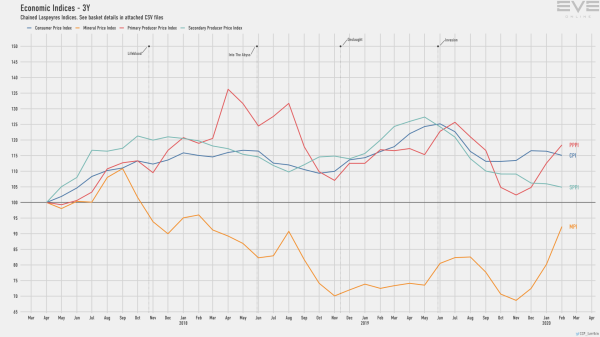 Mineral prices, that yellow line at the bottom, appears to be ramping right up from its nadir in November 2019.  Mineral prices are way up, as is the primary producer price index (PPPI) which is a measure of the cost to produce items and which tends to follow the price of minerals in its ups and downs.

That rise in mineral prices has likely softened the drop of the overall mined total as, even if there were fewer asteroids to grab, and they yielded less when processed, the market value of the end result was higher.  Tritanium, the most common mineral, was floating around 6.25 ISK per unit just before the change, while it was running over 7.60 ISK per unit at the end of the month.  That doesn’t seem like a radical change, but it had been down around 5 ISK in November and you need a lot of trit if you’re building things.

So, I suppose for this, we will have to see how things follow on with the March MER to get a good idea as to how hard this hit.  Or maybe April.

I said there were three things that might play into this, and that was only two.  During February and March moon mining has remained a source of basic minerals.  That is changing.  CCP has announced that after all current moon chunk cycles are complete, basic ore and minerals will be largely removed from moon mining operations, the only exception being R4 moons, which are currently not worthwhile for much beside basic ore and minerals.  Those are getting nerfed too, but they get to keep a little of the basic stuff.

And you only have to fly through Delve with mining platforms visible on your overview to get a sense of how much moon mining might be adding to the basic mineral flow.  So while the March MER will be interesting, it seems like April will show an even greater change.