After some time away from the game and then some mucking around in old Azeroth in search of a guild tabard and some epic mounts, we finally had to get back to the business waiting for us in Outland.  It was time to go back and finish Hellfire Ramparts.

I wasn’t sure faster mounts were really going to help us, but we did get a level each in our wanderings since the last attempt on the instance.  A couple in some cases.  Our group for the venture was:

And even after our warm ups in various Azeroth dungeons, getting back into Ramparts was going to be a bit of a chore for us.  If nothing else we were going to have to get used to having a somewhat larger aggro radius.  So we got ourselves to Honor Hold and rode on out to the instance. 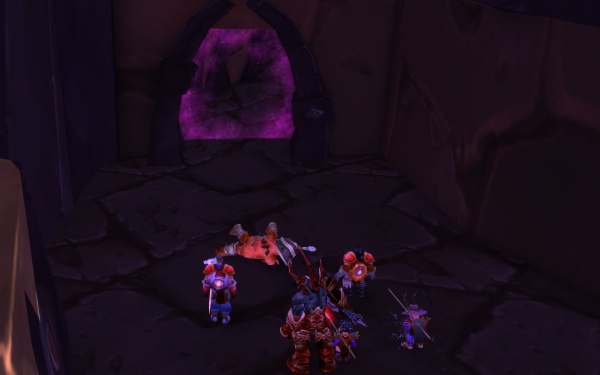 Our fate lay beyond the instance swirl

Once in and buffed up we were able to take out the first few groups without too much problem.  Another residual issue from doing Azeroth instances was the amount of sloppiness we could endure.  Pull a few extra mobs?  No problem!  Here, the aggro radius and the mobs more geared to our level meant when we managed to aggro not one but two additional groups, it was a race to the zone line when the tank went down.

Beanpole almost made it. Warlocks don’t have blink

The comedy of errors continued as we towards the first boss, Watchkeeper Gargolmar.

Even there, a boss we had brought down twice before without incident, we ran afoul of aggro radius, taking him on before clearing all the way around, and thus managing to bring two groups of guests to the fight. 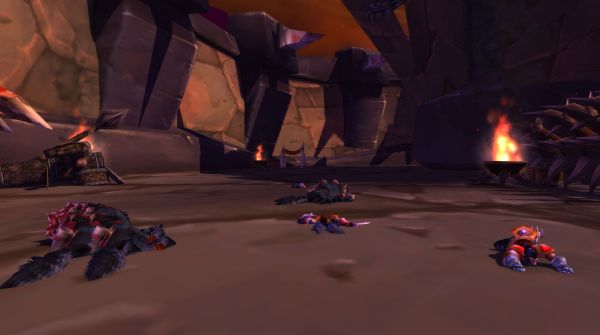 I think Ula made it out of the instance, or got close at least.  But the rest of us had to get a ress.  Fortunately we had the soul stone handy.

After that we decided to be a bit more thorough.  We pulled everything around the boss, so when we got him the next time it was just him and his two minions.  The minions went down quick, so when he called for healing there was none coming.

Watchkeeper Gargolmar getting his now

After that we started doing better.  The high point after that was the group of five at the top of the ramp which we have managed to wipe on every time.  As we got ready for that fight, I looked at my exp bar and realized I would level after we killed two or three of the group, so when we pulled them around the corner I did not hold back on mana.  I kept consecrate going and anything else I could throw at them.

Just as the third one was about to die I announced that I was out of mana… then he died, I leveled up, and was suddenly full again.  We had not problem that time around.

Win at the top of the ramp

We then managed to clear the mobs ahead of us until we had a choice.  We could go do Omor the Unscarred, who is generally the second boss, or we could just go straight for the final bosses, the duo we had yet to defeat, Nazan and Vazruden.

We went for the big boss pair. 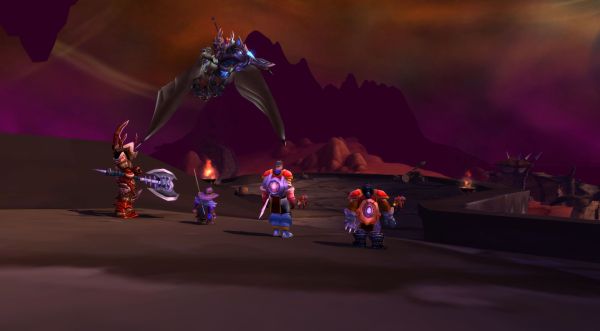 And we came close on the first fight.  A slip up on my part… late on a health stone… and I was dead, leading to a wipe.

The soul stone got us back in action again and we went right at them once more… and wiped again.  This was not going to plan.

We took a break to refresh drinks and feed cats, during which time we read up on the fight.  We were getting close, but we had been close before.  I was staying under Nazan’s snout to avoid as much of his fire breath as I could and we were burning down Vazruden pretty easily before turning on Nazan.  And then it came out of the guide.  Vazruden wasn’t really a threat.  We needed to focus all fire on Nazan as early as possible.  Ranged attacks and DOTs on him while he was still in flight, then all in when he landed.

With that bit of info we changed up our tactics and… won the fight at last.

After looting the chest and posing for a screen shot, we ran around the corner and gave Omor the Unscarred a shot.  He went down very easy when compared to previous fights.  A couple levels and some gear upgrades will do that.

And the run helped us with a few more gear upgrades.  There was something for everybody along the way, and even more with the quest turn ins back at Honor Hold.

One instance down, many still to go.  We’ll see how far we get as a group of four.

The next target is the Blood Furnace.

2 thoughts on “Return to Hellfire Ramparts”