Saturday night was on us again. While we logged off after the Mana Tombs without any real plan, I assumed we might give the Auchenai Crypts a try, so headed back out to the Auchindoun and the meeting stone that serves the instances there abouts. Being there and offering up such a modest proposal got us headed in that direction.

Due to a late bath time for Bung, Jr. (or so I heard), Bung was running a bit late, so we amused ourselves around the meeting stone by dueling. It basically went:

Ula beat Skronk
Skronk beat Earl
Earl beat Ula
Vikund beat his sword into a plowshare, for all the good it did

The longest battle was between Skronk and Vikund. After several minutes of rude gestures and vague threats we actually tried to hit each other a bit in what Skronk described later as a “short bus slap fight.”

The proposition put forth previously that perhaps we ought to respec gained a little credence when Skronk finally did Vikund in with his best DOT spell, which hits for 17 points of damage every time you reach the half-life of radioactive fel iron. We were both low on mana and hit points by that time.

Bung showed up after a bit and we all pretended we weren’t dueling, lest we all have to get burned to cinders by the warlock.

The group changed a bit, at least in levels, from the previous week, as a couple of us took advantage of the level cap amnesty we instituted last week, freeing any of us to go off an get to level 70 in our free time if we so desired. Ula was very close to 67 last week, while I got on early and made it to 67 just before we started. Earl went above and beyond and went from 66 to 68 since last week. So our line up was:

We moved to the instance, which is on the west side of the circle that contains the instances in Auchindoun. (Mana Tombs is on the north side.) We checked on the quests we needed and found that we were a few steps short of being able to pick up the big quest for the instance, Everything Will Be Alright.

Not only could we not get the quest, I wasn’t sure I believed the sentiment behind the name.

Faced with running down the quest chain until we could grab the quest or just going in to the instance as a trial run, we chose the instance. We might get slaughtered in the first room and then we could go do quests if we wanted.

So in we went.

We got off to a difficult start right away. Every mob in the first section summons a non-elite mob to help it when engaged, and even a non-elite that is level 65 or so can be a serious pain.

And then there are the mobs that mind control party members. Our little duels outside the instance turned out to be foreshadowing of some of the issues we would face. Again, Vikund did not kill any of the team, but others did.

With all that, we were soon dead. 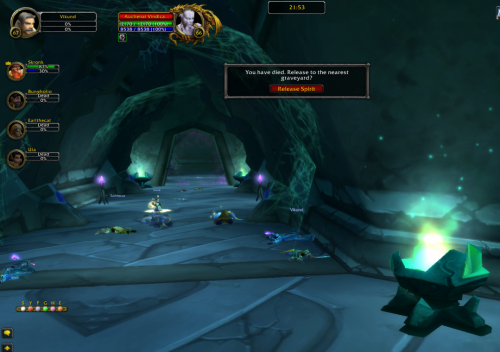 We persisted though. We were having just enough success to move forward and, once learning which mobs were immune to crowd control measures (the monks) we were able to plan accordingly and make it through that first major stretch of the instance. I was a bit worried as the instance turns back on itself twice, so there were three sections of this length through which we would have to fight. It was beginning to look like a long evening.

And then we made it around the bend into the next stretch and found the first boss, Shirrak the Dead Watcher.

On the plus side, his stretch of the instance did not have much in the way of mobs in the way.

On the down side, he is a pretty tough. He got to watch most of us dead twice.

He has all sorts of badness, including an aura that slows down spell casting and a mean look like no other. You don’t want to see your name display thus:

Especially if you are a caster and both plate wearing guys are dead.

The first fight with him ended in a wipe.

The second fight was a victory, but a close one. By the end of the fight, only Ula was left standing while Shirrak had only a tiny amount of hit points left. But Shirrak ended up dead, killed in the end by a damage over time spell from Bung. Once revived, we stood in victory.

Seven-eyed Shirrak nicely dropped the Collar of Command, which went to Skronk.

That was about the end of stretch two. A pair of monks and then we turned the corner to find skeletons.

While pairs of the Dranei in the instance were tough for us, we were pulling groups of five elite skeletons and chopping them up. And then we made it to the last stretch, the room of Exarch Maladaar.

He has masses of skeletons, non-elite this time, with the occasional elite Dranei to watch over them. We scythed through that lot like a very sharp scythe going through some grass that was just the right texture for scything. Soon the way was clear for the last battle.

And one of our toughest so far.

Maladaar’s trick is that, every so often, he summons a shade of one of the party members to join him in fighting your group. If you are not careful, you can end up with a few of these dark versions of yourselves beating on yourselves. Here are a couple of shades beating on Earl.

We were not ready for this and wiped.

By this point, we had been through enough deaths to need the repair bot. Some equipment had gone red for people. 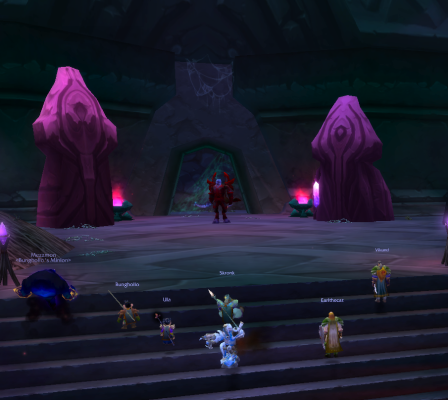 A second run at him ended up in a wipe as well, as our plan for dealing with the shades was not quite ripe. In the end, we all tried to stand together, save Earl who was off tanking Maladaar. Since a shade of a given person forms next to that person, having us all together let Vikund consecrate to grab aggro and then take out the shade.

This mostly worked, except for the fact that, near the end of the fight, Maladaar summons a shade of himself. We managed to slay Maladaar on this attempt, but then the shade of him finished us off.

Technically, with the boss down, we won the fight, with the shade remaining as an exercise for the student. Or some such.

We revived, ran back to the instance, being fresh out of soul stones, and defeated the shade of Maladaar, finishing off the instance.

Call it three and a half attempts to finish the last boss.

And that was our run. Our first run. We still have to run down that quest line, some experience to gain, and perhaps some more nice drops to get. And spirit shards. The alliance has had control of Terokkar when we have been doing our instance runs, so we have managed to harvest some spirit shards during these runs. We might be able to turn those in for some of those “welfare epics” that have been much discussed elsewhere.

Next week might be an off week though. Earl may finally be moving from his tiny apartment in Hell’s Kitchen to a house out in the suburbs. No longer will we get a live feed of how noisy it is in Manhattan at 3am through his mic.