I patched Station Launcher, then it patched EverQuest II, and this is what I ended up with last night: 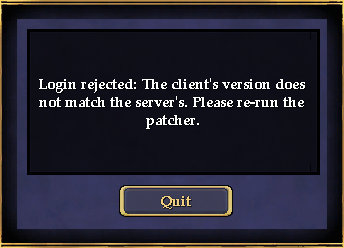 I don’t think patching and login problems are the sort of “Living Legacy” that SOE wants: Invite people back, then don’t let them in.  At least I am not alone.

On the other hand, EverQuest patched and fired up on the first go.

As I mentioned before, I am trying out both the Raven and the Rokh as possible battleships for running level 4 missions in EVE Online.

Being somewhat missile oriented, coming off of flying a Drake, the Raven seems like the right fit. However, the shields on the Rokh are a bit more impressive and, frankly, the Rokh itself just looks much more menacing. Not that looks alone would seal the deal, but the Diesel Locomotive meets Desert Eagle .44 look of the Rokh does bring out more emotion than the Raven, which looks more like a NASA project where some of the engineers used metric measures, while other used English measures.

And I have some investment in gunnery skills that would pay off if I went with the Rokh. But with either ship I am aiming for the tech II weapon systems.

Which is where the Rokh falls down for me… a bit at least.

There is something of an imbalance in the tech tree between missiles and guns. To be able to mount tech II guns on the Rokh, I have to fill in the missing skills below: 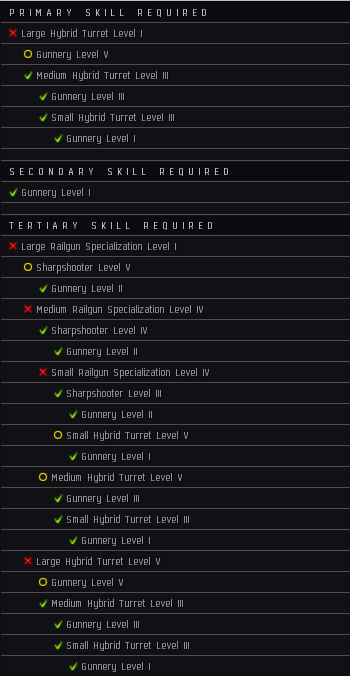 That, but the way, is a good 66 days of training time, spread over six different skills (I finished up Gunnery V since I took the screen shot) to get the all the prerequisites lined up for Large Railgun Specialization, the skill needed for tech II.

Cruise Missile Specialization, which is required for the tech II launcher, has a much lower barrier to entry: 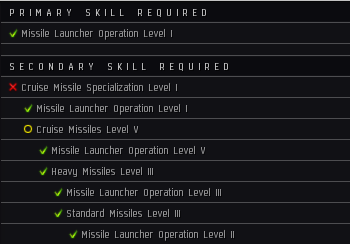 Basically, I need to get my cruise missile skill to V and I am set. That will be a little more than 25 days, so not a gimme, but still a lot less steep than getting the railgun equivalent.

Not that I need to have tech II launchers or railguns to fly the ships, but I was interested to see how many more prerequisites railguns had, and I was surprised to see what a difference there is between the training requirements.