Hulkageddon V is now over.  The last API verified kill has been counted.  The event, having run from April 29th through May 29th, is now over.

(That is EVE Online game time, which runs on UTC.)

It was both the longest and most destructive iteration of the event, running for a full month and leaving almost 7,600 wrecked mining vessels in its wake worth a (low) estimated 1.47 trillion ISK.  That is the API verified number from the leaderboard. 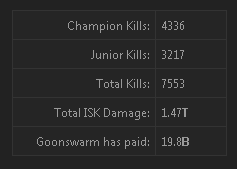 Champion kills are exhumers and Orcas, while Junior kills are tier 1 mining barges.

But that includes manually entered kills, and with Goonswarm offering a bounty of 100 million ISK for every 10 exhumer kills, you have to figure some of that is bogus.  Who could resist trying to scam the Goons after all.

I will stick with the lower number for the purpose of comparing past events.

And here is the comparison.  This is how past events have totaled up.

So Hulkageddon V lead to the destruction of more mining ships than all past iterations of the even combined.  Of course, it also ran more than three times as long as past events; more days means more kills.  So when averaged out, Hulkageddon V appears to be shy of the rate of kills set by Hulkageddon III, with a rate of about 244 kills per day. (Or 278 kills per day if you take the eve-kill.net number for true.)

I suspect that the rate of kills per day would have been higher had the event been shorter.  Things got off to a very fast start and was close to the 4,000 kill mark only 11 days into the event.  If it had kept up that pace we would be talking bigger numbers.

Of course, even after the event is over, the anger from some rages on. (hat tip to Jester on that one)

And, to a certain extent, the event itself continues to rage on with an announcement from The Mittani that Goonswarm payouts for exhumer kills will continue until further notice.  This announcement even has its own official thread in the EVE forums now.

Another fine OTEC moment.  Every Hulk destroyed is more technetium sold for its replacement.  We shall see if this keeps high sec mining suppressed.

4 thoughts on “Hulkageddon V – Destruction Comes to an End… Mostly…”