Normally I note when MMOs that are popular in our little corner of the web go live, if for no other reason than to track dates and such.  Somehow I missed my cue when ArcheAge went live… um… the other day?  Last week?  There was some sort of head start and such.  I sort of lost track.  But anyway, it went live and people went crazy.

Certainly, lots of people in the neighborhood seem to be playing it.  You can find all sorts of posts about it at:

As far as I can tell, Trion launched the game at exactly the right moment, in the lull where WildStar has begun to fade… erm… set out to create MegaServers(tm)… whatever… but Warlords of Draenor is still a couple months out.  And so ArcheAge became the oasis to which everybody flocked.

All servers queued, some with restrictions

Being too successful is the best problem to have, but it is still a problem.  I even downloaded it over the weekend to take a peek.

I finally bit the bullet and let Trion install their Glyph gaming sales portal so I could log into Rift, and once I was there it was just a couple more clicks to have it install ArcheAge as well.

I was a little annoyed that they installed HackShield, an anti-hacking root toolkit, without bothering to warn me in large, flashing red letters, as I would have stopped the install right then and there.  I understand the need for such things, but I will avoid them if I can based on past experience with things like PunkBuster and such.  Basically, to play the game there is now another company in the mix, AhnLab, Inc., that can cause problems.  And there will be problems.  Some portion of legit users are always hit by these measures, so they basically send the message that it is okay to screw over a few of the innocent so long as we catch more hackers.  And then there is always the possibility of it being used as an attack vector.  Bleh.

And I wasn’t even going to have the potential to hack.  Being non-Patron scum, I was only able to check out the queues to get onto a server.  There was some variance, with the older servers being queued up past the 3K mark, and even had restrictions on what characters you could create.

More than an hour indeed…

More than an hour was a pretty light touch compared to reality.  While I am sure that patrons were being shown to the front of the queue that held me back, I let the whole thing sit there for a couple hours and it seemed that the queue moved me up about 700 places an hour.  The newer servers were at about half total queue it seemed.

The calculation eventually resolved to tell me my wait time would be about 20 minutes.  That was clearly optimistic in the extreme for prime time on Saturday afternoon.  Not that it mattered all that much to me.  I was just there to kick the tires.

But for others it has be a problem, and the whole queue situation has plenty of people talking about what ought to be done.  Hardcore Casual, Blessing of Kings, and Keen & Graev have all piped up on that front.

All of that has masked, to a certain extent, worries about the land rush in ArcheAge.  With housing being in the actual world rather than in some form of instance, the supply would seem to fall far short of the potential demand.  That has people worried and a whole side topic about illegal farms, which aren’t actually illegal has popped up.  However, stealing from them is illegal.  Go figure.

Anyway, it has all been an interesting read from the sidelines so far.  Trion is promising compensation for patrons over the whole queue thing and has worked to get more servers online.  But will this all end with them announcing the formation of MegaServers a few months down the line?  I suppose we shall see.

A little over two years back the team at Hidden Path Entertainment, the creators of Defense Grid: The Awakening, ran a Kickstarter campaign with a slate of goals.

The baseline goal was to raid $250K to create a new set of levels for Defense Grid: The Awakening.  Being one of my favorites in the tower defense genre, I was in just to get a few more levels of the game.

But Hidden Path Entertainment had a grander vision.  They had their eyes on Defense Grid 2, a sequel they hoped to fund through the Kickstarter.  For everything they wanted to do… new engine, multiplayer, level creator/editor, support across multiple platforms… the target was one million dollars.

However, sometimes our reach exceeds our grasp.  In this case, 30 days of Kickstarting only came up with $271,727.  That was enough for the basic goal, more levels for Defense Grid: The Awakening, but nothing else on the list.  And they delivered on that… almost on time.  The promise was for December of 2012 and we got it in January of 2013.  Not much of a slip at all.

We’re working to cross the minimum and fund Defense Grid: Containment.  But please also understand that by joining the team as a backer, you’ll also get a copy of DG2 when we release it.  We’ll need to do extra work on our end to earn or raise the remaining funds in order to complete DG2, but when we do, you’ll still be a part of the team.  Crossing $250,000 gets you DG:Containment this December, and DG2 when it is complete.

They were going to have to go find another way to fund it, but it was still part of the plan.

Time went by.  I played through all of the levels in the new expansion multiple times.  Hidden Path kept us up to date on funding, which they managed to secure through a couple of sources.  Kickstarter backers were allowed into the beta on Steam earlier this year.  And, today, Defense Grid 2 becomes available on Steam.

At least the Windows version is available today.  Mac and SteamOS versions are slated for mid-October.

Those of us who supported the Kickstarter got our keys this past weekend, so I have already spent some time with the game, and it is good.

The single player game is an expansion on the original Defense Grid: The Awakening, with story missions that carry on from there and all the variations on how to play through a given level you have been lead to expect.  There is still multiplayer co-op and the whole DG Architect, which allows players to create their own levels and share them through the Steam Workshop, still to discover.

Here are a few screen shots I have taken of the game. 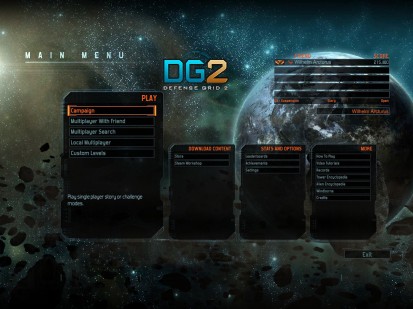 A level from beta 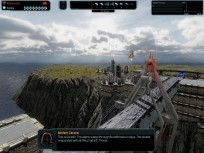 Dropping into a level

A level in progress 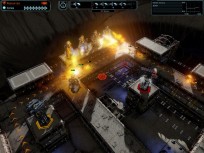 Hey, I won… on normal

The art style has changed, the turrets have all be redone, and the levels are part of a wider landscape now.  The aliens are a bit less interesting so far… though I haven’t made it that far into the game.  The turrets do seems to have more well defined roles now.  And, of course, there are a pile of achievements.  But for the most part it feels like a good, solid tower defense game.

As part of my Kickstarter pledge, I ended up with an extra key.  I am going to give it away to somebody who comments on this post.

All you have to do is leave a comment indicating that you would like the key and make sure that the email address you use when leaving the comment is valid (nobody by me can see it and that is where I am going to send it, so if it bounces you lose) within 24 hours of this post going live (by 15:00 UTC, 8am PDT, or 11am EDT September 24, 2014) and I will use some sort of random number generator to decide who gets it.

The winner will be notified by email and I will append the result to the post.

And if you don’t win, well, the game is only $25.  And if that is too steep, there is always the Steam Holiday Sale in December.

But so far I recommend the game if you liked the original or enjoy tower defense in general.

The roll was 13, which I guess means spoutbec wins the Steam key.  We’ll see if his email address is legit shortly.