Having built the automated sugarcane farm, which now produces more raw sugarcane than I can ever possible use, all while I mine away down below the earth, it became time to start doing something with the output.

My plan, based on my still tenuous knowledge of the game, was to take the sugarcane, turn it into paper, and trade the paper to the right villager in the village we ran across way back when, in order to accumulate the villager currency, emeralds, so I could buy other items from them.

I wasn’t sure how much paper I would need, how much I would get for it, what I would buy with the emeralds once I got them, or even where the village was.  So it was less of a plan and more of a venture based on pure optimism.

The first thing I had to do was find the village again.

I recalled it being vaguely to the southeast of our current home area.  I had actually run across it once since we first discovered it, but did not setup a marker or make note of its general location or coordinates.  I was on another mission at the time.  So, compass in hand I set out to find the village.

I went south first, then veered off toward the southeast to stay in the plains where we tamed the horses.  I found the horses again, and considered maybe riding a horse rather than walking, but I am not sure about horse dynamics at this point.  So I carried on.

I found a cobblestone column with some torches on it, a marker of some point I left.  Not sure why.  There wasn’t an overnight shelter or anything under it.  So I kept going.

Marker of no import

Eventually I spotted the roofs of the village a ways off and arrived there as dusk was falling.

I had heard from a few sources that villagers are not so bright when it comes to defending their town.  They do go inside at night, but I wasn’t quite prepared for the ferocity of the undead attack that would follow nightfall.  It was really a horror movie scene, with zombies and skeletons pounding on doors and running to and fro in the village.  I stepped out to kill a few, then fled back inside.  I was ignore long enough that I could use the bed I brought to fast forward to daybreak.

With the morning I decided to fortify the village.  I had read that you have two choices on keeping a village safe.  Either stay far enough away from it at night that the chunk it is in doesn’t spawn anything… the world really does revolve around you… of fence it off and light it up.

I had brought some supplies with me, so I made a crafting table an used some wood to build fencing.  However the wood quickly ran out before I had even gotten an eighth of the way around the perimeter.  So I went back and made a few shovels, dug up some surrounding hills, both to provide material and to give me flat terrain to work with, and then built a three high earthen berm around the place, with a few doors and plenty of torches.

I had it mostly done before the end of the first day there, but had to run for shelter as the sun set.  The monsters were not as plentiful due to the wall, but they were still out in force.  The bedtime fast forward worked again for me though, so I was able to resume my work again the next morning, though a pair of creepers hiding around the corner of the house I had claimed nearly got me.  They left quite a hole.

I dug up some more dirt, flattened more terrain, and finished off the berm.  I had to corral a couple of villagers who got up that morning and decided to see what was on the other side of the short earth wall.  But I got the place surrounded and laid out even more torches, so that when the sun went down once again, the forces of darkness were much reduced. 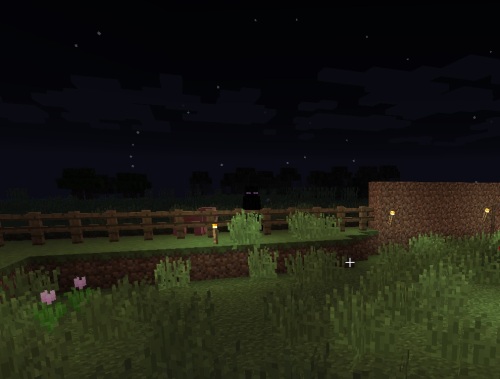 Just Enderman at the fence line staring in…

At that point, with the village semi-secure, I decided to head back to the castle to make some paper.  I went off with a pack full of exploring supplies only.  I left my bed and crafting table behind, built another lit pillar just outside of the village and, in a moment of obvious oxygen-rich blood flow to my brain, turned on the diagnostic overlay and wrote down the coordinates of the place so I could find it again.

Then it was back to the castle, which was a bit of a zig-zag path, though I did remember a couple of landmarks, and I had my compass, which would set me on approximately the right course.

But once back at the castle I decided to end my cross-country wandering by building a road.  I had plenty of cobblestone from mining and was no longer using them as building material for the castle itself.

And so I started on the long, L-shaped road to the village, straight as an arrow south from the castle, then a right turn east to the village.  And I decided I would run a mine cart track along it to make the trip that much quicker. 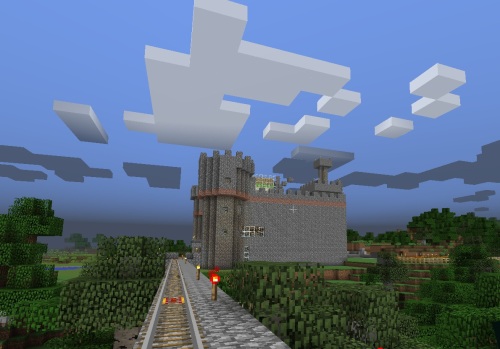 On the road facing the castle

The rails had a practical application during the building process as well.  It took several day/night cycles to get anywhere close to the village.  But with the mining cart and powered rails laid, I could just jump in the cart and be home and in bed in a flash.  No need to dig a series of shelters along the way.

The actual building wasn’t very dramatic.  I started the whole thing as a causeway over the plains, but at a change to a tiaga biome I hit a hill and had to make a cut through it, while clearing some trees, in order to keep the road straight and level.

And once I was done and had a terminus at the village, access was pretty quick.  The mine cart moves quickly.

Arriving at the village station

I was now able to haul my paper over to trade for emeralds.

It is a good thing that access is easy too, as the librarian will only take so much paper per day, so I have to go visit regularly to sell.

Of course, having accomplished this minor Minecraft engineering feat, I had to show my daughter.  I was at the village when I called her over to see my new quick route to the village.

I gave her a tour of my village fortifications, showed her which house I had holed up in, and the door in the wall I made to get to the track.

Then I ran over to the end of the rail line and… my mining cart was gone.

I had left it there at the end of the line, as I always do, so I could just jump in when it was time to go.  However, this time the cart appeared to have gone of its own accord.  And then, as we sat there, my daughter acting as though I had left the keys in the car causing it to be stolen, the sound of of the approaching mine cart was suddenly audible.  It was coming back.

And as we watched, the cart rolled up with a sheep in it. 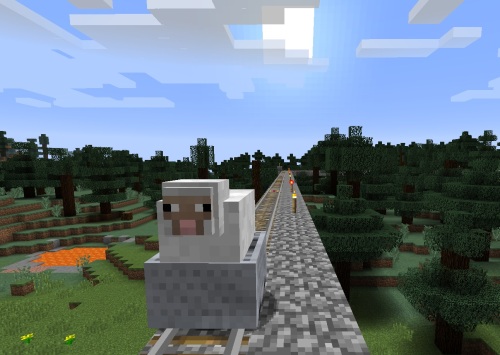 Ha ha! Mystery solved and mine cart returned.  And then the sheep hit the end of the line, reversed, and kept on rolling.  The cart, now getting away, I gave chase. 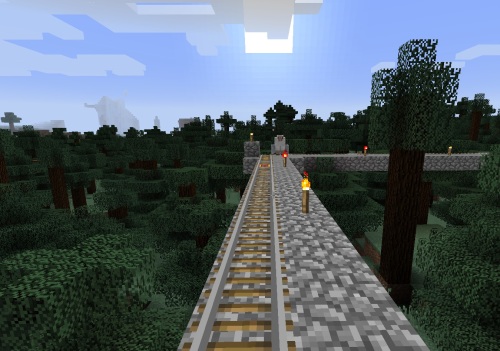 And the sheep keeps on rolling

Chasing was futile however, the cart moved too fast.  So I wandered up the rail line waiting for to catch the sheep on its return journey as my daughter laughed and explained how animals in Minecraft will do that sort of thing.

I caught the sheep, un-carted him, and slaughtered him for good measure.  More mutton for the auto-furnace that somebody suggested in the comments last week. 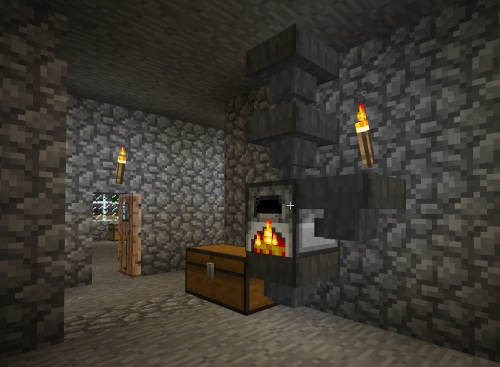 Mutton cooking! The input trunk is on the second floor.

So now I take my mine cart with me whenever I arrive at my destination.

Still, I am pretty happy with my little rail line. 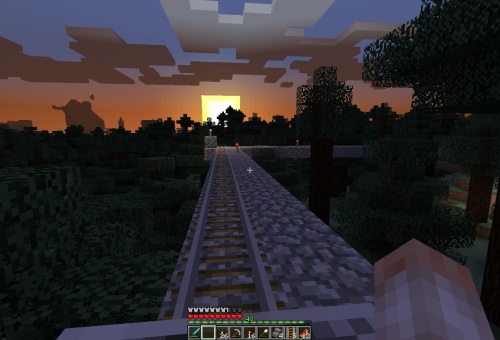 I will get home before the sun fully sets!