1,100 words because Asher said he wanted to see the blog post about this.

I was keen to get into a fleet yesterday.  I had been away last weekend then fairly busy over the week, so hadn’t done much more than log into EVE to update the client so far this month.  All I had been able to do is watch Jabber, which has been full of news about fights I missed.   So with my wife and daughter were out of the house, I had some time for a fleet op, and there was even one scheduled for 19:00.

I was logged in early and ready to go.  It was Yacht Fleet doctrine, so I decided to fly logi since I already had a Guardian in my hangar in Saranen.

As were sitting around in the station waiting for things to get setup, I noticed people in logi channel chatting about fits and making sure people had the right fits.  That got me to look at my own fit.  Sure enough, my Guardian, which I bought back when Beard Fleet was new, before we were flying Machariels ourselves… hell, my insurance on it had expired, so it had been a while… had an old fit.  All the modules in my high slots were wrong.

At this point things were starting to sound like we would be undocking shortly, so rather than trying to fiddle with my current ship, I just opened up the contracts window and found a fresh Guardian to purchase.

I did look at the contract… I looked at what was important to me at that moment, the high slots, which the contract had correct.  I did not check anything else.

In my experience, that has been a safe thing to do.  In sovereign null sec stations, only friends and allies can list contracts.  That doesn’t mean that they are always correct, but anybody trying to screw with people via doctrine contacts gets in trouble.

However, basing out of Saranen in low sec means that stations are NPC owned and anybody can dock up and put things on the market or list contracts.

Anyway, that will become important in a moment, but at the time I bought the new ship, we got the order to undock and align, and off we went to defend a LAWN tower down in the Vale of the Silent. 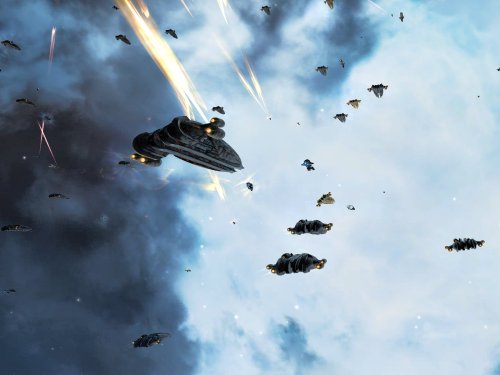 Yacht Fleet on the move in low sec

Then we hit a gate covered by drag bubbles.  We were all stopped well short of the gate and the order when out to burn for the gate with prop mods on.

Burning for the gate

However, I quickly noticed that everybody seemed to be moving much faster than I was, leaving me behind.  For some reason my ship was only moving at about 74 meters a second with the afterburner on.  I noted this in the logi channel, as I couldn’t tell what was up.

By that point people were mentioning me by name on coms as falling behind and telling me to turn on my prop mod.  I mentioned in fleet what I had said in the logi channel, that I seemed to be capped at 74 m/s.  Somebody asked me to link my fit, which I did, at which point I became “that guy” in fleet; the fool with the bad fit or who had done something wrong.

Not the first time I’ve been in this role.

Not only had I missed the fact that there was a bad prop mod in my fit, but one of the rigs was a Medium Higgs Anchor Rig I, which is not at all what you want on a combat ship.  I would totally link to some information about it, but EVElopedia is gone, the Brave Newbies Wiki doesn’t have an entry, and the EVE University Wiki only mentions it in passing.  Bleh.

The upshot of that description is that it reduces the maximum velocity by 75%.  It is useful for mining barges as it allows them to stay aligned and up to speed so they can warp off quickly if a hostile shows up without the barge constantly moving out of range of the asteroids being mined.

Well, we were far from home, close to a potential fight, and there wasn’t much I could really do.  The ship couldn’t keep up, could anchor up properly, even after I removed the offending rig, and couldn’t tank if I got targeted.  My ship was a liability to the fleet.  So I told the logi channel that I was leaving fleet and dropped out of the op.

Of course, now I was in the middle of the Vale of the Silent with a problematic fit and many jumps from base.  So I started looking at the market and found a station about five jumps off that had the replacement modules I needed.  I warped along, docked up, bought the modules, fitted the ship, and was set.

It went fast enough that I thought I might be able to rejoin the fleet.

So I joined the fleet and got back on coms, at which point somebody noted that “the Higgs Anchor guy was back”  Yeah, that was me.

While I was away the situation seemed to have changed.  No fight had materialized for the tower and the fleet had a destination back in the direction from which I had come.  Fortunately, the main fleet had enough slow battleships along that I was able to catch up and rejoin for our run back to the titan, which would bridge us past some of the gates.

Our titan, bridge up, off in a POS bubble

The ride home was even less eventful than the ride out, and I only had to listen to a couple dozen people remind me to check the fittings in contracts before I accept them.

Look for that module for sure!

On the bright side of things, I did end up back at our station in a correctly fit ship.  And the bogus contract had been cheap enough… so it would be at the top of the list… that I paid only a small premium over a correctly fit Guardian.  A correctly fit one was ~230 million when I checked on our return, I paid 200 million for the bad one and it cost me  just shy of 32 million to bring it up to scratch, mostly because of a tech II rig, so a 2 million ISK penalty for not paying attention.

At least I will be ready for the next fleet.