I have several minor things I keep wanting to write about when it comes to Pokemon Go, so here I am on a Friday lumping them all into one bullet points post.  At least this will all be about one topic.  For once I am being considerate of future me writing that month in review post I guess.

Pokemon Go launched three years ago this month, which seems strange.  It does not feel like the game has been around that long, yet here we are. 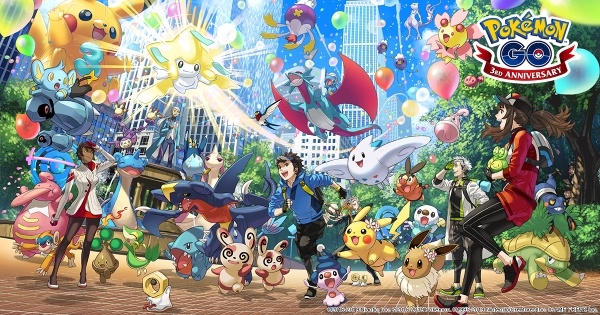 While there aren’t the crowds out playing the game the way there were in the summer of 2016, it still seems quite popular.  It is a fixture on the SuperData revenue chart and my wife and I run into people playing fairly regularly.  They are often people our age… you know, old people.  There is probably a message in that.

My own anniversary with the game is in August, as I started a month late.  I didn’t have a smart phone up until that point, Luddite that I can be.  Expect a post about that next month.

In order to celebrate the anniversary, Niantic has a series of events planned for the summer.

After months of hoping to be able to finish off the special research task I was finally able to catch an Aerodactyl, the last step I needed.  The Aerodactyl came up as a reward from a daily research task.  I never actually spotted one in the wild.  But that meant that I could collect the special Pokemon Meltan.

Of course, when one door closes another opens.  Now that I have Meltan I can work on evolving him into his final form.  However, that requires 400 Meltan candies and Meltan doesn’t spawn in the wild so the only way you can earn them is by walking with him as your buddy.  But, as a double bonus, you only earn a candy every 20km you walk with him.  That would be 8,000km for all 400 candies.  I like to walk, but not that much.  I’ll have to save up my rare candies for him.

Last month the Pokemon Go community day featured Slakoth, which was good for me because Slakoth almost never appears in our area.  My wife and I were out at the mall when the event hit and took full advantage, catching many a Slakoth, including a few shiny ones.

I caught enough to be able to finally evolve Slakoth through both of its variations into Slaking.  Not only was that another pair of Pokemon off the list, but the Slaking I got is now the highest CP Pokemon in my bag. 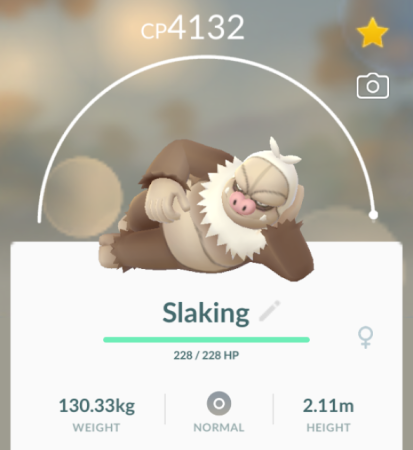 Slaking is not lacking

He isn’t as painful to fight as a Blissey would be at that CP, but he does make people work if you want to kick him out of a gym.

Niantic, in an attempt to slow people down as they worked to “collect them all” introduced the Sinnoh Stone as part of the fourth generation Pokemon in the game.  It applies to some, but not all, of the Pokemon of that generation.  You have a chance to get on when you finish seven daily research tasks.  However, in my estimation, that “chance” is no higher than 1 in 4.

So now I have a queue of Pokemon ready to evolve, lacking only the Sinnoh stone ingredient.  And every week, when I get to that seventh day research task, I swear when I don’t get one.  Oh well.  This week I got one, so Togetic got evolved at last.

Where I work I can walk a 500m path that takes me past 5 Pokestops and a gym.  This means that my bag is always full and that I am pretty good about earning coins regularly.  I end up buying bag space and gift boxes that have lots of incubators.  One of the things that you often get from gift boxes are premium raid passes.  I am sure these are important to people who raid often, but they don’t really come into play unless you do more than two raids a day regularly.  I don’t raid very often, so they tended to just collect in my bag since the game pretty much forces your daily raid pass allowance on you.

At one point I had about 35 of them in my bag and could do nothing about them because they were one of the items you could not delete.  So they just took up space… until a couple weeks back when Niantic finally got the word.

I noticed the little garbage can icon, which meant that I was finally able to delete the excess.  I keep 10 in my bag, just in case my wife and I go out and hit some raids over the weekend.  So now they are not taking up quite so much space.  But, if I want rare candies to evolve Meltan, maybe I need to raid more.