In my ideal world the CSM summit minutes would be skippable.  In this dream world CCP would communicate anything important via Dev blogs or news updates on the main web site or even via dev posts in the forums.  As much as I loathe companies hiding things in the forums, that would be something at least.

But, as these things go, CCP does no such thing.  If you want to stay informed you pretty much have to read through the CSM summit minutes or you might miss things that otherwise go unmentioned anywhere else.  I recall that the fansite program was declared dead in a past set of summit minutes, but we’ve yet to hear anything about that via any other official source.

So if you want to know what it up you had best dive into nearly 70 pages of minutes as you cannot even trust summaries, as much of what was said lacks some of the context in which it happened so interpretations are all over the map.  Of course, your own interpretations are suspect too, as are my own.  Welcome to the CSM minutes.

The focus of the team into winter is split into 80% early retention and 20% veteran stagnation.

That is the lens through which I believe we should be looking at CCP’s statements and actions.  They put that up front, the very first point, and I suspect most everything about their near future plans flow from that.

For example, it clarifies that list I quoted at the top of the post.  “Bleeding” could be a number of things, like the fall off in online players during the blackout.  But CCP is focused on new player retention, and the bleeding to be stopped is what happens with new players in the first week.

How many new players log back in as time passes

That chart was presented at EVE North in Toronto back in June and clearly remains the central issue to be solved by CCP.

It was suggested by a former member of the CSM that CCP should put “fix the stupid” ahead of “stop the bleeding” on their list, but after reading and reflection, my sense of the minutes is that “stop the bleeding” is a just a subset of fixing the stupid.  For example, looking at that chart, whatever is keeping half of newly registered users from logging into the game probably ranks very high on the stupid list.

And, rather bluntly, CCP says in the minutes that stupid is everywhere and in all aspects of the game, and they have to start somewhere.  No sense in trying to boil the whole ocean of stupid at once.

With that top priority in mind it isn’t hard to read reality into other things that came up during the summit.

For example, when the Alliance Tournament gets mentioned, CCP Falcon offers up a set of excuses as to why CCP hasn’t kept it going.  And they are probably valid excuses.  But he fails to mention the big one, which is that new player retention… stopping the bleeding… is the top priority and the Alliance Tournament doesn’t do anything to help that.  So suggesting, for example, that paying CCP in cash rather than PLEX would change anything seems to completely miss where CCP is focused.  It is a re-arranging the deck chairs solution that doesn’t address the real issue.  Dev resources are simply not going to be applied there.

I am interested to see what CCP’s plan for new player retention really is.  I said it was one of the top stories I was waiting for in 2019 a month back.  So far they have only mentioned continuing to refine the initial tutorial, which is what they have been doing off and on since the Cold War expansion nearly a decade and a half ago.  But that doesn’t take 80% of the team’s focus, so there has to be something else coming.  Or there had better be something else coming.

So that is my sense of the summit, the big picture take away.

There were some other side notes of interest in the minutes that did not necessarily relate to that though.  For example, I enjoyed the discussion of how CCP tracks players to assign where in space they live.  That ended up with several null sec people in the summit being flagged as high sec players.

In response CCP Larrikin put up this chart on Reddit which revised the long repeated “85%” statement made years ago. 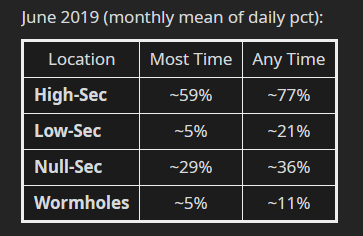 Null sec almost doubled its count in that version, up to nearly 30%.  There is still a question of how well that aligns with reality, but I guess we have a new benchmark that people will use as a bludgeon on /r/eve.

A lot of other stuff got hashed out, but there were no big revelations.  CCP said they were still evaluating data from the blackout.  The Triglavian invasion will carry on for a while.  Some odd/naive questions came up about what can be botted.  We learned what huge krabs wormhole players are.  And there was a session with Hilmar (which did little to reassure me on his new found interest in New Eden) which included a couple of charts whose labels give a pretty grim view of the reality of EVE Online.

Do you prefer apathy or boredom?  Are anxiety and doubt that different?

Also, there was a pulled pork recipe that looked pretty good.

Others have more detailed views on the minutes, some of which I linked below.  But you really have to dig through it yourself to discover it all.