It was announced earlier today on coms that SpaceMonkey’s Alliance would be leaving The Imperium.

The problems between SMA and the online gambling site I Want ISK at the end of 2015 led IWI to hire mercenaries to attack SMA’s home territory in Fade, one of the trigger events leading to the wider war going on today.

After months of fighting in Fade, SMA is down to a single system in the region, HHK-VL, along with 10 systems in Pure Blind, including two stations.  That at least puts them two stations ahead of my own alliance, TNT, which is fresh out.

SMA is the second alliance to leave The Imperium during the war. 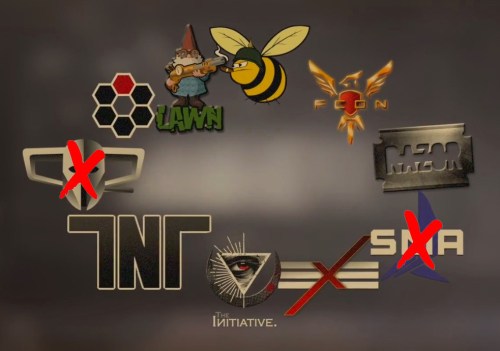 Unlike CO2, which agreed to swap sides to the Moneybadger Coalition and join the war against The Imperium before the battle at M-OEE8, SMA is leaving on good terms and is not being reset.

The SMA plan currently is to retire to the NPC null sec region of Outer Ring, home of the NPC faction Outer Ring Excavations, in order to rebuild.  The region is fairly barren of stations, but has connections to the Syndicate, Cloud Ring, and Fountain regions, .  They take with them a roster of ~2,400 capsuleers, down from ~4,000 at the beginning of the year.

And the war goes on.

These are great days we’re living, bros. We are jolly green giants, walking the Earth… with guns. These people we wasted here today are the finest human beings we will ever know. After we rotate back to the world, we’re gonna miss not having anyone around that’s worth shooting.

Life is heating up in the north end of null sec space.  As noted elsewhere, what has been dubbed the Casino War between SpaceMonkey’s Alliance and the gambling site I Want ISK has escalated into a concentrated attack on SMA’s home in the Fade region by groups hired by the gambling site to attack our Imperium allies.  SMA has abandoned their foothold in Cloud Ring and, after some of there own internal drama, set about to defend their space.

Of course The Imperium is there to stand by and defend SMA.  Reavers were recalled to the north.  Forces have been focused to help cover their space.

Suggestions by our foes that we reset or otherwise abandon SMA in the middle of this fight are beyond ludicrous.  Nobody gets reset in the middle of a war.  That is a recipe for disaster.  If anybody deserves to get cut, they’ll get cut when things settle down.

Besides, a war, one with regular action right in the middle of our home space, one that has fleets going up every night, with kill mails to be had, along with a brand new shiny doctrine to fly… well, is that made-to-order content or what?

So with that pot boiling, it seems like an absolutely perfect time to… tell the coalition to go play another game!

Yes, The Mittani is monetizing his followers in conjunction with Daybreak and/or/by (pick the one that suits your narrative) encouraging a team building expedition to PlanetSide 2!

As with the H1Z1 invasion last year, there is a code you can get from the site to collect a few exclusive items.

Official graphic or something

I think the “and more” is the title Imperator.

Members of The Imperium are being encouraged to run off and play… in the middle of our war… as part of the Vanu Sovereignty on the Emerald server.

On the upside of all of this PlanetSide 2 (unlike H1Z1) is free (to the point of being problematic for Daybreak), relatively stable (though we broke the server on the first night), and being a shooter, is easy enough to jump into and out of quickly if there are no fleet ops going on at the moment.

So, good line member that I am, I went and downloaded the PlanetSide 2 client again and started trying to figure out how to play over the weekend.  It is a shooter, but it is also an MMO with advancement and upgrades and a cash shop and blah blah blah… plus, while I played it for a bit when it launched, that was a couple years back.

I think I’ve sort of got a handle on the medic role at this point.  The graphics, and thus the world, as somewhat bland.  But for a shooter where you can get a hundred people in a pretty small area killing each other, that is probably a requirement just to keep frame rates up.  The cash shop is as confusing as ever.  I have nearly 12K in what was once Station Cash on my account from subscribing to EQ and EQ2 over the last few years and I couldn’t tell you want I should spend it on.  So it just sits in my wallet.

I’m also a little less impressed with the game’s Guinness Book record.  Not only was the number (1,158 players) something of a yawn compared to EVE (4,070 at 6VDT-H) but it is clear that it was an all effort staged event because there is a hard population limit… a limit which seems to be considerably lower than the record…  and a queue for continents when that number is reached.

But those are minor gripes.  The game is fun enough in that frantic way that shooters are.  A decent distraction.  And aim bots, often the bane of such games, seem to be under control.  It is hard to tell with snipers… and I get sniped often enough… but with combat in visual range nobody seems to magically hitting their targets, a situation even I have been able to detect in the past when playing shooters.

The small yet ironic twist to all of this is that our SMA allies in The Imperium were already active on the Emerald server in PlanetSide 2.  According to their Dead Monkey Gaming site, they were headed there last October.  However, they went to the New Conglomerate on the Emerald server while, as noted, the call from TMC has been to join the Vanu Sovereignty.

So we appear to be shooting Monkeys in our own way on Auraxis, the world on which PlanetSide 2 takes place.  I know I’ve been killed by a couple.  The timing of this is interesting, even if it is accidental.