Saturday night on Labor Day weekend found us again short a gnome as Bung ran off to the wilds of Northern Sierra-Nevada mountains, where we hope he was safe from fire.  So the group was:

We decided that the Oculus was probably off the agenda.

Instead we thought we might scout out the Trial of the Champion.

The Trial is a five person instance up at the Argent Tournament that involves a combination of jousting that makes up the tournament and old fashioned “kill the boss” fighting.

The first thing we had to do for this was to get Ula up to speed on the Argent Tournament.

Earl, Skronk, and Vikund had all, to different degrees, explored the tournament and figured out the whole mounted combat paradigm Blizzard has set out.

Ula, however, had not touched the tournament up to that point.  So we got her out there on the training horse and helped her through the first starter quest to give her a feel for things.

After our very quick intro course, we headed into the instance to give it a try. 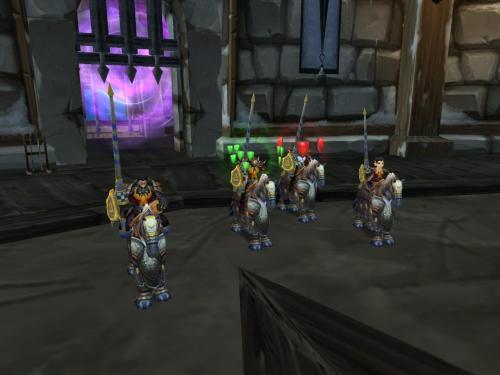 Mounting up in the instance

The instance actually provides mounts.  There is an ample supply of mounts around the arena.  Earl was the first to note that there was no “heal” feedbag button on our instance mounts.  If you get dismounted, or if your mount is low on health, you can grab a fresh mount.

Mounted up, we spoke to the guy in the center of the ring to set off the event.

This takes a while as three sets of horde riders, one boss and three minions have to parade into the ring.  Eventually they settle down the combat begins.

The minions were manageable.  They came at us in groups of three and we took them down readily enough.

Then it was the three bosses, and things got interesting.

We held our own for the most part, though things were rather chaotic.

Skronk got dismounted and killed, but found that he could just run back to the instance from the graveyard, mount back up, and rejoin the combat.  That seemed almost unfair, until we brought down the first boss.

The big orc was face down on the floor and we all went after the other two.  Then we noticed he was upright again and walking towards the edge of the ring.  He walked right to another mount, got on, and rejoined the battle.

Turnabout is fair play I guess.

That confused us for a bit, but eventually we delegated somebody to pound on the dismounted riders every time the stood up to keep them from coming at us again.  Doing that allowed the four of use to finally bring down all three mounted bosses.

At which point the instance turns into a more traditional battle.  Our mounts disappeared and the bosses all stood up and clobbered us.  We were there swapping our lances out for our regular weapons and trying to figure out who to go after while the bosses were making chutney out of us.

We were all dead in short order.

Fortunately, you do not have to replay the whole start of the instance.  Once you are done with the mounted combat, you can focus on your regularly scheduled character class.

So we were able to go back in, organize ourselves, get everything lined up, and get ourselves slaughtered again.

For the four of us, these through bosses were quite a challenge.  After a few tries we decided that victory was not going to be ours without our warlock.

We ended up just running some more quests in Icecrown, getting ourselves lined up to knock off a pile of group quests.  We did not, however, make it to those quests.  Like the Oculus, they will have to wait for another Saturday night.