This is my fourth September in review, since I passed the three year mark earlier this month.  The whole idea of a month in review started on a whim as I wanted to wrap up what had gone on that first month.  Somehow it became a tradition.  If you like the tradition, go me!  If you don’t like it, well, it is only once a month.

The BlogFlux Topsites “13 Watch” continues from last month.  I should probably just take that down and find something else to amuse myself, but being eternally in 13th place has also become something of a tradition.

This has also been the first month since I started the blog where it was not clear that the site would exceed the page views from the same month the previous year.  It just so happened that September of last month was a big month with a lot of stuff going on (see below) while this September has been somewhat more relaxed.  In the end, the page view count did pass last year’s September total.

Finally, I started what I plan to be a series of articles titled “Leuthilspar Tales” that present how things were on TorilMUD in the mid-1990s based on the experiences I and several friends had.  While they are mostly tales of nostalgia, they have some slight relevance to the MMO industry, if only because it was the same MUD that influence Aradune Mithara back before he was declared “stinky.”  I want to try to get a segment out every couple of weeks until I have beaten the elven experience in TorilMUD to death.  Then I’ll start in on the dwarves of Mithril Hall.

The one nice thing about articles about TorilMUD:  Not many screen shots! 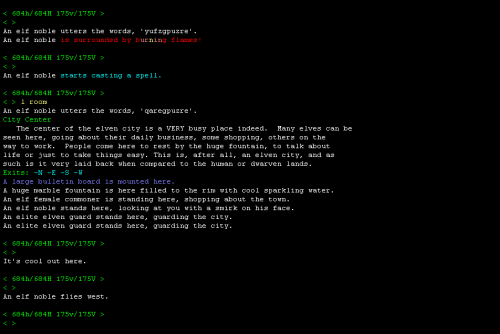 Unless, of course, you like screen shots.  That can be arranged. 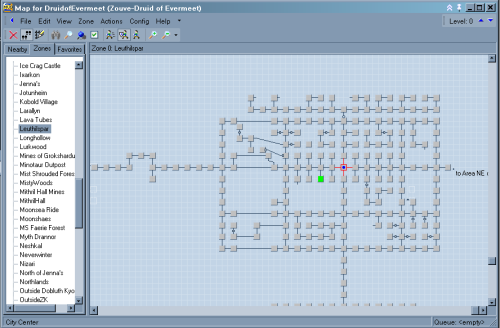 In that first screen shot, the description says that City Center is a very busy place.  I guess it might be for the NPCs who wander in and out.  But when it comes to actual players the place has been pretty dead for years now.

Warhammer Online went live, first with the head start and then for everybody.

As we just saw with Aion recently, there issues coordinating with friends about which server to choose, leading to yet another gripe post about the whole sharded existence we have to put up with in MMOS.  I did wonder if the EverQuest II mechanism of multiple versions of a given zone might be worth it to get everybody on a single server.

The instance group was game WAR, though as a group we have some parameters that we had to work within.

In Warhammer itself, war were declared on gold sellers and Mythic was being very demonstrative about it.  Of course, it did not seem to stem tells from gold seller bots that seemed to sit active for days.

I went on about those tips you see on the loading screen of many MMOs, spurred by a couple less than helpful tips in WAR.

In EVE Online I hit a major ISK milestone.  But I was building up ISK because I had my eye on a freighter.

The Empyrean Age 1.1 update was upon us, which included 2 changes designed to reduce the scourge of suicide ganking.

Meanwhile CCP was offering up battleships for sale… model battleship for real cash, not ISK.

And, finally, the site hit the two year mark.

I don’t plan to make this a regular feature, but I just thought I would mention that two years ago I asked if Tabula Rasa was the new Auto Assault, and action MMO doomed to an early closure.  I guess we have the answer to that question.

The following sites have been kind enough to link here.  Please take a moment to visit them in return!

Most Viewed Posts for September

Search Term of the Month

you can lead a noob to water
[I’m not sure where you are going with that, but I am suddenly thirsty]

I let my alt account lapse this month, so no mining or dual missions for a while.  The Hulk and Dominix and the sentry drones are hangered for now.

On my main I am closing in on being able to fly the Caldari marauder, the Golem.  The main question will soon be, do I spend the money on the skill and the ship? The package will run around 1.5 billion ISK for skill, ship, and fittings, and while I have that kind of ISK sitting around, I am not sure that it is worth it.  Golem prices seem to have soared since the crack down on the moon mining exploit a few months back.

And, finally, I may have to get out and run a few missions just to restock my sales inventory.  I’ve used up all my minerals and I’m running out of drops.

Lord of the Rings Online

I actually played LOTRO for a little while this month, rather than just do my usual “patch and quit” routine.  I got my captain up to level 31.  That still doesn’t get me into Moria, but it gets me a tiny bit closer.

The instance group still has three instances left to do in Northrend before we’re “done” with the non-heroic content.  It is still the contention of myself and Potshot that the group will probably want to take a break at that point.  I am going to guess that at some point between Halloween and Thanksgiving we will end up playing trying out another game.  There is still no decision on what that game might be.

Not that the instance group swapping games will be the end of WoW for me.  My daughter and I continue to play together and Potshot and I have been showing some interest in alts that I’ll get to in another post.

Leuthilspar Tales:  More installments.  I have actually been getting some help when it comes to remembering what was going on 15 or so years ago in TorilMUD.

The instance group: Will we finish up the last three Northrend instances by the end of October or will we get distracted by Brewfest and Hallow’s End?  Or maybe Blizzard will just throw some more content our way!

EVE Online: Will I actually leave the hanger?  Actually, I left the hanger a few times this month to go buy skills and haul trash, but it wasn’t very exciting.  Maybe the question should involve me actually firing a weapon.