Saturday night and it was time to face an instance that had already been described to us as annoying: The Oculus.

Through comments to previous posts, we had learned that we would flying on dragons for part of the instance, using the now familiar vehicle interface in WoW, and that the dragons would come in three flavors, DPS, Healing, and Tanking.

But dragons don’t enter into it quite yet.

First we had to get ourselves together and out to the instance.  Our group for the night was:

I will apologize in advance, but I have a 100+ post precedent of putting in our names and levels with each instance group entry, so I am going to keep doing it despite the fact that we’re all going to be level 80 for another year or so, at least when we are in WoW.

We headed out to Coldarra, which is out where we ran the Nexus back in April, grabbed the main quest for the instance, and headed in.

Well, somehow Bung missed the quest, and we didn’t noticed until it was too late, but four of us got it at least.

Inside there were some standard blue-ish dragonkin and whelps.  There was also an orb with the irresistible gear icon for “click me.”  Unable to restrain myself, I clicked on it, and it sent me back out of the instance.

Well, that wasn’t a completely useless bit of knowledge at least, knowing how to get out of the instance.

Once back and warmed up, we waded through the whelps and dragonkin until we reach a portal that sent us off to the first boss, Drakos the Interrogator. 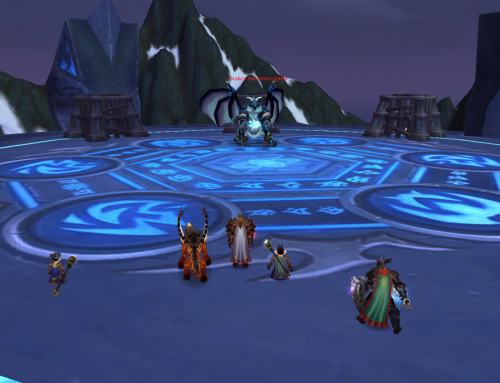 The Drakos fight went smoothly.  He had a few tricks up his sleeve, but we managed to plow through him.

Slaying Drakos opens up the flying part of the instance.  You rescue three NPCs at the far end of his platform, each of which can offer up a dragon for you to ride.  As I said before, the dragons come in Tank (Ruby), Amber (DPS), and Emerald (Healing) flavors.

We all chose dragons that represented our usual roles.  You don’t have to do that, but we did.

The dragons also come with an on-board navigation system that you can use to tell you what you need to be doing at any given stage of the instance.  This is nice since flying around it wasn’t always obvious where we needed to head.  So we all gave our dragons a try. 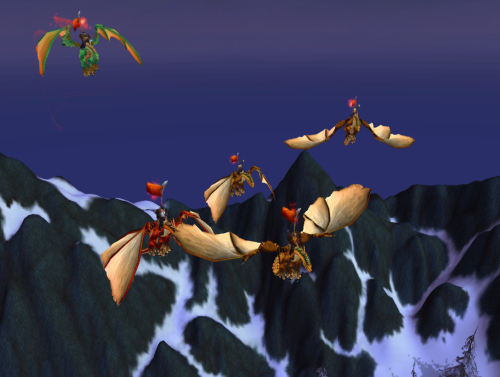 Flying in the Oculus

We were tasked with slaying the next boss, Varos Cloudstrider.  But to do that we needed to bring down a shield surrounding him by slaying a set of NPCs scattered about the instance which were, in turn, guarded by dragons flying around all the platforms and such.

So we killed the minimum number of dragons we could, landed and fought the shield NPCs group by group, and finally had Varos unshielded.

We then headed to his platform and took the fight right to him. 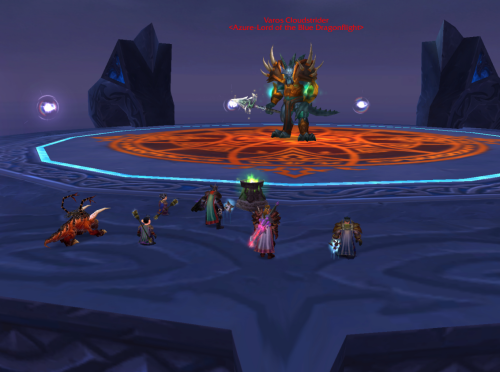 Varos had different plans however and stuck it to us instead.  We wiped.

We weren’t ready to handle two of his special attacks.

The first was his “around the clock” lightning extravaganza, where he sends out some test beans across a section of his platform, which is the warning that the real shock is coming soon so you need to get out of the way.

The second was his summoning loose dragons over to help him fight.

Now the first attack we would deal with.  Getting out of the way is something simple to grasp.  And the second, well, it seemed to us that if we killed all the dragons flying around, that would no longer be an issue.

So Skronk used the soul stone and started ressing us.

I accidentally released my spirit after the fight.  I’m usually good about that, but this time I did a quick click before I went, “Doh!”  Still, no big deal, right?  There was no loot roll and I could still be ressed back into the instance.

Except that, if you release, you lose the essence object that lets you summon your dragon mount.

So there I was back up on Varos’ platform when we went to start the great dragon slaughter and I realize I had no dragon.

So the rest of the team went off to slay all hostile dragons in the instance while I stood around wondering what to do.  You cannot, of course, use your normal flying mount in the instance.  So I took a few screen shots hoping to get a banner worthy picture while I pondered.

Being an engineer, I have a parachute enchant on my cloak.  I decided to see if, with enough forward velocity, I could para-glide down to the right platform to go get a replacement essence.  I summoned my ground mount, aimed for the platform, and launched myself, deploying the parachute.

Too much velocity.  I went sailing past my target and to the invisible “you’re dead” plane in at the bottom of the instance.  Dead again, I released, ran back, got a replacement dragon essence, and joined the group for the last bit of dragon clearing.

Now I read after the fact that killing all the dragons is not supposed to help, that Varos is supposed to summon them out of nothing.  However, in our second fight, the dragons didn’t seem to bother us so perhaps he summons them to him from all over the instance.  Or maybe I just didn’t notice them.

Anyway, the second fight was a success.  The casters got fried towards the end trying to out run the lightning storm, but it was late enough in the fight that Varos was going down regardless. 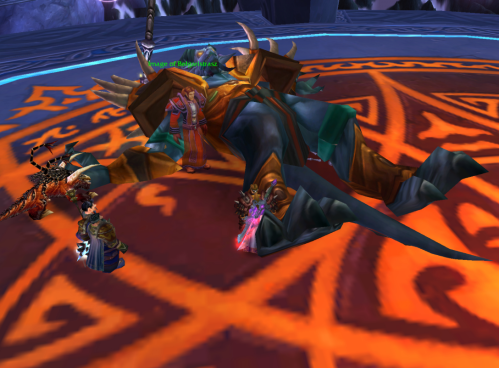 Varos down, the quest continues

With Varos down, the next stage opened up, which involved flying around in pursuit of Mage-Lord Urom until he finally settled down in the middle ring of the instance.  Then the fun began.

Urom is one of those fights where there is a right way to handle his attacks.  Our first run at him gave us a bit of an idea of what we would need to do to defeat him.  We had not quite figured out the right method for the second fight, but thanks to a combonation of luck, frost resistance, healing pots, health stones, bandages, paladin heals, and a timely lay hands, Earl and Vikund were still standing when Urom went down. 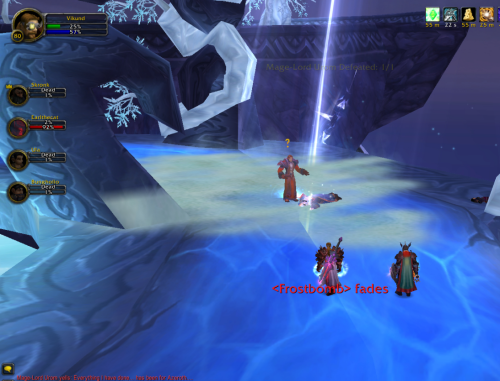 Urom dead, along with most of us

It was a near run thing with Earl down into 3 digit health numbers.  We probably learned enough from that fight to do it again without losing most of the party, but we probably won’t be back, so we’ll take our victory and move on.

So we came to the last fight, the big fight, the fight with Ley-Guardian Eregos.  We mounted our own dragons and flew out to take on

And it was pretty much a walk-over.  Really, it seemed way too easy.

We pretty much operated as we had done previously when mounted.  You get a new ability for the last fight, or at least the DPS mounts did.  We kicked off the fight, the tank tanked, the healer healed, the DPS damaged, and Eregos went down.  It looked neat. 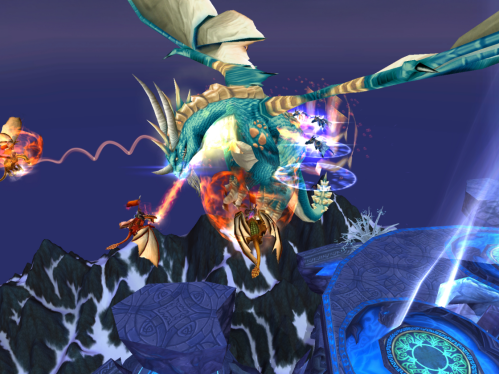 Every so often whelps would spawn around him as part of the fight, but they seemed to get consumed as part of our general storm of damage, so that was that.

We had to fly around to find where Eregos landed for the final screen shot.  He ended hung up in the center platform area where Urom was wandering earlier. 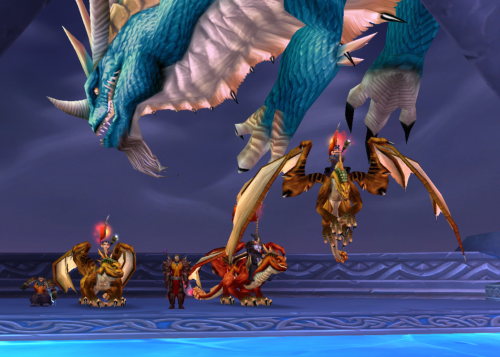 Victory in the Oculus

We ran around afterward and found the chest that Eregos leaves behind.  The haul there included the Vestments of the Scholar

With the Oculus defeated, we are only left with three more five person instances in Northrend, the Culling of Stratholme, Utgarde Pinnacle, and the Trial of the Champion.