Certainly Sony Online Entertainment has given us a lot to chew on with their announcement of EverQuest II extended.

Let me put up that chart again. 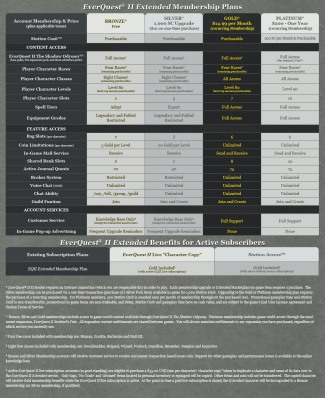 Certainly, the idea of free EverQuest II has appeal.  Free anything does.

There are also obvious downsides illustrated by this chart.

If you are a current EverQuest II subscriber, I am sure that none of the subscription models hold a lot of interest.  For $15 a month, you’re already getting more than what is being offered for $200 a year in some regards.

And the idea of playing under the restrictions imposed by the free version of the game… well, let’s call those out.

Now, certainly from a the perspective of a current player, this probably looks like something of a nightmare scenario.

But you can view this from another angle.

Back when many of us were playing the original Diablo, after having mastered the basic game, used to try to defeat it in other ways.  One way was what we called the Iron Man method.  You and your friends went into the dungeon and were not allowed to leave until Diablo was defeated.

No going back to town to sell, buy potions or equipment, repair, or take a breather.

You had to survive off of only what you could pick up.  And if you died along the way, the attempt was over.

Now EverQuest II offers a similar sort of Iron Man option.  Call it Inconvenience Man, or the Trial of Inconvenience.

This is actually a viable game play style, since SOE plans to offer all the content and then sell convenience items as opposed to Turbine’s approach to F2P with LOTRO, where they will be selling both convenience as well as content past level 20 or so.  You could still do an Iron Man attempt at the level cap in Middle-earth of course, but it would mean grinding mobs from level 20 to 65.

What do you think of a Trial of Inconvenience attempt at the level cap?

I would suggest picking a server and forming a guild for a group attempt… but you cannot form a guild without paying in and getting some of the convenience.

18 thoughts on “EQII Extended – The Trial of Inconvenience!”