Our latest drive towards Moria continues, with varying degrees of success.

Gaff, who has a lot of free time in the summer, has actually made it into the expansion, going from level 33 to level 52 in under two weeks.  His main character, Rarik, has even picked up some interesting equipment on the way.

And, as of last night he had finished the preliminaries and was into the Khazad-dûm proper.

Gaff has been good about trying not to spoil things for me as he has moved along.

And how have I been doing?  I had a serious head start on Gaff, with a level 44 hunter loose in the Misty Mountains.  You would think with more than a 10 level head start I would be there as well.

But no, Selirus, my hunter is still in the Misty Mountains.

He is level 46.  So some progress was made.  And it is not as though I have not been playing some.  I just got distracted.

Selirus is a hunter, but he is also my weapon smith and woodworker.  And while the ore in the Misty Mountains has kept him going on weapons, he needed wood for wooden weapons, like bows and spears and javelins.

And to get him the right wood meant getting my warden, Terentia, into the Misty Mountains as well.  However, she was only level 38, a bit low for that, which meant a detour into other zones.

One of the tricks to smooth progression in LOTRO seems to be finding the right group of quests.  You really want to be in a range of quests that are about +/- 1 level from you.  Running quests more than two levels lower  and you start to see some serious drop off in the experience rewarded.  The same goes for the mobs you have to kill.  While any quest more than a couple of levels high than you slows you down through difficulty and there is clearly a cap on the experience you receive, so it is better to wait until they get closer to your level range.

Terentia, at 38 ran around a bit looking for the right fit.  She was in that gap in the Trollshaws where she had finished one set of quests but the next were four or so levels above her.  Likewise, Angmar started at about the right level, but quickly skipped up a few levels.

In the end it was back to Evendim, the land of the lake.

Looking out in Evendim

Evendim has a bad reputation.

The last time I wrote about it, I heard some moans about it in the comments.  And it sure does have more than its share of annoying, multiple round trips across the lake or half way across the zone, quests.

The thing is, the zone also hides some of the better quest lines I have seen in the game.

After running her through the quests around the tombs of the kings, which was a joy in that the second and third rounds of it were concentrated in a small area, the quest chain pointed me in the direction of Annuminas.

Just getting there was a pain.  While there is a stable master at the ranger camp deep in the heart of the area, you have to fight or sneak your way through a mass of Angmarian invaders.  Previously this was enough for me to go elsewhere with Selirus, but I decided to stick it out with Terentia.

And, in doing so, I was rewarded.

Most of the quests there were of the ordinary sort; go find things or kill things.  There is a task board there, so you can turn your trash drops into reputation and experience.

And then there is Orchalwe’s Mission.

Orchalwe wants to go kill some things and hang some ranger banners around Annuminas.  But unlike your typical LOTRO ranger, Orchalwe actually comes along to help. 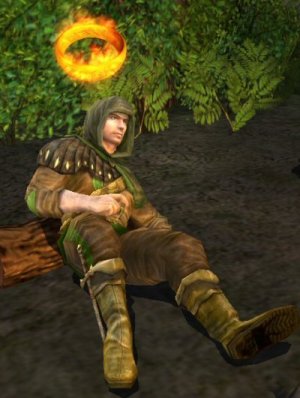 Hey, I pulled a muscle! Give me a break!

And that is the reason it is a pain even getting to this quest, becuase everything in the area is tuned to you and him fighting through to various objectives.

And, as a variation, that is nice.  He is tough, hits hard, and heals now and again.  But as you pass through various locations, he comes up with a quests for the places you visit.

So rather than stacking up an armload of quests and running all over, you end up following one main quests, hanging ranger banners, and get a steady supply of side quests as you go.

The whole cycle with Orchalwe is challenging.  Mobs come in groups of two or three and it is very easy to get in over your head if you are not careful.  The side quests as well run the gamut of burn, kill, collect, rescue, and defacement, so add a nice bit of variety.  I began to look forward to each new area just to see what quest would come next.

The only problem came at the last banner, out on an island which required us to cross a bridge.  The area before and around the bridge was populated by signature level mobs, tougher than standard mobs, but still manageable.

At that point the groups started showing up very close together as well.  Adds started coming in on almost every fight.  We were defeated several times at the foot of the bridge.  That left us having to fight our way there again in the hope that we could make it this time around.

Eventually I decided to move on and do something else, which was disappointing.  If I had been close to getting through it might of been one thing, but we were getting pounded to pulp at the bridge every time.

And by this point Terentia was 41 and ready to hit the Misty Mountains to harvest black ash.  She did that and passed it on to Silinus, who in turn mastered the 5th tier of woodworking.

Silinus was thus able to arm himself with a new bow and a pair of new daggers, as well as making Terentia a new spear and javelin.

Silinus was now armed for his assault on Moria.

Of course, in the time it took to do all of that, he probably could have made it there without the new bow.  His old bow wasn’t that bad.  The perils of a completionism I suppose.

And Potshot has himself patched up and is threatening to make his own assault on Moria.  He will be starting from level 34 or so.  I have a couple of characters in that range, so I hope we can coordinate things to meet up in Evendim and finish off Orchalwe’s quest.  I would like to see that one through.