This is the reason I keep Kotaku in my RSS read… for every hundred Japanese trends or cos-play articles, there is a gem I never see elsewhere… like this one.

As foretold by prophecy… or at least by my nearly four year old blog post… there could be a LEGO Lord of the Rings Video Game.  There will at least be LEGO Lord of Rings sets, but how can they do that and not a video game?

Actually, I would bet there are going to be three games, if any video games come to pass.

Probably none… I was being kind of silly.  But of the most serious two I asked for, one came to pass and the other looks like a solid “maybe.”

Star Wars Galaxies, that is, because last night was it, the end.  The servers are down and the game is no more.

But when I logged in, the results were in for the Galactic Civil War.  The Rebels took the war with a score of 10 servers to only 4 for the Imperials. 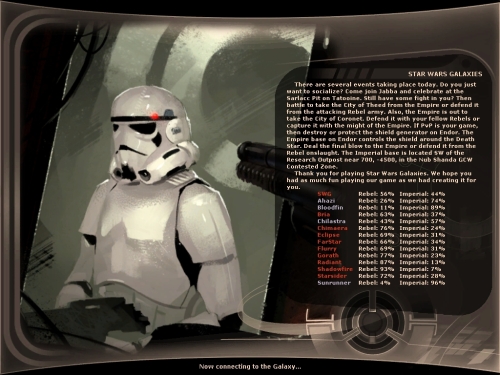 It is like the basis of an alternate history novel.  How did things play out on, say, the Sunrunner server, where the Rebels only got 4%?  Is that the version of where Luke doesn’t leave the homestead and gets killed with his Uncle Owen and family when the stormtroopers show up?

Bloodfin, where the Rebels eked out 11%, must be the version where Darth Vader says, “I am your father!” and Luke says, “Really? Cool!”

I always picture myself saying that in Luke’s place.

While on Starfire, where the Imperials only got 7%, Luke defeats Darth Vader on Bespin while the Emperor slips on a bar of soap in the shower, cracking his head open and killing him.

And on my own server, Bria, the Rebels won, but only with 63%, which probably means that was the version where Lando and Wedge fail to get out of the second death star before it blows up… and all the Ewoks die due to debris raining down on Endor.

But any victory is still a victory, and so it was proclaimed.

Not sure who she was, but if they are casting for a Popeye MMO, she should try out for Olive Oyl.

The skies of Mos Eisley were filled with fireworks and rebel ships doing fly-bys.

Meanwhile, in town, rebel troops were marching, counter marching, beating up suspected Imperial sympathizers, and collecting New Republic “taxes.”  Cash only, please.  No, you cannot have a receipt. 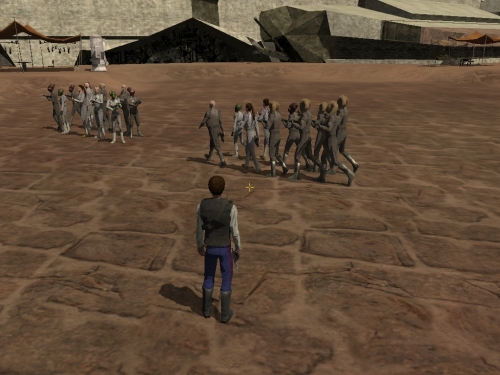 When I say, “Your left,” your left foot hits the deck…

Thinking this might be a good time to stay out of the way, and wanting to accomplish something on the last night of Star Wars Galaxies, I decided I would try to see at least something new on Tatooine.

I decided on Jabba’s Palace.

I managed to figure out how to get a waypoint set for the Palace and set off following the arrow in my X-38 Landspeeder.

A starter vehicle, modest in all respects

I didn’t get anything like that in SWTOR, let me tell you.

And it was then I discovered what a wasteland Tatoonie really was.  Desert is bad enough, but suburban blight had totally taken over.

And it just went on and on and on.

I get that a lot of people really, really liked having not only a house in the game, but having that house exist as a separate physical structure rather than a door to 100 or so instanced versions of the same house.  But the downside though is easy to see.

On the ride from Mos Eisley, through Anchorhead, and to Jabbas Palace, there were only really breaks in the housing immediately around the towns and again at one point of interest, the Lars Homestead, along the way.

One clear spot, but I could see houses in the distance

Well, there is no point in kvetching about it now I suppose, but I just want to remember the endless sprawl as part of the whole.

I continued on towards Jabba’s.

Sooner than I thought it would, Jabba’s palace hove into view.

They let me in and I found my way around into Jabba’s chamber.

And that is where I spent the remainder of the time SWG had left.  For a while it was just me and some of the standard cast. 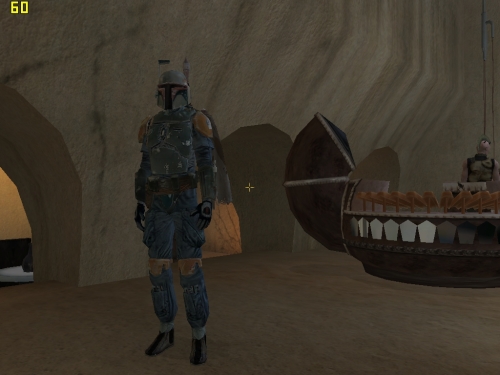 His father was a much better dresser

A couple of other people showed up, choosing Jabba’s palace to be their final resting place in SWG.

It is what you do at a wake…

I listened to the players, long term veterans of the game, talk about the game while we were reminded every minute that the server was going down and that we should go some place safe to log out.

There was a last minute visitor who came to give Jabba his last regards.

Time to settle up

And then acted on his threat.

And so I recorded Semmi Vipra’s last act in the game.  Soon the count hit one minute. 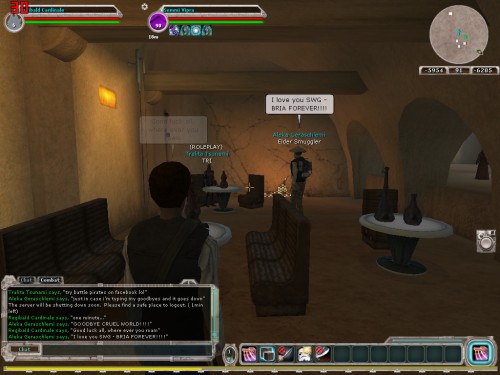 And then the moment of truth came. 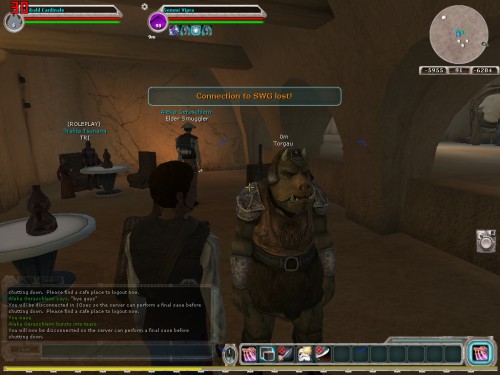 The connection was down, the game was over.

And so ended Star Wars Galaxies, a game with many high and low points, a game distinct in many ways, a milestone in MMO history.  The official site now has a final message from the SWG team.

A Thank You to the Star Wars Galaxies™ Community

Looking back on Star Wars Galaxies and all these years I am so thankful for being able to be a part of the Star Wars Galaxies community both as the Producer and as a fan. It would not have been the incredible experience that it was without you, the players and fans, the dedicated team of people who worked on it over the years and the fantastic Star Wars® galaxy itself, which offered us a very unique and compelling place to explore, fight, play, make friends, and build our homes.

This is a book of memories, so let me start with a few of my own.

When I was a little boy, my father brought me to the movies to see a new science fiction film that he heard was pretty good. What I remembered most was the feeling of awe I had back then, and still feel to this day. Once I had experienced Star Wars, my life would never be the same again. In May of 2004, I walked into the office at Sony Online Entertainment to start a new job working on a game based on the very same story that had amazed me in my youth. Cool! I was very excited. All I wanted to do then was learn how this thing worked, and I spent the next seven years doing just that. I can say that not a day passed in the development of Star Wars Galaxies where I didn’t learn something new. Each day presented different challenges and solving them was always a rewarding accomplishment. It is everyone’s hope to find a job that you look forward to each and every day. Being a developer on Star Wars Galaxies was just that kind of job for me.

Star Wars means something different to each of us. That’s why we played Star Wars Galaxies. On June 26th, 2003, SOE and LucasArts released Star Wars Galaxies and, for the first time, you could play online with your friends in the Star Wars universe. I was amazed at how much there was to do in the game – player housing, crafting, entertaining, combat, and more. One of the most exciting times for all of us on the team was the launch of the Jump to Lightspeed expansion, which let players fly and battle it out in space in a true 3D simulation. Now we could all truly live out our Star Wars fantasies. It was like being a kid again.

Giving players a chance to live out that Star Wars fantasy has been the best part of the job. Some of my favorite memories include fighting Imperial forces on Hoth in the Battle of Echo Base, seeing those first player-created quests in the Chronicle Master System, fighting the undead in the Death Troopers update and, probably best of all, taking part in invasions and actually getting to make a difference for my faction in the Galactic Civil War.

From my first day to the last, Star Wars Galaxies was, and will always be, a meaningful and memorable part of my life, an experience I’ll treasure and share with anyone who wants to hear a good story. It has been an honor to take this journey with you, the community and all of the team members who have made Star Wars Galaxies such an awesome game.

On behalf of the Star Wars Galaxies team, thank you. We have truly enjoyed getting to know you – our dedicated players – over the years. From in-game events to Fan Faires, we appreciate your continued loyalty and support. It would not have been possible without you.

May the Force be with you. Always.

There will be a memory book posted at some point.  And that is all that remains.

[Addendum: The SWG Memory Book is now available, as noted over at Massively.]

[Addendum 2: Oops, it is gone now, along with the SWG site.  I hope you grabbed it already!]