Although I spent Christmas in empire space, thanks to the magic of jump clones, packing up some stuff to be shipped out to null sec, I have been keeping an eye on communications and other bits of intel that find their way to me, usually via Gaff.

It seems that White Noise had a meeting of their own which, like the last State of the Goonion, shortly found its way to the web in audio form and is posted, along with a summary, over at EVE News 24.

Some of the key items from that:

So, with that in mind, here is the sovereignty map for December 27th, borrowed from here: 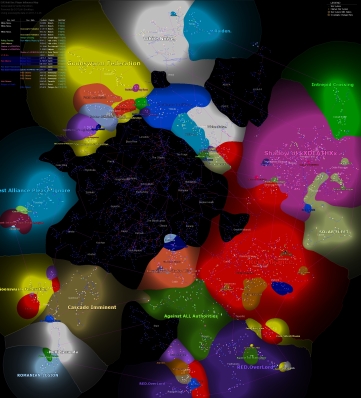 If things go as planned for White Noise, most of that big yellow splotch in the upper left corner should be gone.  That little purple patch as well, which is where I live when I am in null sec.

We will have to see what the map looks like on February 1st.

Until then I have a bunch of mining equipment set to to be shipped out to Deklein.  I need to start making some money somewhere along the line.

Though, I suppose if it came down to a desperate moment (it won’t), PLEX recently hit a new all-time peak price.  According to the November EVE Price Index, PLEX was selling for nearly 500 million ISK per unit at one point before settling down a bit.  Lots of ISK out there chasing PLEX I guess.

And the war, in which I played a very small part one night, goes on.