Gaff has been telling me I should come to 0.0 space in EVE Online for a while.

Lacking any real motivation to pick up where I left off with any of the Empire space activities, this time around I said sure.

He went off and figured out the easiest way to get me out into null sec space, which first involved joining his corp.  That seemed to be no issue with his personal endorsement.  My interview with the corp CEO basically amounted to him asking if I knew what I was getting myself into, me saying “Not at all!” and then Gaff saying he’d hold my hand until my head stopped spinning.

Then there was some work on my part transferring the CEO position of the Twilight Cadre to an alt, which took me a while to figure out. (Forgot you need to have actual skills for that!)  Then I applied for membership in the his corp, waited 14 hours for my past roles and the like to get removed, and then I was in.

In, and ready to fill out forms, download software, get an API key with the correct data set, and so on.  Gaff’s corp is in an alliance that is allied with the Goons, so security is a priority.  Corps with security issues find themselves in trouble and sometimes… I think this is the right word… “commissared.”

Then I moved into one of my jump clones without implants, moved my medical clone to one of the stations in their zone of control, and self-destructed. 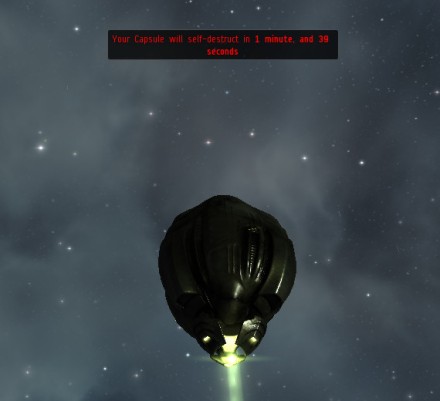 Self Destruct Count Down

My death transported me to my clone in 0.0 space.

I was also handed a shiny new Ibis by the Secure Commerce Commission, the insurance people.  Handy in 0.0, I am sure.

And so I am in wilds of null sec, which I am told is both much safer and much more dangerous than empire.

I have seen my first player owned station.

I'm the tiny little Ibis in the middle...

My map of visited systems will soon have some new entries… I hope.

Where I had been up to this point...

Anyway, I have a billion ISK, 70 million skill points, I am in null sec, it is dark, and I am wearing sunglasses.