Several of us in the guild have been working on various reputation tasks with factions from past expansions.  The objective has generally been mounts.

This has meant quite a bit of stomping around in older instances to earn rep or to get specific mount drops, like the Bronze Drake.

Skronk, myself, and Earl on various mounts

This is, of course, part of the reason that Blizzard’s outlook on this sort of thing… and their plans for “The Squish”… were of interest to me this past weekend.  I was wondering if we might need to hurry things along or if things would remain as they were post-squish.  For now it looks like old instance venturing will remain the same. (Which makes me wonder about the necessity of “The Squish,”  since, to me at least, we are just talking about numbers.  Once you get used to doing, say, 50K DPS (or 30K or 90K or whatever), it seems pretty normal.)

Anyway, we’ve all been running off in various directions.  Earl did a quick grind for the Cenarion Expedition to get their War Hippogryph, shown in the picture above. (Next to my Silver Covenant Hippogryph, which I earned at the Argent Tournament back in WotLK.)  Skronk and Ula were off after exalted reputation with the Wyrmcrest Accord to get their drake mount.

I went in a third direction, back (again) to Outland in pursuit of the Netherwing Drake mounts.

I won’t detail the whole process of getting there.  There is a good write up over at WoW Pro that goes into all the details if you want to do this (and which I only found AFTER I had finished the whole thing and started writing this post).

This was one of those medium term objectives that I can be pretty good at where, after the initial quest line, you have to log in every day and spend about 30-45 minutes running a series of daily quests.  A reasonable objective for the holiday season, and one helped along by the fact that we had hit level 12 with the guild, which gives members a 10% boost to faction rewards for quests and such.  Between that, and the Netherwing Egg wildcard, I was able to finish in 11 days, which the guide puts the process at 15 days.

Once I got there, I was off to the races and I eventually managed to become exalted with the Netherwing, complete with backported achievement for the whole thing.

Ta daa!  Another faction grind complete and a few more mounts in my collection.

The interesting thing about this whole run was how different it felt compared to similar faction quests I have been plugging away at in Pandaria.  If the latter represent the “state of the art” for Blizz, whatever that might mean, then the Netherwing are… strangely primitive.

The quest mechanisms themselves are fine.  These were the very early days of the whole daily quest idea, and Blizz seemed to think it was just fine to make you do exactly the same thing day after day.  No variety.

I am going to guess that they were not sure that many people would even buy into the whole daily quest thing.  Granted, you need artisan level flying to even get this quest line, which was a pricey option back in the day.  But still, the dailies are such that if two people are trying to do them at the same time, you will notice, and three or more people will have a serious impact on your ability to get them done in a reasonable time.

But the thing that struck me every day was the somewhat schizophrenic nature of the quests.  The idea is to get exalted with the Netherwing.  The initial quest line gives you a buff that disguises you as an Dragonmaw Orc, and your mount as a Netherwing drake, so you can infiltrate the orcs who are breeding them for their use.

If I understood the initial quest line correctly, the Netherwing are not happy about this. Neltharaku gives you lecture about it, Karynaku is chained up in the Dragonmaw Fortress and you have to free him.  It seems like you’re going to go in there and help the Netherwing stick it to the Dragonmaw.

And then you start doing the dailies and you find yourself hurting the Dragonmaw at times and helping them out at others.  My favorite bizarro world pair of quests are the ones where, with one quest, you are poisoning Dragonmaw peons to stop them from working, while with a second quest you are beating idle or disgruntled peons (with the Booterang) to get them back to work.

So every day I was out there interdicting their supplies and poisoning their peons while also killing their enemies, punishing their slackers, and helping them with their whole mining effort.  And the whole thing ends up on an even stranger note.  Finally, when you get to exalted, Illidan… or a shadow form of him… shows up, sees right through your disguise, and just before they do you in, you are rescues by a Netherwing dragon.

Carried off on the back of the Netherwing

The dragon takes you… slowly… off to Shattrath where you get to finish up the whole quest line.  This includes picking ONE Netherdrake to add to your collection of mounts. 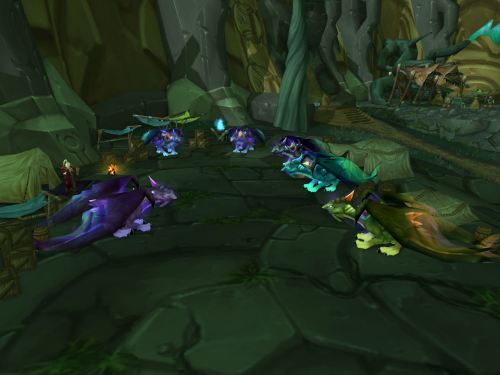 So you’re done, right?  One Netherdrake is all you get?  The guide I linked above seems to end on that note.  But what about all the other models.  Can you buy them?  They seem to be all lined up like they were for sale or something, right?

However, if you fly all the way back to the Dragonmaw base camp, where your orc illusion will still activate and where they will have all conveniently forgotten about what just happened between you and Illidan, you will be able to hit up Drake Dealer Hurlunk in the middle of the camp and buy the other five Netherdrake models.

This was actually the bit I knew about in advance, and one of the reasons I chose run down this faction quest.  Six excellent looking mounts waiting at the end were reason enough.  And the fact that they were only 200 gold each… which is laughably cheap in the age of Pandaria… sealed the deal.

So I am quite happy having spent my time on this.  My favorite out of the bunch right now is the Veridian Netherdrake, by virtue of being the “different” color scheme out of the bunch.  Plus I rarely ever see that model out and about.  Though, with so many mounts in the game you could say that about many of the older models.

Veridian in the Vale

But I have to imagine that some designer at Blizzard is mildly embarrassed at how odd or rough the whole Netherwing faction quest line and dailies look in 2014.  Or maybe not.  Daily quests were a new-ish thing in WoW.  Mounts took up bag space.  And the fast flying skill was and expensive thing for most players.  It was a different time.