While EVE: Valkyrie is targeted at the well-known, Facebook-owned Occulus Rift VR platform, EVE: Gunjack is slated for Samsung Gear VR option.  Samsung Gear VR incorporates some of the technology from Occulus Rift, so it includes the head tracking aspects of the latter.  But the Samsung unit does not include a built-in display, somewhat akin to the Google Cardboard VR unit, requiring users to purchase specific models of their Samsung Galaxy Note 4 line to act as the screen.

Because of the overlap in technology between the Occulus Rift and Samsung Gear VR units, I am not sure that this represents a doubling of CCP’s investment in Virtual Reality, but they do seem keen to jump on the VR bandwagon despite the motion sickness concerns and the need to buy a somewhat expensive unit that you then have to strap to your face in order to use.

But they now are working on twice as many VR titles.

Set in the EVE Universe we all know and love, the player takes on the role of a turret operator aboard a mining rig out in the nullsec region of Outer Ring. As part of the defense team, it’s up to the player to protect the rig from pirates, opportunists and anyone else looking to take what rightfully belongs to the company.

Maybe more Space Engineers or SCV’s Online than a space warrior sim?  It is hard to tell.  The screen shots show more “doing” than “shooting.” 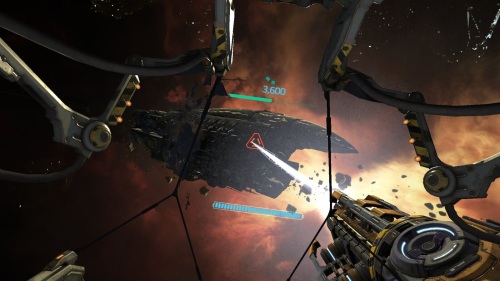 Anyway, that adds another title to the CCP lineup, which to date looks like:

Anyway, that is what CCP has… so they clearly need to keep EVE Online running for a few years longer to pay their bar tabs.  Or bring back Quafe.  I’d buy some of that.

6 thoughts on “CCP Doubles Down on VR with EVE Gunjack”