The news popped up yesterday that Minecraft sales had exceeded 100 million copies. 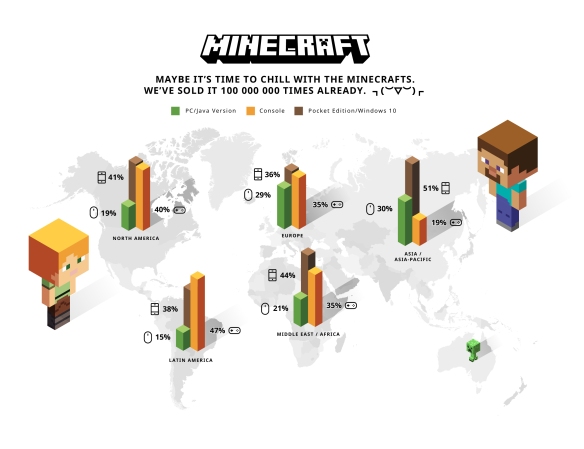 Who buys which version where…

The number, as of June 1st was actually a bit past 100 million. 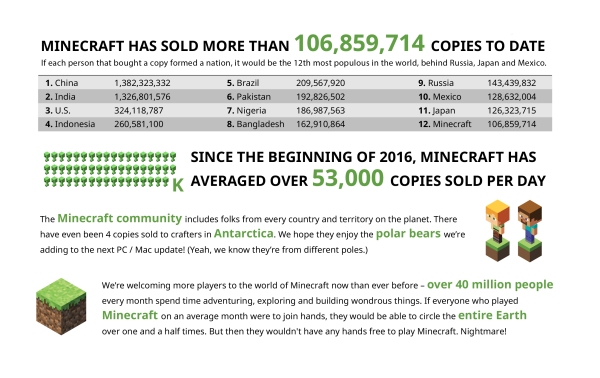 Complete with delusions of sovereignty

Probably more surprising is that the game has sold, on average, 53K copies a day in 2016.  Not bad for a game getting to its fifth birthday.

Over on his blog SynCaine attributes this to the idea that good games simply do well.  That is underselling the achievement by a long shot.  For a cross platform title that puts Minecraft behind only Tetris, which has sold nearly 500 million copies in the last 30 years, appearing on platforms as diverse as programmable calculators, iPods, just about every gaming console ever, and whatever OS you happened to be running back in the day.

SynCaine then proceeds to bait the bear that is World of Warcraft, opining that if only Blizzard hadn’t started to make the game suck after The Burning Crusade the game would still be growing today.

This is a bad argument.  Or, at a minimum, an argument that doesn’t necessarily follow from Minecraft’s success.

To open with, the comparison appears to be subscribers versus total sales.  Total units sold would be more apt.  But we do not know how many copies of World of Warcraft Blizzard has sold.  Furthermore, even if we did, I would argue that for this measure, we should count not just copies of the base game, but also every copy of each expansion as a sale, at which point it isn’t hard to get to a number that surpasses Minecraft, at least on the back of a napkin.  WoW had already passed 100 million accounts created two and a half years ago.  (Complete with required infographic.) All of them may not have bought a copy of the game, but a lot of them bought a copy and an expansion or three. 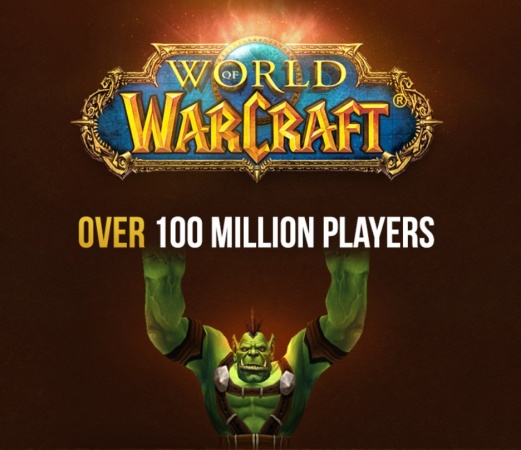 WoW has been growing this whole time, if you just count people who have played as opposed to those currently subscribed.  After all, one item you can derive from that Mojang chart is that 66 million people who bought Minecraft don’t bother playing it on any given month even though it is free.

Then there is the whole pricing aspect, because WoW and every expansion has cost more than a copy of Minecraft, and then there is a subscription on top of that, something that chases some people off.

But there is really one key difference between the two games that will keep WoW from ever having a chance to do what Minecraft has done with such a small team.  You can leave aside things like price, expansions, subscriptions, and all that, because to my mind it comes down to one main item:

They make the client and an open source version of the server… but all you need is the client… and have left nearly everything else to the community that has formed around the game.  It is all in the hands of the players.

Don’t like the default settings?  Change them!  There aren’t enough settings?  Run a third party version of the server!  Don’t like the looks or want some new feature?  There is probably a mod for that!  Don’t like the current version?  Set the client to run an old version!  Want somebody to host your server?  So many choices!  Play solo?  Check!  Play with friends on a closed server? Check!  Make an open server for anybody?  Check!  PvE?  Check!  PvP?  Check!  Creative mode?  Check!  Hardcore perma-death?  Covered!  Special maps?  All over the place!

And yes, not ALL of those options apply to the three versions of Minecraft.  Again, the PC Master Race gets the greater range of flexibility.  But even on the console version, the most limited of the three, Mojang still doesn’t make content.

Meanwhile Blizz needs to come up with new content every year… though they can only manage to do it every other year… and every new change or expansion alienates somebody from the installed base.  There was no perfect path forward that would please everybody.

And you can’t just set the client to run WoW 1.8.1 or some such because you liked how things were in 2006.  Meanwhile the market closed in as the flip side of everybody making what essentially became niche WoW clones means that the player base has other options when the current batch of content wears out.

Even League of Legends, which SynCaine also brings up, depends on Riot not screwing up balance too much and to make new variations of the game and to stage big events and the like to draw attention to the game.

Mojang has created a sandbox game that has achieved a life of its own.  Even the space-sim-sandbox of my heart, EVE Online, has to provide content for its players.  Minecraft just drops you in a fresh world and tells you to punch a tree.  You want something?  Go build it.  They don’t even care about a player economy.  Design it away?  It’s been done.

Furthermore, as far as I can tell, Mojang barely markets the game… and still they are selling 53K copies a day.  And then there is all the revenue from licensed products like shirts and foam picks and LEGO sets.  They have created something special here.  It is beyond being a game, it is practically an ecosystem.

Minecraft is one of those odd exceptions, beyond merely “good game sells well,” one of those games that was in the right time and place for success.  But then again, so was WoW.