My Aunt moved earlier this year and, in cleaning out her house, came across any number of items that had been stored away for years.  One of them was a typewriter. 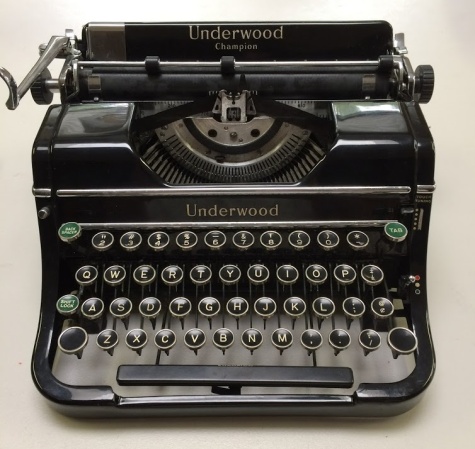 Nothing to do with deviled ham

Probably one of the reasons I have done as well as I have in the computer age, or the information age, or whatever we end up calling this era, is that I learned to type at a fairly young age.  And the first place I started was with this typewriter.

A look under the lid, the ‘N’ key is the one sticking up in the bunch… we’ll get to that…

That is a 1937 Underwood Champion portable typewriter that my grandmother hauled off to college when she was 18.  It was portable by virtue of the fact that it came with a hard carrying case with a handle. 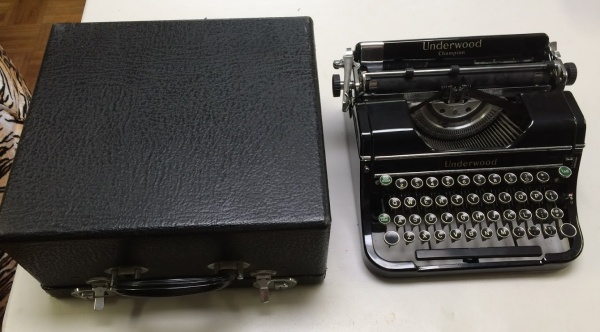 The typewriter sat in that case in the hallway closet at my grandmother’s house and when I would come over to visit I would often haul it out to bang away on it just for the feel of putting words on paper.  There was something about that action that made words feel more “real” or “official” to young me.

Later I would take typing in school and get my own typewriter, an Olivetti Lettera 32.  It was also a portable, though considerably smaller and lighter than the old Underwood.

That was probably a fitting choice of brands as the Underwood company was purchased by Olivetti back in 1959.

I do not know where the Olivetti ended up.  With the coming of my first computer I immediately started shopping for a printer and what passed for a word processor back then.  After some fumbling about I got a copy of AppleWorks for my Apple //e and was off to the races.  At that point the typewriters went back into storage, rarely to be heard from again.

Now I write a blog on much more sophisticated (or bloated… or both) software and share some of my words not on paper but electronically across the world via the internet, but I still put my fingers on the same keyboard layout I started to tinker with back in the early 70s.

And it was the internet that helped me figure out how old this typewriter was.  There is no date of manufacture stamped on it that I could find.  But I could see a serial number stamped into the frame.

Serial number inside the unit

With that number I was able to use Google to find the Typewriter Database site which includes a page of Underwood Champion serial numbers by year.  That pinned down the year, which lined up with my grandmother graduating from high school and heading off to college.

The typewriter itself still looks to be in prime mechanical condition.  “They don’t make them like that any more” might be cliche, but it has some grounding in reality.  And among the other things you can find on the internet are ribbons compatible with it.  I am sure the ribbon in there hasn’t been replaced since the 1950s at the latest.  There is scant print ability left in the dried out husk that is in it currently.

Some words are just visible

Actually typing on it requires quite a firm touch.  I recall how my grandmother used to brutalize the IBM Selectric in the library where she worked, pounding on those keys that would activate with a much lighter touch.  The mechanical operation requires you to push it, and hitting the shift key lifts up the entire platen unit, so not something you can do without a pinky that has been working out at the gym.

And then there are the quirks of early keyboards.  Each key cost money, so they only included what was necessary.  You will see there is no key for the number one.  The lower case ‘L’ was deemed sufficient for that.  And with no key for the number one, there is also no key for the exclamation point.  To make one you would type a period then backspace and type a single quote over it.  And forget about your angled, square, or curly braces.  Straight up parenthesis is all you better need.

You do, however, get a special key for the fractions 1/2 and 1/4, while some of the other standard punctuation is scattered about the keyboard in places you might not expect to find them.

The keys work… mostly… save for the ‘N’ key, which sticks.  It used to stick occasionally, now it sticks every time you hit it.  The arm of the key is slightly bent so gets stuck as it strikes and you have to reach up and pull the key back every time you used it.  Nobody will be typing the great American novel on this machine… not very quickly anyway.

Also, there is a little bell that rings when you hit the end of a line so you know when to hit the return lever to start on a new line.  I had forgotten about that aspect of manual typewriters.

The case however has seen better days.  The hinges on the back are broken, so you can no longer carry the case by the handle.  You have to carry it like you were carrying a cake in a box lest the typewriter come loose and fall out.

Now I have to figure out what to do with the unit.  This 80 year old typewriter is a minor bit of family history, but not really an heirloom.  My daughter was interested in it momentarily before going back to her iPhone.  I expect I will find some room for it in my office with the rest of the junk I hang onto.