That, I will admit, was only slightly more effective than buying a yellow pages ad for the whole thing as far as the number of people who might see it goes.  But there it is.  I did get two takers, SynCaine of Hardcore Casual and somebody who I believe is Isey from I HAS PC.  Maybe.

And facing the three of this past weekend was a series of options aging before us on the screen even as we made our choices.

The big new film of the week, Hazlo Como Hombre, didn’t even break into the top five of the choices, possibly because it is Spanish.  And then there was Tulip Fever, not the sort of contagion to set the box office alight.

So the choice of anchors seemed to be Hitman’s Bodyguard, a fine and funny film but entering its third week of box office dominance, and Annabelle: Creation, a horror flick which was has been hanging around at the the top of the list for a week more.

After some hemming and hawing, I decided that squeezing in five screens of Annabelle was better than two or three screens of Hitman as my base.  Then the question was what to fill in the next three screens with.  I ended up with Wind River and two screens of Despicable Me 3.

This turned out to be a reasonable set of picks. 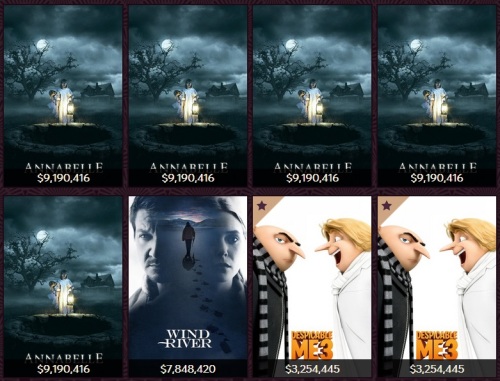 Of course, while those numbers don’t look bad for a four week old release, you have to remember that this was a holiday weekend, so Monday was counted in the totals as well.  That put another $1.5 million on Annabelle’s totals, in what has been described as the slowest Labor Day weekend box office in 20 years.

It wasn’t the perfect pick though.  Perfect was anchored on two screens of Hitman’s Bodyguard and one of Annabelle, with an extra helping of Despicable Me 3, which benefited from $2 million per screen boost that goes to the best price/performer of the week.  Only 7 people out of about 17 thousand got the perfect pick, which earned them $69,602,040. 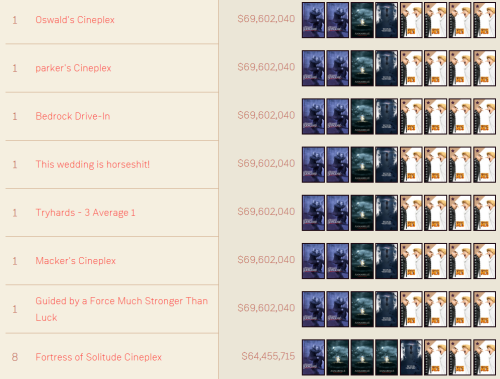 You can also see the second best pick at the end of that list, which was shared amongst five people and yielded $64,455,715.  My picks were the third most lucrative, which put me in a tie for 13th place overall for fall, a position I share with a lot of people.  I think I may have also chosen the most popular pick.

SynCaine went with four screens of Annabelle, but didn’t get DM3 into the mix, while… again, I think it is Isey… eschewed the obvious anchor films and bet heavily on Leap! and Wind River.

The slowness of the week means that the gap between first and last isn’t all that great.  It wasn’t like that time Liore skunked us all on the first week and took a lead never to be broken.  Yeah, nobody is going to let that go any time soon.

And speaking of Liore, apparently my 13th place overall finish in week one was enough to attract the attention of her hardcore movie fan league.  I was invited to join their ranks based on my performance on the worst movie weekend of the year.

I accepted and was immediately dismayed to discover that my first week score didn’t count for their league as I joined after the second week started.  That left me with a score of zero in a group that did fairly well for the week.  However, I am told that Ben asked the FML team to include my first week score in their league.  (Thanks Ben!)  Now I am king for the week with a slim lead of about $3.6 million.  We shall see how I fare in more expert company.  I’m not sure I should list out the rankings for that league though.  Not everybody appreciates publicity.  But there I am.

Which brings us to the the second week of the season, where the choices are:

In the words of Bart Simpson, there are a lot of low cards in that hand.  Also, Wonder Woman has finally dropped off the list… thanks a lot Stephen King… after a 14 week run.

Basically, there is the release of another Stephen King movie and a Reese Witherspoon romantic comedy.  My hot take is to bet on Reese.

It is clearly expected to dominate the box office, so much so that it is the first film since Spider-Man to be split into three different days just to make the picks more interesting.  It est omnis divisa in partes tres and all that.

But I am just not feeling it for It.  Then again, I haven’t been much into horror movies since the 80s, so the whole “Make Clowns Evil Again” vibe doesn’t really thrill me.  Also, being just a pronoun means I keep losing the title in my typing. Where is it? Is this it, or is it this?

Then again, the reviews for It are good… better than Dark Tower… while the reviews for Home Again are not looking good, falling south of even Hitman’s Bodyguard.  But in a week when It is the only other new thing at the cineplex, will people opt for Reese just to see Reese?  I mean, I would.  Plus Reese is cheap this week.  I can have Reese on six screens, and nothing speaks to me like cheap Reese on six screens.  I may need a cold shower.

Anyway, I am going to have to mull this over, play with my spreadsheet, and maybe wait to see what Variety says.  This is what happens when I start paying attention to the box office, suddenly the movie section at Variety is in my RSS feed.

You can still join my league by finding the links in the posts indicated up at the top.  I’d link it here, but I figure if you really want in you can prove it by expending a little effort.  You can compete on a weekly basis or, if you’re hot shit, you can try to take me down from my current spot in first place.  My leaning towards Home Again might be an opportunity.

Last month I asked if Raptr was dead.  Now it seems that I asked the question close to the point where there would be no doubt.

I peeked over at the site today and found a notification on the main page with a link to a press release.

The press release announced the end of the service.

Today we are announcing that we will be shutting down Raptr on September 30, 2017.  The world is different today than when we first launched Raptr.  Microsoft, Nvidia, and AMD all have their own game optimization tools now and they do a fine job.  So it’s time for us to get out of the way.

We are sad to say goodbye to Raptr. Many of you have invested a lot of time on Raptr so if you’d like to export your tracked gameplay data, follow the instructions below:

If you have any other questions, please send us feedback.

We are proud of the service we built and the community who helped grow Raptr to be used by millions of gamers worldwide.  Thank you for your support for the past 10 years.

It is nice that you can get a JSON file with your play time records in it.  Not sure what I will do with that, but I can sock it away in a directory to rediscover some day.

Here at the end of the service, my final top five games ranked by play time tracked are:

And so it goes.  You can look at the site for the remainder of the month.  After that it is likely to be some sort of link ad site and all that will be left is a Wikipedia entry and whatever the Internet Archive saved off.  Gamer social networks are not a viable business.

Addendum: Raptr sent out an email update about its shut down which was pretty much identical to the quote above, but which also included this tidbit:

Note: If you are a Plays.tv user, we want you to know Plays.tv launched as an independent company in January 2017 and is not affected by Raptr’s shutting down.

So I guess we know what Thresh is up to; trying to make Plays.tv a thing.