Word came down as we sat on the former Circle of Two Keepstar in 68FT-6 that it would be changing owners again.  A deal had been negotiated wherein TEST would be buying the citadel from us.  Soon Middle Management Dino was floating between the uprights of the Keepstar.

It had been reported previously that The Judge had received 300 billion ISK to transfer the Keepstar to GSF, and the rumor going about was that TEST bought it yesterday for 400 billion ISK.  Despite the markup that is still a pretty good price for a fully fitted, lightly used (never been besieged!) Keepstar.  Look the price at which zKillboard valued a recent Keepstar kill.

The name remains the same for now.

Meanwhile, some diligent camper brought in some more small bubbles and rebuilt the “LOL” in space above the citadel.

Somebody on coms said that the shaft of the dong also had to be recreated as it had also been built out of tech I warp disruption bubbles, which only last for 48 hours.  (Bubble decay came in with the YC119.3 update.  Before then they lasted until somebody shot them.)

Selling the Keepstar at least answers my question about what we were planning to do with it.  We weren’t going to keep it here in Impass, which will soon be hostile to us again, and packing it up to ship it back to Delve invites a gank attempt.  Now what to do with it is TEST’s problem.

And speaking of problems, the camp itself is becoming a bit of one.  As time goes on more and more of the CO2 groups are leaving that alliance and joining one of the others that we are temp blue with.  So in addition to the people moving into Impass, some of which are temp blue and some of which are not, we have corps in transition, having left CO2 but in the cool down before they can join TEST or Brave or whoever.  So there were many moments where there seemed to be a target… like when a Capital Fusion Naglfar undocked… only to find they were tethered because they were pledged to TEST but not yet in the alliance.

The dismantling of CO2 continues, with many pilots and most systems gone now. 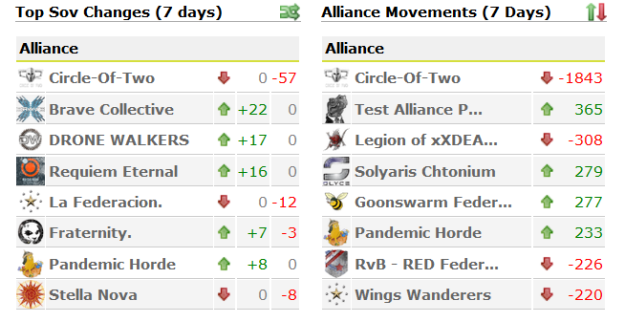 CO2 membership is still in motion, but the sovereignty has been divided up by members of the Legacy Coalition, which Impass being shared by Brave, Drone Walkers, and Requiem Eternal. 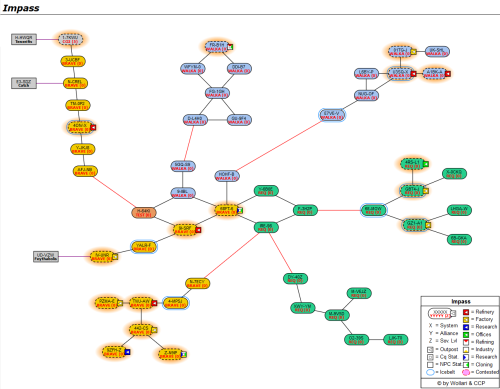 TEST also has a system in the region, though it is not 68FT-6, which makes me wonder what they are going to do with the Keepstar once things settle down.

Meanwhile, the camp of the Keepstar seems set to wind down.  Fewer and fewer attempts to escape are being made and we’re occasionally having to pay people who we shouldn’t shoot.  The number of CO2 pilots hanging out in the Keepstar is dwindling.  Then there is the fire sale market, which has been pretty much picked over.  The good deals are gone.  There are a few things I might buy if we lived here.  But having to haul stuff back to Delve or to Jita is a non-starter.

I suspect that we will pack up and head home before the weekend is out.  Then the temporary cease fire will run out and Impass will go back to being hostile territory and somebody else’s problem.

Meanwhile Triumvirate, CO2’s ally in the war, looks to be in an uncomfortable situation.  Still, they managed to blow up an FCON Fortizar and a Nyx while people were focused on Impass and 68FT-6.

The camp out in 68FT-6, tiny in the scope of the universe

And the story of null sec grinds slowly on.

Addendum: The camp is over.  TEST head Progodlegend has declared that CO2 corps are welcome in TEST, (save for those evil advisors in Balkan Mafia who steered GigX into all of this) so they can’t very well let us keep shooting them (or join in on that).  Progodlegend declared his disgust with The Jude in his statement, though just the other day he was saying on Reddit “You made the right call Judge.”

Anyway, CO2 members have a clear out now and we’re all headed home after a few days of camping.