And so it goes this year, with today being the launch date for Chaos Descending, the fifteenth full expansion for EQII, and that doesn’t include the various adventure packs that SOE and Daybreak have tried now and again.

While I wrote a bit about the expansion before, along with the various purchasing options, the bullet point summary from Daybreak is:

That is a pretty nice chunk of new content being delivered, and on par with what the combined EverQuest & EverQuest II team delivers annually.  There is none of this “every other year” talk for expansions, and they still deliver a sizable mid-year update along the way as well.  They might be the hardest working team in the genre.

In addition, EverQuest II just celebrated its 14th anniversary last week.  The official launch date was November 9, 2004, with the Europeans getting their launch two days later, on the 11th.  And the anniversary brings out the Hero’s Festival for players in Qeynos and Freeport.

No Firiona Vie on EQII boxes

While the game launched on November 9th, my own anniversary with the game actually falls on November 13th.  That is when SOE, no doubt expecting the same rush for servers that they experienced with the EverQuest launch back in 1999, rolled out their second wave of servers for US players.  So on that date the Crushbone server went up and and what ended up being our guild, a mix of players from EverQuest and TorilMUD, started making plans for how we were going to attack post-cataclysm Norrath.  We were the Knights of the Cataclysm.

And so began a year of playing… and fighting with… the new game as both we and the in-game systems evolved.

It was a strange time.  I have fond memories of it, though I am sure I have blocked out many of the problems and irritations that plagued the game back at launch.

Well, I can certainly recall some of them.  I could go on about crafting, no off-line selling at the broker, locked encounters, dupe bugs, experience debt, five minute buffs, the tiny quest log, having only four character slots, guild leveling, mounts, the experiments with risky boat travel, and that graphical processing bug in Qeynos Harbor that made you machine slow to a crawl as you came and went from using the bell positioned out at the end of the dock.

So yeah, if I remember all of those right off the top of my head then there were probably a lot more I’ve forgotten.

But it was still exciting and new and probably all the more so since I had stopped playing EverQuest actively a couple years before, only popping in to visit now and again, so there was very much a new to MMOs again aspect to it.  And having Meclin along, who had skipped EQ so was really in his first MMO experience made it a pretty special time. 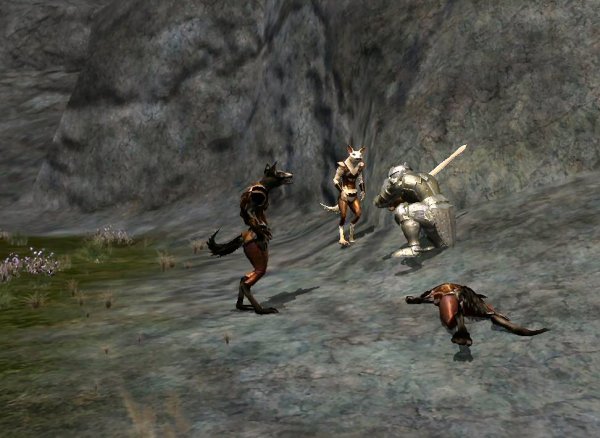 And the game looked good.  Well, it looked better than EverQuest in any case, if you could run it with the graphics settings turned up enough to appreciate it.  I recall tales of people coming for EverQuest and finding the system requirements for the new game so onerous that they had to turn down the settings to the point that they couldn’t see the faces on character models.

I think this was called “future proofing” or some such, but it seems to sacrifice the necessary today in favor of a theoretical tomorrow.

Fortunately I had a decent rig… a big purple Alienware box with an okay nVidia card in it… so I could appreciate some of the graphical quality of the game.  I couldn’t go full settings, but enough to get a decent screen shot. 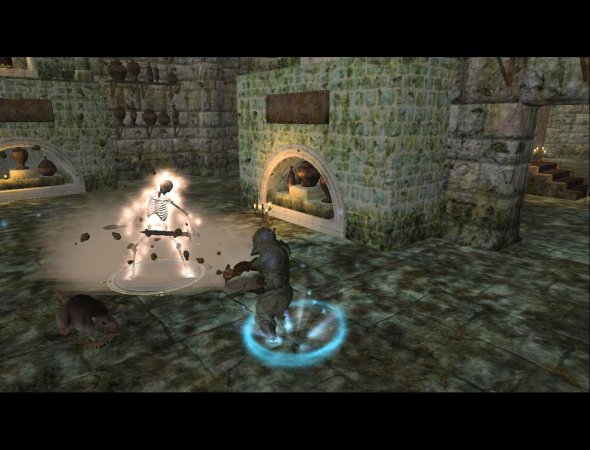 The catacombs under Qeynos back in the day…

It was also an awkward time for video cards, with the horrible, power hungry nVidia 6800 GT series ruling the roost and burning out motherboards and power supplies in the name of graphical fidelity.  The 6800 design stayed around for ages, being continuously improved as time went along.  I never went for the initial mode due to its horrible reputation, but had a couple of the follow-on 8800 GT boards (LOTRO burned out two of those), then a GTS 250 and a GTS 450, both of which had their roots in the old 6800.  At the time though I stayed with the more reliable 6600 GT and then an ATi 800XL.

It is amazing the amount of little details that lurk in my brain and yet I still can’t remember somebody’s name ten seconds after they’ve been introduced to me.  And I’d have to check the settings to tell you which video card I have installed now.

So it is something of a triple, the 15th expansion drops, the game celebrating its 14th year, and I celebrating my 14th anniversary of joining the game.  Though, if I look at my character, it actually puts me in line for the 15th anniversary present in another ten days.  I wonder what we’ll get.

Of course, the timing is all off as well.  Last month I was playing and writing about EverQuest II.  Now LOTRO has captured my fickle heart with its Legendary server.  Still, I might have a post or two left in me this year about Norrath.