I meant to mention this last week, but the war in EVE Online has gotten in the way with posts about the game taking up 10 of the last 14 posts.  My efforts to note events as they happened there led to me missing things elsewhere, such as the unlock of the Echoes of Faydwer expansion on Stormhold, the nostalgia focused EverQuest II time locked expansion server.

We are down to just one server now however

Why am I so keen to bring this up?  While I have been noodling around on the Stormhold server some over the last month or so, as a game it has been a distant third behind EVE Online and Minecraft. (I have about five Minecraft posts I want to do. Aaron won’t stop building cool new stuff.)

Part of it is that, with Echoes of Faydwer, we are now straying into the realm of things that occurred during the life of the blog.  EoF came out on November 14, 2006 and I can look back and find posts about that, including one announcing the day another about me trying to find a copy of it (back when CompUSA was still a thing), and then one about the patch process.

Nostalgia within written memory, something I do not have for the launch of EverQuest back in 1999 or even the launch of EverQuest II in 2004.  So I am happy in that regard for a start. (Though I was still figuring out how to deal with images on the blog and was hosting them on ImageShack for a bit. Those images are all gone now, since they don’t host for free any more. But I probably have them squirreled away in a directory somewhere.  Also, in a sign of who SOE used to report to, the install for the expansion put a Sony Pictures trailer on your desktop.)

Beyond that however, in the EverQuest II community the Echoes of Faydwer expansion represented a considerable change in how SOE viewed the game. 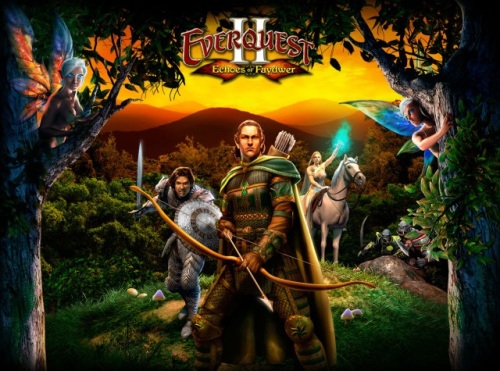 It is no secret that EverQuest II got off to a rocky start for many and varied reasons.  SOE seemed to have come away from the king-before-WoW that was EverQuest with a series of notions, some rather odd, as to what they had to do to make its successor better, a few of which I summed up in the back half of another post from a while back.

But of those notions, the most Bizarro world seemed to be the idea that they should avoid the EverQuest lore as much as possible.  We were still on the world of Norrath.  The cities of Qeynos and Freeport still existed.  Orcs and gnolls abounded.  Broken wizard spires lay in a few key spots.  And we had the heritage quests.  But all of that was treated as more trivia or coincidence than important parts of the world.  After the shattering everything was different.  And the first two expansions, Desert of Flames and Kingdom of Sky, sought to blaze new lore trails away from even the bits and pieces of EverQuest we could find.

Yes, there were many other problems, like simply being able to walk through Qeynos harbor without lagging to death.  But the neglect and abandonment of the lore worked against EverQuest II.  Not only was never as popular as its predecessor at its peak, there was speculation that, with people abandoning the game after launch, it wasn’t just behind WoW in subscription numbers, but EverQuest as well.  You couldn’t find a lot of EverQuest in EverQuest II.

The Echoes of Faydwer expansion came along to change all of that.  The expansion would return to the continent of Faydwer.  The zones would have the same names we knew of old.  Locations like the chessboard would be featured.  Even the geography would feel similar, with the valleys and winding paths.

And there would be a new home town, Kelethin that, like the town of old, would be in the trees.  And it wouldn’t be chopped up into half a dozen instance, but actually exist in an active zone, the way that old Kelethin did back in EverQuest.  Old names would resurface, like Crushbone Keep, re-imagined but still with the same character.  Other places, like the old starting towns of Kaladim and Ak-Anon would be there, but taken over by creatures and turned into places of dread.

And you would have to take a boat to get there, eschewing the travel bells and other teleportation schemes that EverQuest II had embraced for its first two years.

At the time it was seen as something of a rebirth for the game.  The expansion also gave players a new route from character creation to level cap.  We also got cloaks, the return of deities, adornments, and… the Fae.

The expansion also represented a change to an every November expansion pace, something SOE and Daybreak have managed to keep to, and the inclusion of past expansions as a roll-up included with the purchase of Echoes of Faydwer.  This is how I ended up with Kingdom of Sky, having never purchased it stand alone.

So kind of a big deal, in an SOE-centric way, given the changes the expansion ushered it.  A lot of people came back to see this new vision of places from the original EverQuest.  Granted, the place feels pretty dated today.  Butcherblock is still very good, and I don’t mind the Steamfont Mountains, but any charm Greater and Lesser Faydark had for me back then has worn off completely.

Thus I felt I had to mark the transition, the time when the nostalgia focused Stormhold server hit the point when the game itself first decided to grasp the nostalgia theme for itself.

As for the Stormhold server, in light of this nostalgia bloom I am building up here, I will see if I can’t find some time to go explore there this weekend.  My Stormhold character is in the zone for Butcherblock, so he can get on the boat and set sail.