The first presentation on Saturday of EVE Vegas was from CCP Lebowski.  Titled “FLEX, Decs, & What Comes Next,” it covered a stretch of topics, but opened with the latest round of structures from the Upwell Consortium.  You can watch it here.

FLEX structures are set to replace the last few null sec infrastructure roles that still require Player Owned Starbases.  After that the noble POS and the horrible code base that supports it, long complained about by CCP, can be retired.  Maybe.  A POS is still a pretty hand structure, so they may still need something to replace the simple ability to drop a safe spot in hostile space.

Anyway, the new FLEX structures are coming, FLEX standing for “Fast Logistical EXpansion,” and they share some characteristics. 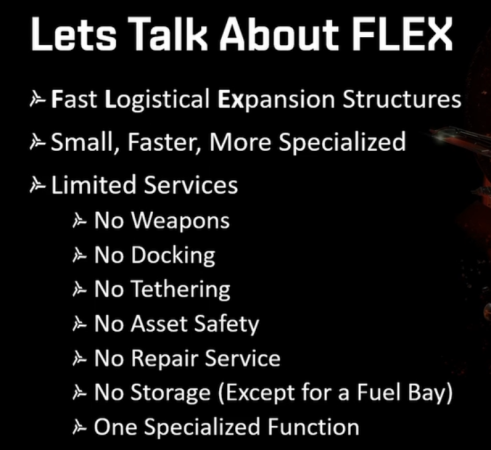 The Basics of FLEX Structures

There are three FLEX structures coming, each replacing a POS function.  There is the Pharolux Cyno Beacon, on which many an unwary capital pilot will probably die, the Tenebrex Cyno Jammer, which will let you stop capital drops in your territory, and the Ansiblex Jump Gate, which is going to open a can of worms we’ve seen before.

And it is that last one, the Ansiblex Jump Gate, that I want to bring up here, because it has some interesting features.

There are some very spiffy aspects of this new structure.  The model looks good, they align in space to the star system they to which they are connected, and the animations for it are superb. The latter will also be used with the upgraded art and animations for jump gates throughout New Eden.

But the thing I want to highlight is how unlike the old jump bridge the Ansiblex really is.  It is the last two bullet points that are key here:

My first thought on seeing those two items was that these were, in essence, player made star gates, something that had been mentioned as a possibility quite some time back.  I was kind of hoping that such structures would send us into new space, maybe with some new rules, but these seem to fit the bill if you get right down to it.  Promise delivered on, if not in the way expected.

My second thought, which came very close on the first, and which I heard echoed by Dirk MacGirk amongst others, was, “Here is the return of the Eye of Terror!”

The Eye of Terror!

The Eye of Terror was a jump bridge network setup during the Great War.  While I was playing EVE Online at the time, I was nowhere near null sec.  It is, however, an item of legend, so I went to the Goon Wiki to get a description:

The original Eye of Terror was a series of jump bridges finished in December of 2007 during The Great EVE War. It ran from 46DP in Tenerifis to P8- in Feythabolis, enabling a constant stream of Goons into RISE’s living room for 24/7 harassment.

Since late August, RISE had been increasingly penned in to the “RIT Triangle,” their cluster of home station systems past the P8- choke point, and the constant presence of Black Ops and Pandemic Legion kept their station systems disabled and left them with no means of escape.

By the time the Eye of Terror actually opened RISE resistance had already been reduced to sitting in stations with the odd, terribly fit ship to attempt to escape. The stream of ships through the Eye rapidly destroyed their towers, many of which ran out of fuel as RISE logistics had given up or were trapped in stations.

That was the first Eye of Terror, and legend has it that its construction and effectiveness led to CCP changing the rules for jump bridges, restricting them to one per system so that fleet would at least have to expose themselves to gates along the way rather than just warping from POS to POS and jumping in relative safety.

Then there was the second Eye of Terror, the jump bridge line that I took so often back in the day, the one that first led to the beachhead in Cloud Ring for the invasion of Fountain.  Later it was extended, first through Fountain, then Delve, and then into Querious.

If a fight was happening in way down south we could just hop in our ships up in Deklein and be down there in a pretty short time.  And so battles like HED-GP came along and crashed the server.  Yes, there were other factors, like the proliferation of drones and the Slowcats doctrine that were not helping.  But the fact that people could log in anywhere in null sec and get to an escalating fight… all the easier because time dilation slowed the fight down while those traveling were moving at full speed… led to a pile on after pile on.

So CCP changed the way travel worked in null sec.  The Phoebe update came along and introduced jump fatigue.  Capital ships could no longer make jumps in rapid succession, and the same applied to jump bridges.  Then we got Fozzie Sov, which sought to disperse battles over sovereignty.  Small fights were going to break up the stagnation of null sec.

Certainly, some groups responded by consolidating their holdings.  The Imperium drew back into a much smaller footprint in the north though, in the end, that was still more than could be held by the coalition.  The Casino War proved that well enough.  There was that and other shake outs, but in the end there was still something of an equilibrium.  Outsiders and pundits still speak of the “blue donut” as though repeating it makes it so.

And then… something happened at CCP.  I think they decided big fights were in their best interest.  But the jump fatigue penalties started getting pared back.  At the start, with Phoebe, you could make a character useless for months by taking too many jumps.  That got reduced to five days.  Now it is down to five hours.  But it still injects a wait period between jumps.  You can’t just jump or take jump bridges in rapid succession.

Only soon you will be able to again, and I am at a loss to explain why.  Travel is a factor you must plan for in New Eden.  Jump fatigue seemed to have a purpose in that.  Now that whole “3 minutes per light year” travel time metric goal of just four years ago will be straight out the window.

When the new FLEX structures go in, when the Ansiblex Jump Gate becomes a thing, travel in null sec will lose its burden again.  Subcap fleets will be able to cross large distances at will, giving coalitions the power to hold onto more territory.  And it won’t just be subcaps, because capitals, supercaps, and titans will be able to take those new jump gates as well.

Yes, CCP points out that it will cost in liquid ozone.  But I suspect they underestimate the abilities of GSOL, the miracle working logistical arm of the Imperium.  I bet if The Mittani told them that there was a need to move every titan in the coalition in the next 24 hours, they would have supplies laid in and ships ready to refuel jump bridges along the whole route.  I think we’ve already demonstrated that cost and effort are not really barriers.

So there we’ll be soon enough.  But the gate animations will be cool.  I’m tempted get FRAPS setup again to take videos of giant fleets passing through these new structures as the third Eye of Terror takes shape.