SuperData Research is out with their January digital sales chart, so it is time to take a look at that. 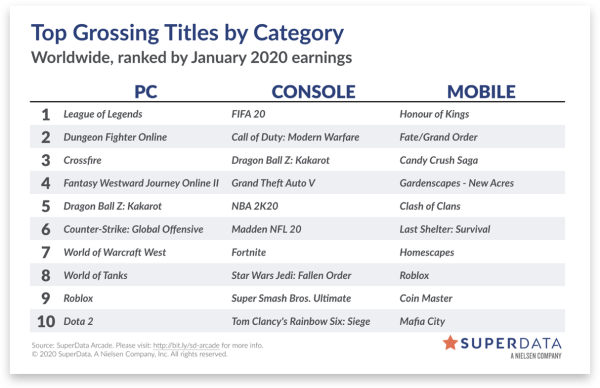 As usual, on the PC end of the chart the top four on the list remained the same.  There was a bit of a shake up as Dungeon Fighter Online and Crossfire swapped spots, but otherwise it is the same four titles.

In fifth position a new title appeared, Dragon Ball Z: Kakarot, which launched mid-January and jumped onto both the PC and console lists.

CS:GO bounced up into sixth place from its ninth slot position in December.

And in seventh place we find World of Warcraft West.  That is one position higher than December, but we don’t know if that is really meaningful as the rankings do not include any values with them.  However, there was some supplemental information as part of the report from SuperData:

This is a turn around from the news we got with the August charts:

This has led to people to interpret what is going on in a lot of way.  The most egregious hot take seems to be that J. Allen Brack was right, nobody wants WoW Classic, and it was a mistake to do it.

Unfortunately, looking in from the outside, it is hard to know what really happened or where the subs went or even what factors have been in play.  A lot of things have happened since WoW Classic launched in August, including the Blitzchung debacle, BlizzCon, and the release of the honor system in WoW Classic, which I am pretty sure killed off a lot of activity on the PvP server.

Like literally every MMO retro server plan executed before it, WoW Classic was always going to drop off after a big surge.  And given how WoW Classic was almost all Blizzard could talk about during the Q4 earnings call earlier this month, it still seems like it was a worthwhile project to somebody.  We won’t ever know what the numbers would have looked like without it.

But will it have been enough, or will the post-launch drop off let the faction within Blizzard who didn’t want WoW Classic shelve any further development down that path.  After all, they also have the Warcraft III Reforged launch as ammo to argue that nostalgia isn’t all that big of a deal.  We shall see. (Though, given the subscription dive, I suspect that WC3R might have been pushed into a premature launch in order recognize revenue on the year-old pre-orders Blizz was sitting on just to make their internal numbers/goals for January.)

It will be interesting to see what Blizzard talks about on the Q1 2020 earnings call come April.

The rest of the PC list saw World of Tanks holding on to its spot, with Roblox and DOTA 2 bringing up the final two spots.

On the Console list FIFA 20 and Call of Duty swapped spots at the top, with Dragon Ball Z: Karkarot jumping up to third there.  The perennial list member Grand Theft Auto V held on to fourth position for another month while Fortnite, which has disappeared from the PC ranks, held on to seventh spot.  But, as we have seen in the SuperData annual reports, the console pie is smaller overall.  It is a smaller pond in which Fortnite remains a big fish.

On the Mobile end of the chart, the Chinese behemoth Honour of Kings returned to the top spot, as Clash of Clans, last months chart topper, fell back to fourth.  Candy Crush Saga grabbed third place, while Pokemon Go dropped off the list completely for January.  We will have to see if the new battle mode and events revive its fortunes on the February chart.

Now is the point when we compare the SuperData chart with the January numbers from NPD.  As always, NPD is US only, combines PC and console sales, and doesn’t always include digital sales.

As I have said before, console titles are much more heavily weighted on this list, as they still depend far more on the retail channel, which SuperData does not include.

With that, Dragon Ball Z: Karkarot tops the list, the hot new property on both PC and consoles.  Compared to the SuperData chart, FIFA 20 doesn’t make the cut, but its market isn’t in the US.  And, as often happens, we see a couple more titles for the Nintendo Switch, which seems to rely more heavily on retail than other consoles.  You cannot buy Ring Fit Adventure on digital in any case, as it includes a controller.

And so it goes for another month.  Below are the additional notes from the SuperData Research report: