Another item that came up while I was gone for a week was that the Ranger Regiment alliance had joined the Imperium.

Ranger Regiment is one of what I think of as the Chinese diaspora groups that left the Serenity server in China after the Pan-Intergalactic Business Community essentially won EVE Online on that server, which drove people away. (Rooks & Kings did a video about the end of days on Serenity that is worth watching.)  So they and some other groups including Fraternity, The Army of Mango Alliance, and P.L.A came to the Tranquility server in order to play in a sandbox where one group didn’t own all the sand.

The rather brief post about Ranger Regiment making the move to the Imperium did not go very far into why they might have sought to join.  Not that I think there is much mystery as to why they were inclined to join.  The war in the north started with TEST attack Dead Coalition allegedly over something Sort Dragon, CSM member and head of the latter, said to which Vily, also a CSM member and military chief of the former, took grave offense or something.  Wars in New Eden have started over less.

But Ranger Regiment has born the brunt of the attack.  Looking at their changes page on DOTLAN, the last month has seen them lose much of their holdings in Branch and Tenal, the once safe ratting and mining grounds of Dead Coalition.  The null sec influence maps paint the picture more graphically. 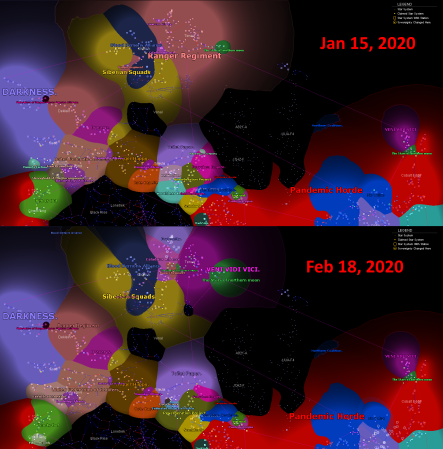 A big block of those losses came after the announcement, so could be perhaps attributed to them packing up and leaving, but they have still been under pressure for more than a month and had been losing systems steadily over that time.  They still hold some systems in Branch and a chunk of Deklein, though I imagine they will let those go to somebody unless the Imperium wants to expand the arc of its holdings past the outpost systems in Cloud Ring and Fade that are at the far end of the Eye of Terror jump gate system.

I am not sure that we want to have to cover that much territory, and I am sure that wouldn’t make Sort Dragon particularly happy.  We’re allied for the moment, but it is a casual agreement that can change with the situation.  We shall see.

This also marks the first time in a while where an alliance size group has applied to join the Imperium.  There have been some other temporary alliances and agreements when we have worked with other groups, but most of my posts about the state of the coalition membership are from the Casino War era when come alliances were keen to exit.

If you look at the recent null sec influence maps, we are in an era where some areas between the coalitions have opened up to smaller, independent groups.  But there are still four key coalitions in null sec right now; Darkness and Dead Coalition in the north, Pandemic Horde and PanFam in the northeast, TEST and Legacy Coalition in the southeast, and Goonswarm and the Imperium in the west.  They have realigned to grind against each other multiple times now, which has caused them to consolidate and reorganize at points.  I suppose the question at the moment is whether or not Dead Coalition, which just lost an alliance, can hold up under the current onslaught.  The Imperium deployed a SIG to come help, but did not call the whole coalition out nor bring any super capitals north, so our commitment to their defense is less than all we could do.

Meanwhile, Dead Coalition is the one group that does not have an obvious and well known new player group that can funnel fresh recruits into the coalition.  They are already more of a regional power than the other three, and if they cannot bulk up they may end up as another small buffer state between them.