It was a busy weekend and we could not get the whole instance group together, but on Sunday afternoon three of us, Ula, Skronk, and myself, found a bit of time to log into WoW.

We got out the group I posted about previously to pick up where we left off in Northrend.  We had made it out to the airfield in Borean Tundra and carried on with a couple of quests there as a warm up, enjoying the luxury of features offered by the current version of the game after doing quests together the previous week in WoW Classic.  You can just mouse over the quest in the quest tracker and it shows you everyone’s objective/collection status.

With three of us though, questing was a bit of a walk over.  So we decided to take a shot at one of the challenges we discussed when we started this venture.  We were going to try running an instance.  Our ability, so far, to run all of the WoW Classic instances with a group of four made us wonder if we could handle any of the Wrath of the Lich King instances with a group of three.

Retail WoW is easy-mode, right?  But how easy?

Our group at the moment was:

We at least had healing covered, as Menula spec’d into that.  We didn’t really have a tank, there not really being a shaman tanking spec.  And, while Merchi was beast mastery, the only REAL hunter spec to my mind, he did not have a pet that was the tanking spec.  His robo-bunny from the tutorial was the cunning  pet spec, which has some damage mitigation, but a tenacity spec pet would have likely been better.

Still, what the hell.  So we headed towards Howling Fjord and the traditional first dungeon from WotLK, Utgarde Keep.  I’m not sure we HAD to go with that instance.  Keeping track of what unlocks when as you zip up levels is more than I can manage.  But we knew where it was and they give you the flight path up front now. 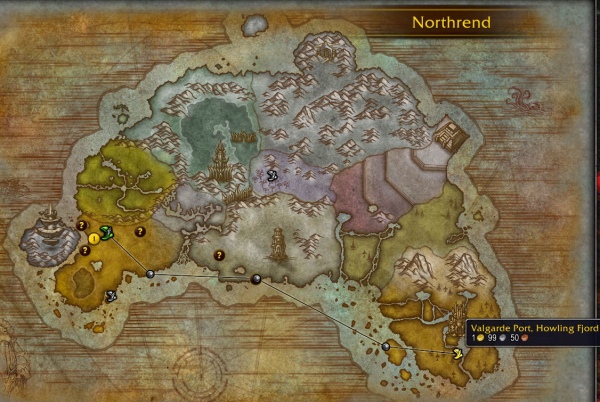 So it was on the… well, not a bird, but a gnomish flying machine… and off to the far side of Northrend.

They don’t call it the “boring” tundra for nothing

Over in Howling Fjord I was reminded just how close to the flight point and the inn that first dungeon really is.  It looms over Valgarde Point, the sinister skull in its facade looking out over the area. 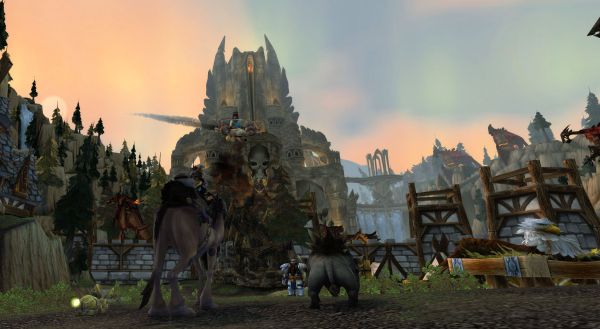 Mendula coming in for a landing

From there it was a quick ride north, dodging the field of mobs before the structure, to the instance portal.  Once inside we were able to pick up the quests from the quest giver inside the instance… by WotLK there wasn’t all the running around for dungeon quests the way we have been dealing with in WoW Classic… after which we were left eyeing the first set of mobs.

The plan was to use my pets to tank… I chose the “two pets out” from the talents, which seemed far and away the best idea… and Mendula would heal while Fergorin and I piled on whichever mob was the target.

After getting a handle on the various mobs wandering around ahead of us, we managed to pull a pair… and it wasn’t a disaster.  Sure, Mendula went down… healing drew aggro… but Fergorin could ress, so we were able to get ourselves back together. 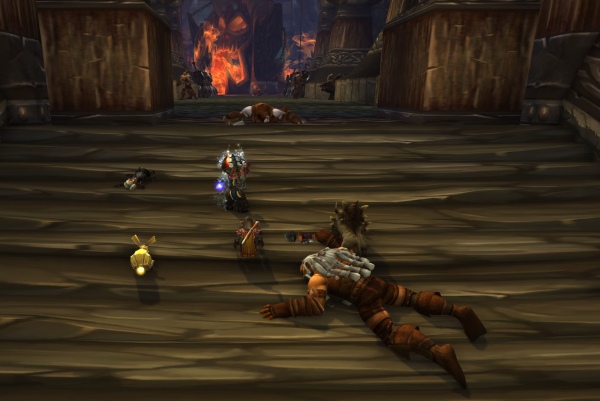 Mendula and our two targets down

Once she was ressed, we carried on, learning a bit with each fight.  All of us died a couple of times before we started to get the hang of it.  By the timer we got out onto the furnace floor, I had figured out my traps, one of which made a pretty effective crowd control. 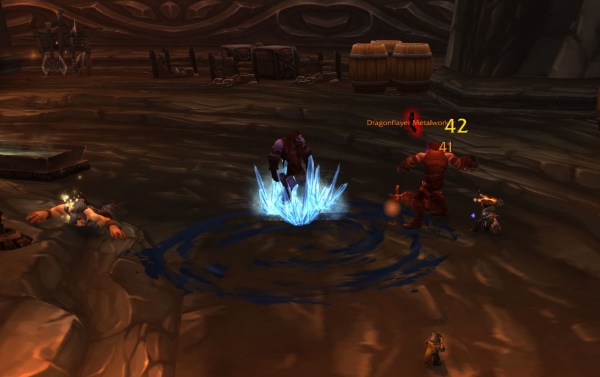 One mob ice trapped, with the tar trap slowing the others down

Like so much in retail vs classic, hunter traps are a lot different.  I found that I could not only throw them in combat, but I could even throw the freezing trap under a mob in a group that we had yet to aggro and trap it without pulling the group.  Strange times.

We were starting to make headway and it felt like we were doing okay, and then we made our way into the dragon room. 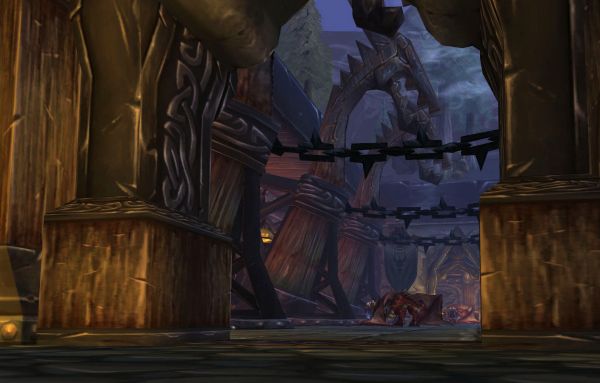 Something in the back of my head said that the dragons were tougher than normal elite mobs in the instance.  I seemed to recall they had double the xp rewarded, which was commensurate with their increased difficulty.  Also, I remembered that we didn’t have to clear the whole room, just one side, in order to make our way to the next area.

I found out quickly that my freezing trap wasn’t good on dragons and deaths occurred.  Fortunately Fergorin has a self-ress spell… also, because we wiped more than once in the room, it is nice that when you release you come back in the instance.  Again, WoW Classic had us expecting to run back from the local outside graveyard. 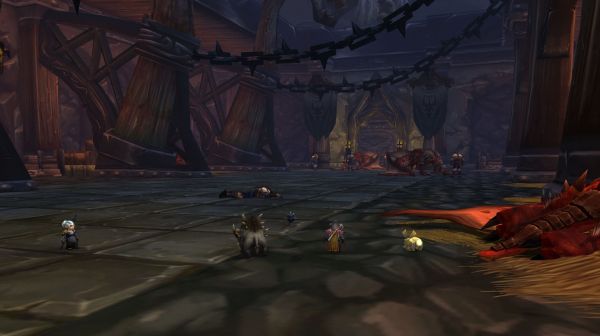 We managed to make it through the dragon room on a few tries, then pressed on into the next hallway, where we faced a group of four normal elites.  That we were able to handle.

From there it was into the next big room, Reavers Hall, which is where Prince Keleseth resides. 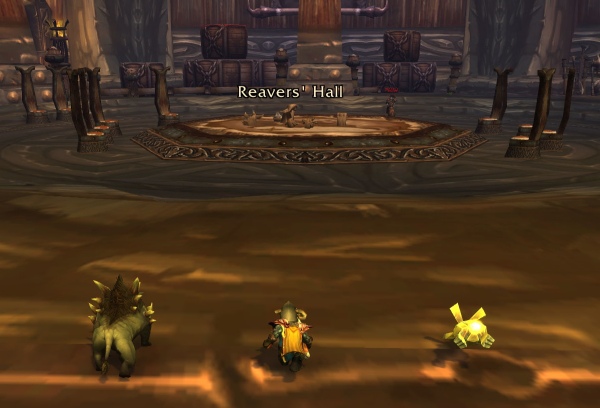 The big room with the map table

The four mobs at the table, who come as  a group, got a bit out of hand, but we managed to take them down.  That left Prince Keleseth, the first boss in the instance, as our next target.

We actually spent a week off reading up about our classes over at the then font of such knowledge, Elitist Jerks, upgraded our gear (I think I still had the Carrot on a Stick trinket equipped), and generally worked to “git gud” before we gave it another try.

And, after no small effort and a few more runs, we got past him.  And, from that point forward in the group, instances became more a matter of learning the boss fight mechanics than simply trying to apply enough DPS.  Our ability to run through most of the WoW Classic instances as a group of four, many of which were a struggle as a group of five back in the day, is directly related to lessons learned back then.

Which also leads to us having the spunk to think we might be able to take on an instance in pre-Shadowlands WoW with a cobbled together group of three players.

Prince Keleseth, however, had other plans.

We sort of remembered bits of the fight.  I recalled that he would summon helpers during the fight from the door on the far side.  I thought I might put my tar trap down there to slow them down a bit.  Other than that we couldn’t recall much.  So we gave it a try.

We wiped, naturally.  We had forgotten about his ice block attack, where one of the party members is encased in a block of ice, unable to do anything, while it applies a bunch of damage.  You have to get everybody to attack the block and burn it down before it kills the person encased in it.

Also, as we remembered, Prince Keleseth summons friends, a set of undead, to come help him.  You need some AOE to knock them down fast.  And there were some line of sight problems with the big table and the short people standing around it.

We got ourselves together and tried to refine our approach.  We pulled Prince Keleseth back to the door in order to give ourselves a bit more time versus the adds, but we were not quite ready to deal with them, or the ice block. 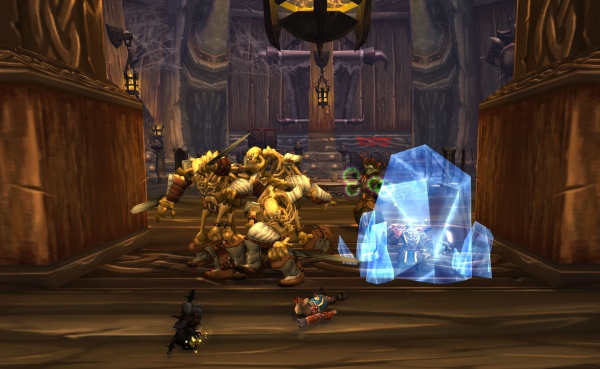 I’m dead, Fergorin is in the ice block, Mendula is all the DPS

We had been at it for a while by then and it was getting to be time for dinner at my end, so we called it for the time being.   We might not have a very good class mix, I might need a better pet, we might not even have critical skills at our level, or it might not  be a viable instance to go in with just three people.  Some more research to be done.  But it was a bit of fun to go in and try, and we even got the first quest done for the instance, got a few drops, and gained a level.

1 thought on “A Visit with Prince Keleseth”