After last week’s preparation, we were ready to finally get in there and finish off all we needed in Sunken Temple.

We did have to spend a little more time making sure that everybody had their class quest up to date.  But as we logged on, our group was as follows:

Bigbutt needed to head out to Aszarah to get himself ready, so he and Azawak flew off while the rest of us occupied ourselves with heading out to Stonard and harvesting.

When Bigbutt was finally primed to go, Earl and Hurmoo were standing around the summoning stone at Sunken Temple ready to bring people in.  Then it was suggested we not bother and just use the dungeon finder.

And then we realized that, if we used the random dungeon feature, we had a 1 in 3 chance of getting Sunken Temple as our destination, which would give us a bit of extra cash and a goody bag with a blue item.

The locks next to some of the dungeons meant that at least one person in the group was not eligible to go there.

And if we didn’t get Sunken Temple, we could back out and still have Earl and Hurmoo summon everybody so we wouldn’t have to wait out the timer.  So Azawak set the wayback machine for “random” and hit the button.  We all waited for the loading screen.

And we got it!  That put us back in Sunken Temple for our final act there.

Once More Into The Temple

Once in, it was naturally back to the same things we had done two week previously.  We had to make the circuit to kill the mini-bosses.  We headed to the bottom of the temple so it could show us the pattern of the idols.  We had to activate the idols in the right order.

And there were dragons and dragon kin to be slain. 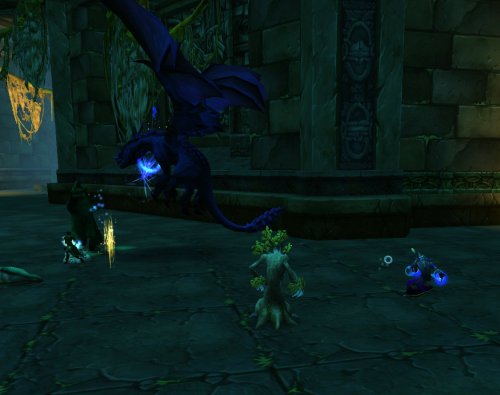 And that lead us all the way around to Eranikus, which is the end point of the exercise as far as the dungeon finder is concerned.

That got us our goody bag and such.  However, to finish off the last of our quests, we had one more event to take care of.  We had to defeat the minions of the god Hakkar.  That took us another 10 minutes.

And that completed Sunken Temple for us.  We had to make a pass around Azeroth to turn in the various quests.  It helps to have a mage around for that sort of travel.  Portals speed things up quite a bit.

Now we have to start working on Blackrock Depths, which can be a considerable undertaking, at least in time.  And we’re hamstrung again in one way.  While as a group we are undoubtedly ready to march in and start slaying all and sundry, the quests for the instance are out of our reach by a few levels in some cases.

Well, levels come easily.  I just hope we don’t find ourselves suddenly beyond the level of Dire Maul, one of the few Azeroth instances we haven’t done as a group.  That is what happened last time around.