We’ve had free access to the Fippy Darkpaw progression server for a week.  But now the time of reckoning is at hand.  Or will be soon.

I logged on this morning, just to see if my account had been flagged as closed, but I was still able to get into the game.  I suspect that will change by this evening.

And so tonight I will have to decide whether to carry on with Fippy Darkpaw or not.

Though, as I have stated previously in posts in what has become my latest EQ nostalgia series, I think Potshot and I are interested enough to subscribe for a month.  I haven’t logged in to WoW since the Fippy went live.

The details of our further adventures in nostalgia are still to be worked out.  Like Stargrace has mentioned, there was some talk around multi-boxing.  I have never really been successful with that, but we shall see.

I just hope enough people will also opt-in for another month to keep the server lively.  That has been the key to the whole thing so far.

Anybody else in for another month?

Or, probably more interesting at the moment, if you have decided to give it up, why?

It was Sunday and I was pretty determined to get the spell Spirit of the Wolf before the free play period for EverQuest ran out.  As I mentioned previously, that was the goal which was driving me. 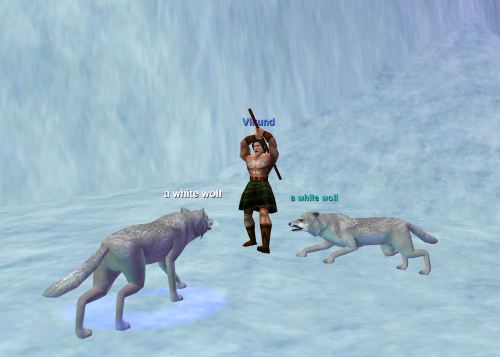 Spirit of the Wolf is perhaps one of the three great early spells in the game.  The other two being, in my opinion, breeze and mesmerize. (You can disagree, but Enchanters are still very popular.)

Spirit of the Wolf is a simple spell.  It lets you run faster.

That sounds silly until you remember that in EverQuest, and I am talking the original EverQuest or the approximation that exists on the current Progression Servers, there are no mounts and no flight points and no handy teleportation points.  If you are going somewhere, you are going on foot.

Oh, and every aggro mob in the game runs at least as fast as you do without the spell and will chase you until you exit the zone.  In that context, speed is life, as it lets you control being able to disengage from a losing situation successfully.

So Spirit of the Wolf, or SoW as it is almost universally referred to in-game, is a liberating and enabling spell.  Yes you can hunt mobs or run from Qeynos to Freeport without it, but things go much more smoothly when you have it.

Plus people love to have you in their group when you can cast SoW.

So Sunday was my chance to make a big leap towards getting that spell.  And Sunday shaped up well, with some chores getting done early on, but then everybody settling down to a lazy afternoon, my daughter with her games, my wife watching hockey on TV, and me in Norrath.

I caught up with Skronk as he was working on one of his monk armor quests.  He needed drops from putrid skeletons in Qeynos Hills, so we headed to ruins where the skeletons show up.  Fortunately it was night time, as the skeletons do not spawn in daylight, and the full day/night cycle in EQ is, if I recall correctly, 72 minutes.  So if you show up at dawn you could well wait more than half an hour for skeletons to show up.

The Ruins During Prime Skeleton Time

One of the reasons I think that the experience curve is about right for the progression server is that those ruins filled me with fear at night for quite some time in 1999.  The higher level skeletons, the Dread Corpses, that spawn there were a terror and killed me a number of times back in the day.

Now, of course, there is the distortion of time.  What I remember from 12 years ago as being “quite some time” could quite possibly have just been a day or two.  Or it might have been longer.  I did fool around making alts and I don’t think I was nearly as organized and focused back when EQ launched.  I spent a lot of time just going, “Oh wow, cool!”

But whether that fear was best measured in hours or weeks, those memories came back to haunt us since we stepped too close to one of those Dread Corpses and were in a fight for our lives.  Unfortunately, due to a misunderstanding with a level 20 necromancer, Skronk ended up dying.

During the fight, he asked us to please leave him the dread corpses.  I tried to convey to him that we were busy dying to the mob he was camping, it con’d red to us and it was beating the crap out of Skronk, but I don’t think I got my meaning across.  I should have just said something like, “Get it off of us!!!” or some such.

The necro eventually stepped in after I was out of mana and Skronk was down to single figure hit points and saved us.  Then Skronk stepped to close to another one that had spawned during the fight and died.  That lead to a bit of an exchange with the necro, but we eventually sorted out who was going after what and were happy enough from that point on.  We killed all the trash while waiting for Putrid Skeletons while he took care of the notorious Dread Corpses.

During that round, Vikund managed to get level 7.

A level in the morning

And then dawn started to break, he left, and one more Dread Corpse spawned right under us.  We ran for Surefall Glade, making it to safety ahead of the undead horror.

However, the way things worked out, we managed to zone in at just about the point when the Dread Corpse was standing at the entrance to Surefall Glade, where he one-shotted some newly minted ranger who was probably seeing the light of day for the very first time.  And then the Dread Corpse remained planted there, between the two guards, neither of whom showed any inclination towards disposing of this menace.

A careful reconstruction of the scene

You might begin to see why I feared these guys.  They were often sitting just outside of the door to Surefall Glade.  Who would design something like that in 2011, where a level 10+ aggro mob can just linger outside of a newbie start point while the guards do nothing?

So we were kind of stuck there inside the cave to Surefall Glade.

But luck was with us and a higher level druid came along and helped us get rid of the Dread Corpse.  Still, Skronk did die once to them and had to come face to face with his own mortality.

Skonk had to AFK for a while after that, so I went looking for something to do.

I headed out to West Karana and announced on the OOC channel, “level 7 shaman lfg.”  I only had to say it twice before I got invited by a group that was forming up.

West Karana all on One Map

The going experience theory, at least in West Karana that Sunday, seemed to be that you need a full group in order to maximize the experience gains for all involved.  Personally, I love this theory, since it meant that a level 7 shaman could get a group with some level 9 and 10 players looking to fill an empty slot.

And there were other groups forming out there.  It was like… people wanted to play together.

Naturally this is a self-selecting player base looking to relive the original EQ experience, and grouping is a deeply ingrained part of that experience, so I shouldn’t be surprised.

Our group formed up and started at the bandit farm in West Karana, right by where I took that screen shot of all of those corpses the other night.

Camping down on the plains

That was slow and we eventually headed up to the bandit camp up on the ridge where we planted ourselves for several hours.

Our home for several hours

When the bandits were down, we pulled anything that passed by.  Absent that, our tank would run out and pull something back for us.

The bandit fights were hectic.  We were often facing five bandits.  But we had an enchanter with mesmerize (see, love that spell) who helped keep things under control.  Plus his pet was doing more damage than anybody else in the group. 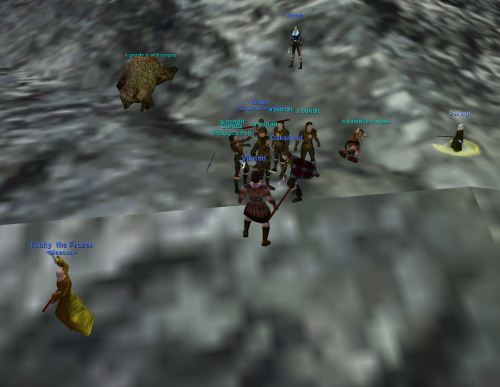 There was a lot of lag in West Karana.  Real, old fashioned, 1999 lag.  As somebody said on OOC, SOE was apparently trying to deliver the real EQ launch experience.

But it was good lag, server lag, not bad lag, or network lag.  When the server lags, everybody stops, including in the mobs that are beating on you.  When the network lags, you tend to unlag and find yourself dead.

The group kept on going.  Somebody would have to leave and then we grab another person to fill the empty spot and carry on.  Skronk actually joined us for a few minutes, but had to run suddenly.  I stuck it out for three hours, and would have kept going further, but dinner was on the table.

But for my time in the group I got more than two levels of experience.  That got me to level 9.

And a level 9 Shaman get the spell Spirit of the Wolf.  My first big goal was accomplished.

Or within my grasp at least.  I had to come back online later, run up to Halas, and get the spell from the right vendor at the shaman guild.

And in one of those moments of small irony, as I was almost to Halas, a shaman standing near the zone line between Everfrost and Halas hit me with SoW.  I ran all the way only to get a SoW about a minute before I could cast it on myself.

But I said thanks all the same.  He had just hit level 9 as well and was celebrating by casting it on people who were just passing by.

Having that spell is something worth celebrating.

But now I wonder if I should have rolled an enchanter.