A little over three years ago the Nexon game KartRider was in open beta here in the United States.  My daughter and I tried it out and found it reasonably light and enjoyable. 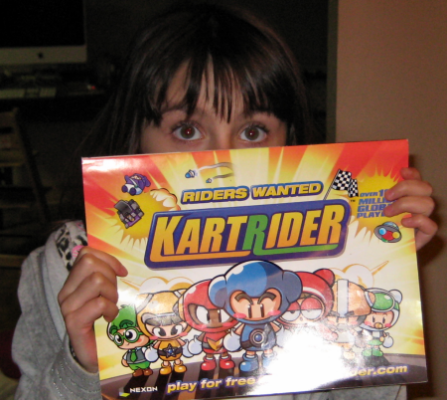 Big Ad on the back of GFW Magazine

It wasn’t quite Mario Kart, but it was a decent game and seemed to have quite a following in Asia with a reported 230 million people having tried the game world wide. (Or is that just 230 million accounts created?)

However, within a few months, the beta closed down and nothing more was heard about a US version of the game.

Open Beta has Ended, See You Some Day...

Apparently it was not a big hit in the US.  It disappeared from the Nexon America site.  That was nearly three years back.

Now, however, Kotaku reports that the game will be coming to the US market after all.  But not on your computer.

Instead it will be available on your iPhone, iPad, iTouch, or Android device.

You will be able to play against three other people in local match ups, and it will hook up to Facebook and the Nexon item shop, where you will be able to buy new tracks and all the car upgrades and customizations.

The odd thing is that online play will not be available.  At least it is not mentioned at all currently.  I can see how you might sell things in the MMO version of the game, but on the mobile device version, where you can only play against three other people locally, or against the CPU, the item shop seems… less compelling.

Still, it is supposed to be a free download from the App Store, with the Apple device version available soon followed by Android support this summer.