My daughter is a little annoyed with me at present.

On Tuesday the WoW Legion pre-launch in-game events kicked off, which included access to the new Demon Hunter class for people who pre-ordered the expansion. 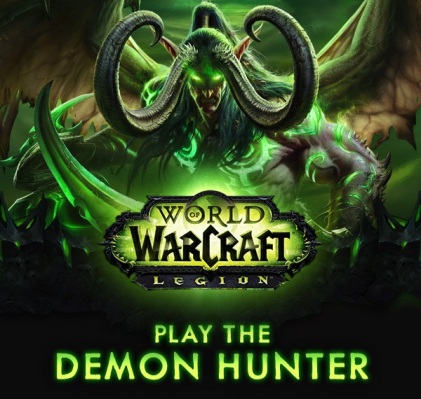 Play it… you know you want to…

I had to explain that while technically we had indeed pre-ordered, we had done so through Amazon so we could get the Amazon Prime 20% discount.  Saving $10 per copy means waiting until August 30th to play the Demon Hunter.  This did not make her happy, and she tried various ways to get me to just pay the extra $10, but I was not moved.  Instead I just pointed her to the invasion events going on in the game which don’t require you to be any special class.

The event is live!  I skipped the first night’s fun, figuring it might be a mess, but decided to give it a try last night.  The game is not subtle about getting you to this even either.  The “Hey, New Stuff!” screen that comes up when you log in lets you accept the quest right then and there, and the intro quest will teleport you to Stormwind (on the Alliance side, presumably Orgrimmar for the Horde) so you can get started.

There is a bit of a warm up and the quest chain hands you the first of several ilevel 700 items you will collect along the way, before you join the invasion fleet.  It starts off with us doing the invading.

The destination is, of course, that spot on the map that we’ve all somehow missed over the last dozen years, the Broken Isles.

How did we not see these before?

There you are set on what is essentially a scenario designed to lay the the foundation story for the expansion.  You visit exotically green places… fel is ever the design motif of the Legion. 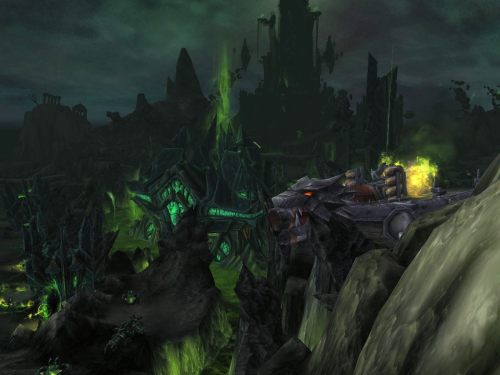 And, of course, you run into some of the usual cast of characters that even I, in my general lore obliviousness, have come to know.  You can’t have fel demons without Gul-dan somewhere in the background.

Gul’dan getting his fel mojo on

I don’t want to spoil the event for others with too many details (Liore will do that for you), but it crams together the usual Azerothian story elements of hubris, betrayal, famous names, tragic deaths, and a selfless sacrifice so that we could escape back to Stormwind on the last chopper out of Saigon.

Back in Stormwind, we find that there is a counter invasion to fight.  The demons were coming for us.

Once the fight in Stormwind was over, the quest chain turned to the world.  I was instructed to open up the map of the Eastern Kingdoms, find an invasion, fly to it, and join in the fight.

The only one on the map for me was up in the Hillsbrad Foothills, which doesn’t have a Alliance flight point anymore, so I took the bird to Arathi and fly myself to the event from there.

The even itself was centered on Tarren Mill.  After the event was over I realized I had the “Tarren Mill Terror” title up on Vikund, a reward for the Southshore event Blizz ran back in late 2014/early 2015, which seemed appropriate.

The event was a demon stomp to start with, and we all piled on together, Alliance and Horde shoulder to shoulder, to burn them down as they appeared.

In the chaos at Tarren Mill

Of course, there were a couple of Horde players flagged PvP, no doubt waiting for people to accidentally tab target them so they could kill them in the chaos. (And I am sure my fellow Alliance players included a few people doing the same.)  I managed not to get tripped up by that trap.

After a couple rounds of that, we were sent told to fan out across the zone to destroy Legion invasion points, after which we were recalled back to the mill for the final boss fight.  There there were congratulations via the new-to-me event dialog system that appears on the lower part of your screen. (I cannot recall seeing it before, but I may have forgotten it.)

Message from the event

And, of course, an achievement.

Then it was back to Stormwind to turn in the quest.  There was another ilevel 700 item in it, plus some loot boxes that ended up in my inventory as part of the event.  All in all, about an hour of play time to see the whole thing.  It was fun enough, in a chaotic sort of way, though I might have had more fun had I figured out how to play my ret pally before I jumped in.  I have the updated skills all laid out on my hotbars, but I feel like I am doing it wrong… which is generally a sign that I am, in fact, doing it wrong.  Have to read up on that.

Also interesting was sort of sizing up the event and how Blizz did things.  The whole thing drew on Blizzard’s past experiences and mechanics.  There was a bit of phasing, some borrowing from scenarios, some LFR mechanics, all their cross-server grouping stuff, and probably more bits I missed on the first pass, pressed together to funnel as many players as it needed to handle through a set of events without there being bottlenecks or long waits.

For example, there was no wait when I boarded the first ship in Stormwind and sailed off to the first round of fun, though there was a “look and see what is happening!” period as the ship approached the Broken Isles where I bet more people were joining my version of the tale.  And, at that point, it was Alliance and Horde together in a raid, running as two groups up different paths, but fighting the same boss at one point.

Also, when it came to the event at Tarren Mill, I appeared to have arrived at just the right moment as the event was starting off with its first stage.  I doubt I am that I just happened to wander in at exactly the right tick.  I am simply not that lucky.  I am going to guess that when I got in range of the event, I was put in with a cross server group that also was just starting up as well.

So Blizzard looks to have put this together to be as seamless as possible.  It is a theme park ride, and a casual one at that.  You can get in trouble if you wander off by yourself, but so long as you stick with the pack you are probably fine.  But it was designed to show you the story and get you involved/invested in the fight.  And the invasions will keep coming at an increased tempo if I understand correctly, right up until the expansion launches.

I will have to get out my other level 100s to run through it again to see how it holds up over repeat performances.  But we are clearly on our way to the new expansion at last.