As I mentioned at the end of the last post, I did indeed find a corehound puppy waiting for me once I downloaded the 3.3 patch (via FilePlanet yet again) and logged in.

This is Blizzard’s reward to those who use the Blizzard authenticator, or so they say over at WoW.com.

Though as noted elsewhere, logging in was a bit of an issue, at least on one of the servers on which I have characters.

Anyway, on logging in, I had mail.

The puppy itself is… um… a bit odd looking.  But then puppies are often awkward and have to grow into their looks. 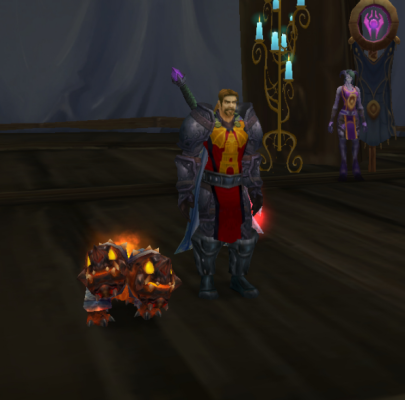 He certainly seems to be the most active pet I have so far.  He jumps around, rolls over, sits up and begs, and generally cannot sit still.

The puppy sitting up yet again

The post over at WoW.com has video of the corehound puppy’s antics.

Anyway, that is one more pet in furtherance of the 75 pet achievement.  Just 23 more to go.

Now I just have to wait for all my addons to get updated for the new patch.  QuestHelper gets flagged as “broken” even when I have WoW load out of date addons.  There is always something.