We were in Meridian again on Saturday night and primed for a dungeon.  Last week was about moving the guild, travel, and a quick level.  This week it was back to business.  The lineup was:

We stayed in town just long enough to admire the locals while somebody assigned their unused soul points.  Clearly, OCD is not a common group trait.

Once soul points were assigned and we had sufficiently discussed how that unicorn mount looks like a paper cut-out, it was time to go.

LFG take us away!

The destination was the Darkening Deeps, which was way over in Guardian territory.  So we decided to skip the overland travel attempt.  That was probably a good thing.

More after the cut, including spoilers about certain fights.  You’ve been warned.

We were underground again.  There were no quests waiting for us, aside from the standard “kill the bosses” quest you get with every dungeon in Rift.

There was an odd palette change early on.  Standing a bit in from the start point, looking into the dungeon, I had this view.

And then a couple of steps forward, the way forward changed.

Maybe not so light...

I guess that was the “Darkening” part of the dungeon.  Onward to the “Deeps” aspect!

We were faced with a decision not too far beyond that point.  The first large area of the dungeon appeared to be a spiral ramp which lead both up and down from our location.  Figuring that the word “Deeps” was a clue, we headed down the ramp.

This lead to a series of running battles with groups of mobs that also included what appeared to be a series of inbound, fire based artillery strikes.  An orange circle would appear on the ground… a pretty big circle… which was the warning that the area in question was about to be consumed with fire.

This meant, in addition to pulls and adds, we had to stay on our toes all the way down the ramp.  In the picture above we were pretty much at the bottom, having just gotten through the narrow bit, where the incoming circle bled off either side of the ramp.  That sometimes meant either running away from a fight or into some additional adds.

As exciting as that was, I think we only lost one of the mages early on before we started chanting “step out of the fire” on Skype every time the circles showed up.

At the bottom of the ramp and a little ways along we ran into the first boss. 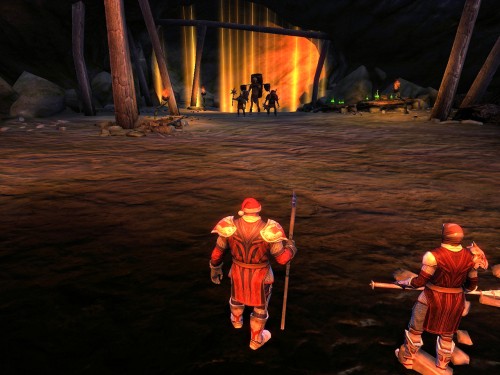 There was the boss, two minions, and some sort of ward on the boss making him invulnerable.  We had seen this setup before.  We marked targets, killed the minions, then killed the boss.  It was not a huge effort. 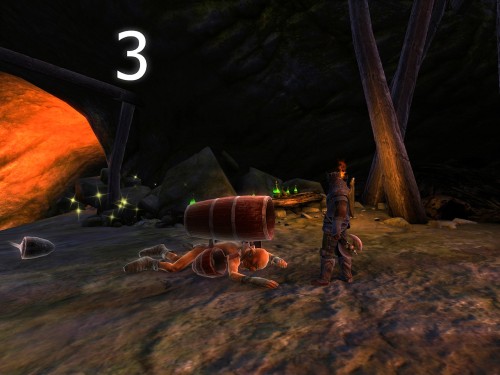 We were not sure what he was wearing on his back there.  From a distance it looked like it might have been a jet pack, but turned out to be a barrel with a couple of side buckets.  Whatever it was, it did not seem to enhance his fighting ability.

Slaying him opened up the force field behind him, letting us move on.  Rift seems pretty set on the idea of you killing all the bosses.  None of this sneaking past.

Immediately behind the former force field were a couple of mobs who summoned a few more invisible mobs that surprised us so much that we wiped.  We killed the boss, but the yard trash got us.

We soul walked back away from the scene, except for Gizalia who had died on the ramp, buffed up again, and took the whole thing a bit more carefully this time.  Staying close to Earl, the tank, seemed to be a good idea, so he could pull the adds off of us.

We moved on, slaying as we went, ending up in a big open area with light coming in from the ceiling and some people in cages around the perimeter, including one Michael Bringhurst, whose name appeared amongst the bosses on the quest tracker.

Making sure everybody was ready, I opened his cage.  He got out and walked around, reading his lines.

Out of his cage for 20 seconds and what does he do?

Yeah, the people in the other cages were warning us off, but he was on the list so we were expecting trouble.  And we got it.

One boss?  A werewolf?  How bad could it be? 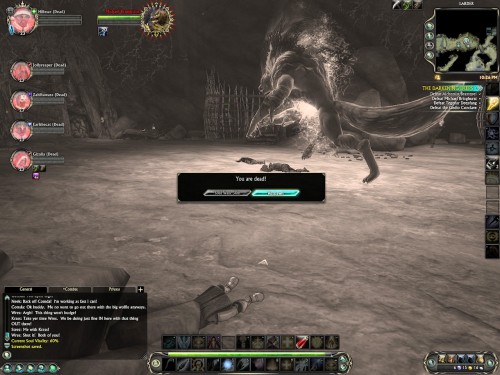 It could be this bad

We had a lot of trouble with this fight.  I think we did it five times before I went to look up what was going on.

We did a straight up fight.  Then another.  Then one where the casters stood way back, but it turned out to be too far back as a forcefield shuts off the fight from the earlier parts of the dungeon (no kiting I guess) leaving most of our damage outside of the fight.  Then we came back from that one but Michael was still buffed up from the previous fight and one-shotted us.

Werewolf awaiting our next assault

Anyway, it became time for Google to help us out.

If we had been paying more attention to werewolf lore, we might have figured it out.

It turns out that the light shining down isn’t sunlight (it was day outside I thought), or chemical light, or some form of magic light.  It is moonlight.  Full moon, moonlight I guess.  This is why Michael Bringhurst turned into a werewolf. (Though crap, in how many games do werewolves just wander around no matter what the lunar conditions?)

And, as it turned out, if he stands in the moonlight he gets a damage multiplier buff that keeps incrementing up so long as he is in that fine shine.  So the key it seems, as with Carol Ann, is to keep him from going into the light.

With that bit of knowledge, we got ourselves together, stormed in, and wiped again.

And then, finally, we did it right and brought him down.  There were enough deaths that we had to leave the instance for down to have the healer restore out soul vitality, which is the Rift equivalent of WoW equipment damage.

Zahihawass suggested a group shot over the body, just in case that was the last boss we could manage.

Michae Bringhurst with the hurt brought

At this point, part of the group turned around and started heading back to the ramp, failing to notice that a small door had opened up in the back of the moonlit chamber.  There was more to do in the depths of the Darkening Deeps.  So we rounded everybody up and headed into spider town.

There was a room with spiders and spider nests.  And you had to kill the spider nests because once you engaged the spiders, the nests started spawning more spiders.  That lead to a couple of frantic fights and another death until we hit our stride with the whole thing and knocked out the last of the nests.  At that point we moved forward, rounded the corner, and found the next boss.

And this was not going to be a stand up fight.  The big spider had some tricks of his own, which lead to more wipes. 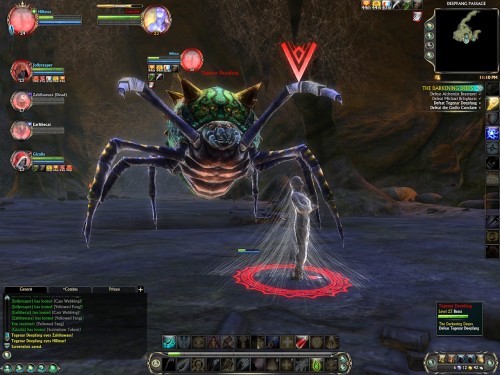 Wrapped up in battle

Among Tegenar Deepfang’s bag of tricks is the knack of focusing on, and then webbing up, one of the party members every so often during the fight.  At which point that person is helpless until the rest of the part frees them by attacking the webs.

In the first fight, Hillmar the healer was the first webbed up, which became awkward.  Fortunately Zahihawass had some healing to keep Earl alive.  But that killed our momentum in the fight and when the second Tegenar trick came along, some summoned spiderlings which went right after the mages, it was a wipe.

We tried a couple of different tactics with little success, aside from discovering that, as with the werewolf fight, the room gets blocked off when battle begins.  So we had one wipe with the mages locked out of the room.

As it was getting late, our Google threshold was lowered, and after a couple of wipes I went searching for answers.

Unfortunately, the answers were ones we had already figured out.  Get the DPS to free the person who has been webbed up ASAP and kill the spiderling adds as fast as possible.

We did not manage to come up with the right approach and kept wiping.

The wheels kept coming off, we were not getting any new insight as to how to deal with the fight, and it was getting late.  So we decided to call it a night.

Part of the problem is likely how we are balanced as a group and how we have our roles configured.  Both Earl and Zahihawass went off to look into revising their specs.  We also might want to put another level on the group before we go back again.

We shall see if we can come up with anything better before our next attempt.

Until then, the spider has won.

15 thoughts on “Struggle in the Darkening Deeps”