The members of our reconstituted WoW instance group in LOTRO each have a character dedicated to “staying with the group.”  That means no running too far ahead of the rest of the team during the week.

Of course, that means the more active members of our kinship have alts.  Oh, have we got alts.

One of the interesting things I discovered in running up my three characters, a dwarf guardian, a man champion, and an elf hunter, is that the prologue for the epic story line is different for each.  Yes, they start to merge before chapter one.  Elves and dwarves merge at “To Avert a War.”  I am sure that the human and hobbit quest lines merge at some point as well, though I do not know for sure, not having rolled up a hobbit yet. (Hobbit minstrel, once I find the time.)  Each of the quest lines give a different glimpse of the starting tale that comes together in chapter one.

Since one of the team was out sick, we used last weekend to get our alts up to, and a bit into, chapter one of the epic quest line.

I actually managed to solo through to book one, chapter one with my man champion… “man” seems so awkward, I always want to write “human”… without much difficulty.  At 15 he was over level enough to power through even the fellowship segment.

On Saturday it was time for my elf hunter, Tistann.  Here he is, just after completing his class quest. 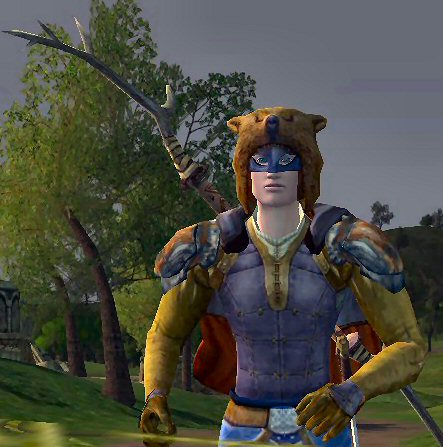 Nice hat, eh?  LOTRO does have some unique head wear.  He looks like a teddy bear themed super hero.  But that hat is the reward for the hunter class quest and it is significantly better than anything else he had on hand, so on his head it will stay. (And I promise to stop singing “The Teddy Bears’ Picnic.”)

First myself and a dwarf guardian, a pΘtshΘt alt named Fergorin, ran through the quest lines in Ered Luin.  He was already at “To Avert a War,” so he helped me get through some of my lead-in quests until we met up at that part.

Unilke the man quest line around Bree, I do not think “To Avert a War” can be done solo at level 15.  Tistann was 13 and Fergorin 15 and it was a tough fight for the two of us.  We used the “sneak and swim” method to get to the boat where the big battle takes place.  You sneak by the group of guards at the gate, jump in the water to the right, and swim past the next few sets of guards.  The guards actually see you at some point.  We actually were flagged as “in combat” with weapon drawn as we emerged from the water, but none of the groups of guards actually came to get us.

The big fight itself, while a challenge, went well.  Guardians seem to be able to grab and hold aggro very well.  Tistann mostly stood back and laid down the bow-based DPS.  He only had to go hand-to-hand with one of the dwarves.

Once done there, we wrapped up the remaining quests until we hit the step directing us to Bree and Barliman Butturbur.

After that, we headed out to Bree-land to help the third member of our alts group, Liadan the Loremaster, finish up her quest chain.  And soon we were there in the Prancing Pony ready to speak with Strider again.

Our group, going into book one, chapter one was:

The combo of rich quest experience and rested, double exp, got Tistann levelled up pretty quickly that night.

From this point we went through a few of the book one chapters, the same items I wrote about last week.  I even captured nearly the same screen shots.  Here we are facing the Nazgul and two Amdirs.  As with last Bilba showed no dread, this week Liadan seems to be immune.  Is this a female trait in LOTRO, not feeling dread before the servants of Sauron?  Or is she just smarted than us because she stands back further?

And the fight with Amdir himself.  Fergorin is up on the altar with him while Liadan and I get in our ranged attacks. (Liadan is in the silly had brigade as well.) 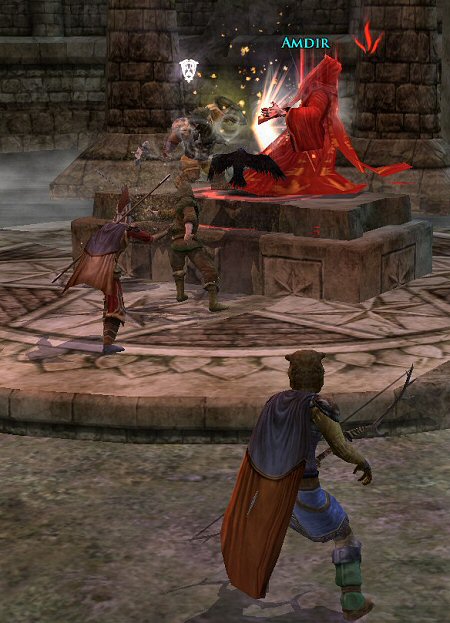 Of course, you might ask why I would want to do the epic quest line with more than one character.  Well, quests, big and small, are what LOTRO is about.  It is the way to gain experience in the game and it is also the way to get superior equipment.  Crafted equipment is good, and there will always be a few slots you will want to equip with player created items, but much of the quest equipment is much better. (For example, if you are a hunter, you will want to do the quest “Thornley’s Farm north-west of Bree.  You end up with a great bow for the effort.)

So I will probably end up driving my alts through the various chapter quests that make up the books.  The rewards, both in experience and equipment, make them worth the effort.