For ratting in null sec, Gaff told me that the Tengu is unparalleled.  And so my Tengu strategic cruiser, which had been sitting in my hanger since early 2010, got shipped out to 0.0 space.  It was time to blow off the dust and actually use it.

Ratting, the hunting of NPC pirates (rats, which distinguishes them from actual player pirates) in space, has changed some since I last pursued it.  In fact, the last time ratting was an activity I pursued in and of itself was probably back when I started playing EVE (back in 2006) as a way to make a bit of money with my second post-Ibis frigate.

My first post-Ibis frigate was destroyed when the very first mission I drew was the tier 1 version of Worlds Collide, which turned out to be a quick death for my ship.

Back then it was simply a matter of jumping around between asteroid belts looking for rats, then killing and looting them.  And that is still a viable plan, especially in null sec, where a belt rat spawn will occasionally include a special ship that will drop faction items.

The downside of belt rats is that the spawn rate can be slow, there are only so many asteroid belts in any given star system, a lot of the spawns can be tiny crap, and even one ship can usually blow through all the belts before anything respawns, so if there are two or more people looking to rat to get that special drop, it can be a slow way to accomplish anything.

So at some point… I forget the expansion… CCP put in anomalies.  I most likely do not remember when because I ignored them.  I was running missions, mining, building stuff, and doing tech II research.  I didn’t need anomalies.

Now, however, they are of interest.

Anomalies are essentially concentrations of pirate NPCs in a star system that you can find with your ship’s scanner.  The size and quality of such concentrations depends on the quality and level to which a system, in null sec at least, has been upgraded. (I do not understand the whole “upgrade” thing, but that is for another day.)

These concentrations are in regular space, unlike some missions which occur in deadspace, which is instanced, and are effectively mini-missions.  You scan, you select one from the list your scanner shows (and they come in multiple flavors… though foresaken hubs are the best bang for the buck I am told, if you have the right ship), warp to the one you picked, and then say hello to your new friends. 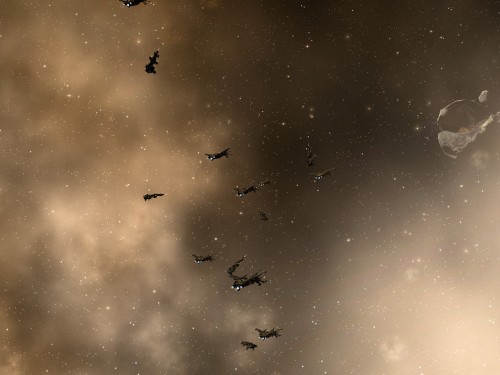 Guristas waiting for a train...

Of course, they have been sitting around waiting for something to do, so are probably happy to see you.

You get several waves of ships, waves appear to be triggered by killing off all of one of the ship types in a given wave (so you can get yourself in trouble), and at the foresaken hub level of anomaly, the ships appear to be mostly battlecruisers and battleships.

The main reward comes from bounties on the rats, which can run beyond 1 million ISK for a battleship.  Plus you get a decent boost to your security standing with CONCORD.  Actually, I have been getting a huge boost, mostly because I think CCP finally fixed that one skill, Fast Talk, that I trained years ago that was supposed to boost your standings more quickly.

Once you kill off one of these anomalies, a replacement spawns a few minutes later, so you can keep on going if you want… and nobody else is hogging the spawns.

But to do this and make the million ISK bounties, you need a ship that can handle it.

Shield-wise, I am pretty sure I could manage it in a Drake.  I think I have all Drake related skills for level V.  But Gaff said to really do it right, I would need a Tengu.

And then he linked me a Tengu fit that violated the first rule of undocking: Do not fly what you cannot afford to lose.

His all-faction and tech II fit would have eaten up most of my billion ISK slush fund, and I already owned the ship and three of the five modules.  Buying it all again from scratch wasn’t going to happen.

So he said I could probably make do with a mostly tech II fit, especially since my shield tanking skills were all max’d out.  He did give me what he considered the two key items, the Dread Guristas Ballistic Deflection Field and Gistii B-Type Small Shield Booster.  He had just sold a pile of stuff in Jita an was feeling “space rich,” or so he said.

So I ended up with this fit, which you can copy and paste right into Pyfa, the tool which seems to have replaced EVE Fitting Tool while I was away from the game, and which I can afford to replace should I lose it.

That setup has seen me through a number of foresaken hubs so far.  It is cap stable for me, and I have never been down to even half shields yet, even when I have messed up and spawned an extra wave or two early.

The only cheap item on the ship is the target painter, which helps me deal with the occasional frigate spawn.  Plus it puts out a cool red beam on your target. 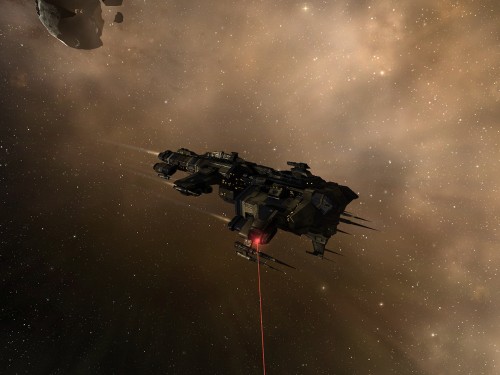 Target painter on a Ferox

I think all the level V skills help, though I still have room to improve.  My Caldari strategic cruiser skills are only level III or IV, so I could eke out better performance… once I am done training up Minmatar and gunnery skills that I need for fleet operations.

Tengu skills... right after that other stuff

Now I just need to fit out the Noctis that just got shipped out (another hanger queen of mine that has just been sitting around since I bought it) so I can loot and salvage and generally indulge my inner hoarder.

Then maybe some day too, I will feel “space rich” again.

6 thoughts on “The Return of Whiskey Tengu Foxtrot”