It is hard to do, mainly because I wasn’t there when it happened.

In fact, I had totally forgotten about it until SynCaine linked the Battle Clinic kill mail readout for his first PvP kill in EVE. (And boy are there a lot of EVE kill boards out there. I need to look into how that works at some point.)

Looking at his kill and his history, I decided to see what turned up when my character name was typed in.

The kill side of the list showed all the things I hit during the POS shoot.  That is all structures, no ships.

And then there were the losses, which included five ships and two pods.

Those four ships I remember.  All four losses were documented here on the blog, as the links will attest.  I try to share my failures, as they tend to be more instructive, or at least more entertaining, than success.

But there was a fifth ship and another pod there at the end of the list.

The ship was a Bantam.

The Bantam was the frigate you used to get as a reward for running the tutorial missions back when I first started playing.  The date of the kill mail entry was September 5, 2006, which would put the event just 6 days after I started playing EVE.  In fact, that predates my first post (which you know I updated when I grabbed that link) on this blog by 6 days and my first EVE Online post by 9 days.

So this is the pre-history of the blog.

But it was the location of the event that really shocked me, the kill took place….

Holy crap!  I’ve been lying all this time when I have said I have never been in null sec!

Because there is the kill mail, which places my death in the system M-OEE8.

How could this be?

I had to think on this a bit, piecing together what I saw with what I could dredge from my memory.  I think this is how it went down.

I was new in EVE Online and looking for a way to make money.  For reasons I can no longer recall, I hit upon courier contracts as a good way to do that.  This was back when contracts were… different.  The contract system that is currently in the game did not exist yet.  It was just a couple months away, with the Revelations expansion, along with rigs and tech II research (which had been doled out by lottery up until then), salvaging, and a bunch of other stuff that seem like they have “always” been there at this point.

Anyway, there was a system to get a contract like that.  I can’t find a screen shot of it, and my memories of it are hazy to the point of being almost all haze and no memory, but there is a little corner of memory I can grab onto that seems to want to call it more like a user created missions board in-game.

Somebody will have to come along in the comments and clear that up.  But it was there, and I put down a deposit and got a courier mission.  I was picked it up in Jita and one of the things I remember was that it called for a lot of jumps to get to the destination.  More jumps than I had ever taken.  Something in my brain, calling through the haze again, wants to say 29 or 33 jumps.  But it might have been 19 jumps.  Or 22.

Whatever it was, it was a daunting number to me.

But the reward for this delivery must have been good, because I ran with it.

Which brings us to another key aspect of EVE Online at that particular time.  There was no “jump to zero meters” option.

Every jump, auto pilot or manual, to something, a gate, a station, or whatever, put you 15km out and you had to slow boat the rest of the way to your destination.

It was like the freaking dark ages, before the invention of multi-ply toilet paper.  This is why I trained up all of my ship speed related skills to level V before I could pilot a cruiser.

Because of this feature of the game, there was a big market for jump locations (what were those really called?), coordinates that marked a spot 15km beyond fixed locations, like jump gates, so that you could jump to that point and end up right on top of the jump gate.

The catch was that a given set of jump locations was good for a destination only from another specific point in the system, if I recall right.  So you needed one to jump from the station at Jita 4-4 to the Sobeseki gate, but if you were at another station in Jita, it wouldn’t work.

And there was a huge market for these locations.  People were selling them left and right.  I remember local in Jita being full of offers for these.  I think there was even an RMT black market in this sort of thing, all of which serves to illustrate just how painful this whole situation was.

Now, I probably appear to have veered once again from the point of my story into some hoary old anecdote  about how EVE used to be “back in the day.”  And I am.  But I assure you, it is also relevant, because it explains my behavior with what happens next.

I had the location for the delivery.  I opened up the map, I found the system, and I made it my destination.  I then undocked my ship, turned on the auto-pilot, and walked away from my computer to watch a movie with my wife in the other room.

Yes, that is right, I set my destination for null sec, which also involved getting through low sec, and let the auto-pilot do the driving.

I cannot speak to my state of mind.  I do not know if, at that time, I even knew what the security status really meant.  Travel was so slow back then that I might have just figured I wouldn’t get into a dangerous star system before the movie was over.

In any case, the ship wasn’t going to get there much sooner with me staring at the screen, even if I lit that tiny civilian afterburner at each gate.

I suppose the real surprise is that I actually made it to null sec before I died.  I had to pass through a couple of low sec systems, and such systems on the way to null sec tend to be where the gate camps are.

I wish I had been there to see myself get zapped.  Instead I was in my clone back in a station, probably in Jita.

And then there was the mission itself.

What was it I was trying to deliver against the odds to a station out in the wilds of null sec? 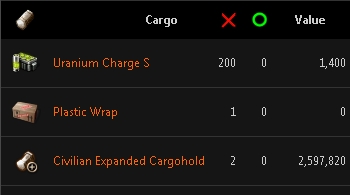 The stuff in my cargo hold

There were only three items in my cargo hold according to the entry, and I am pretty sure nobody was shipping Civilian Expanded Cargoholds or small Uranium Charges.

Which leaves only the plastic wrap.  I guess there were some uncovered leftovers in null sec.

All of which means that I made it to null sec a lot earlier than I thought.

My only disappointment is that this event predates the point when CCP started collecting data on what systems you visit and how often.  So my in-game map says I have never been to M-OEE8.

But I know I have been there.

11 thoughts on “Remembering My First PvP Death in EVE…”