It is raining again… which is a good thing in California… and a spate of different things have rolled across my screen, all of which interest me but which don’t quite warrant a full blog post yet, so we’re back to Friday bullet points.

After a long stretch of silence, there was finally some news about the game.

On the upside of things, the remaster will be available come February 20, 2018, so it will be here soon.

On the down side, the game will ONLY be available through the Microsoft Windows Store.  Leaving aside the whole “I don’t need another goddam Steam clone” and my lack of trust in Microsoft, the store itself tells me it won’t be available until the end of 2018 and that it won’t run on my device. 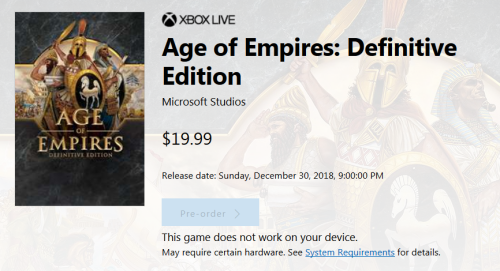 Also, it may require certain hardware

So I guess that pretty much lets the air out of any Age of Empires nostalgia I had as well as being a bad sign for any possible hope I had in their whole Age of Empires IV plan.

From there we head over to Trion Worlds where their 2018 Rift On! producer’s letter.

Trion looks to be eyeing the green fields of nostalgia as well, taking a card from Daybreak’s deck and promising something called Rift Prime, a subscription only version of the game that will come with a fresh server, reduced cash shop options, progressively unlocked content, and NO lockboxes.

I have said in the past that the one thing that would surely get me to roll on back to Telara was a retro server of some sort, so this sounds like it might be the time.  The instance group in pre-Storm Legion expansion Rift was one of my MMO high points.  Still, there are some mixed messages.

We plan to present RIFT at its roots as much as is possible to do, and look forward to sharing details over the coming weeks. The PRIME server will progress at a faster pace than the original launch and will eventually come to an end in spectacular fashion.

So back to the roots is good, and I expect that the servers will have to progress… by which I assume they mean unlock expansions… more rapidly that than the first time around.  I am curious as to what the spectacular end will be.

But then there is also this to wrestle with.

As a small teaser of what’s to come, dynamically matching characters to their current zone’s level, dungeons dropping loot specific to your character’s true level, caps on the number of professions available to a single character, and participation awards that carry over to your characters on existing servers.

Many upcoming live content changes that apply to existing servers will also apply to the new PRIME server, assuming they’re not restricted by progression locks.

That doesn’t sound very much like Rift at its roots.

Anyway, the current time frame is “spring” for Rift Prime which, as we recall from the Landmark launch, extends out to the first day of summer in the back half of June.  Syp goes on about the Rift Prime server idea at length, but I am waiting for more details before I crank up the thousand word minimum post-o-matic opinion machine.

It is an even numbered year so Nintendo is having Pokemon events to give away legendary Pokemon. 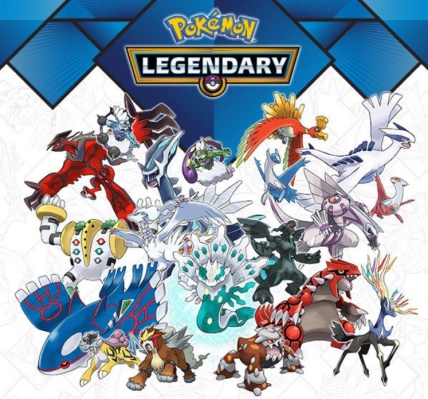 Didn’t we just get some of these?

Getting people to come to events to make Pokemon a more social game has always been part of the Game Freak/Nintendo plan, but didn’t we just spend 2016 having monthly legendary events?  And isn’t the ability to catch a bunch of these part of the sales pitch for Pokemon UltraSun & UltraMoon?

Oh well, if you missed out and don’t have the wherewithal for end game Pokemon, another series of events are coming for 2018 starting with a Dialga and Palkia event in February at your local GameStop.  In order to participate you must have a copy of Pokemon Sun, Moon, UltraSun, or UltraMoon.

Also coming up in February for Pokemon nostalgia buffs is Pokemon Crystal on the 3DS Virtual Console.

More on the Expense of Video Games

In something of a follow up on the raging discussion back at the end of November about how expensive it is to make video games, Raph Koster has returned with a new presentation and discussion about the cost of making video games.  So more charts and graphs and a list of suggestions await.  If nothing else you can bask in how little we pay per kilobyte of video game software these days I suppose, a measure which makes those old 143KB Apple II floppies seem like something of a gold mine.

Where Have All Our Video Cards Gone?

And finally, we can wistfully recall the glory days when we were able to go down to Best Buy and purchase a goddam video card.  Ars Technica has an article up about how all this Tulip bubble crypto currency boom is soaking up all the high end video cards.  I guess I will be stuck with a GeForce GTX 960 until this whole thing collapses.

Anyway, those were my bullet points for the week.  If you want more there are some over at Endgame Viable, most of which are not duplicates of items on my list.