This could be the first of a multiple post thread on the topic… or it might all end right here.  I am not sure yet.

Last week I wrote about immersion from my usual point of view, which was trying to pin down what it is while trying not to become the pedant that cannot see that it can be different things to different people, that getting there and getting pulled out of that state are very much things that vary from person to person.

In reflecting for a while on things I found immersive, games and moments in time from those games, I came to the not all that startling in hindsight conclusion that there is very much a pattern of immersion when it comes to games I have enjoyed, played for long stretches, or for which I feel a great deal of nostalgia.

More of a “that makes sense” discovery than a “eureka!” moment, and yet I feel that there is, perhaps, a “eureka!” to be found if only I could approach this from the right angle.  It feels like if only I could somehow parse through the games that I liked because I achieved some tipping point level of immersion in them that I might find a pattern, some common thread… or maybe several parallel threads… that links those games together.  If immersion is truly a key aspect that dictates how much I like a particular video game, then discovering what factors lead to immersion might not only explain my video game preferences, but help me find games more likely to get to that immersion point.  To figure that out I need more data.

But how do you even go about compiling data for what is, at its heart, a very subjective and often transitory experience?

My initial thought is to simply list out all of the games that I have really enjoyed, that series of special titles that rise up above the rest, and explore, one by one, what worked for me within each.  Call that “The Immersion Files” and we are probably talking about a minimum of 50 posts exploring various titles through the years.

That can’t be enough though.  I have to at least spend some time with titles that, for whatever reason, did not hit the nebulous and indefinable immersion threshold, but perhaps should of due to their similarity with titles that did.

Why, for example, did EverQuest II and Lord of the Rings Online cross into immersion territory, but Star Wars: The Old Republic and Guild Wars 2 never did?  That comes close to trying to say why World of Warcraft succeeded and Warhammer Online failed when somebody like Richard Bartle says that they are, with enough distance, pretty much the same game; an exploration guaranteed to make somebody angry!

Not that such would stop me.  I’ve already had people shout “willing suspension of disbelief” at me like it was an answer on that front, I can handle that.  Plus, I would be exploring my own likes, which need not feel obligatory to anybody else.

Also, any such exploration depends on my own recollection, and memory is notoriously faulty in most people.  If I go through all the possible titles I am going to have to dig way back.  Literally the first really immersive video game title that comes to my mind was from the mid 1970s, somewhere between Pong and the Atari 2600, when a friends dad brought us into the office while he was watching us one weekend and let us play Star Trek on the mini computer in accounting. 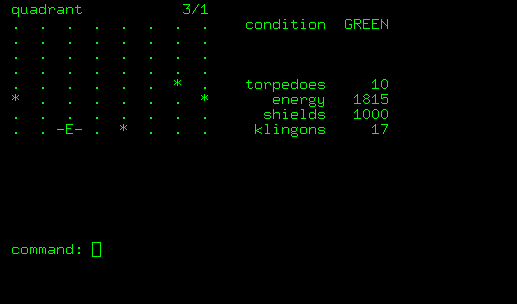 The source code for a variation of that in BASIC is all of 425 lines long.  We were so into that game we had to be dragged away and we went on to create a board game version of it so we could play it independent of the accounting department.

But this very early title brings up some important… to me at least… questions about the relative nature of immersion.

First, how much has what triggers immersion changed for me in almost 50 years?  I found this very deep at the time, but I was also 10 years old.  I suspect I wouldn’t find the same level of immersion in it today.

Second, how much does the state of technology at the moment affect immersion?  A 425 line BASIC program was pretty spiffy back then, but today it hardly makes the cut.  I was playing much better Star Trek games in the 80s and 90s, and even those games seem somewhat primitive by today’s standards.  I don’t need AAA photo realistic titles to find immersion… I can find it in un-modded Minecraft for Pete’s sake… but it seems likely that my experience since that game would make it less likely to hold my attention.

And third, how much does the associated theme and/or IP affect immersion?  While I practically need rose-tinted binoculars to see that far back in time, I do know that part of the appeal was that my friend and I were very big fans of Star Trek and this gave us an opportunity, simplistic though it was even at the time, to sit in the captain’s chair and fight Klingons.

This is not a throw away idea, either.  I suspect, could I fully explore my subconscious, that I would find that part of the reason I found, and continue to find, LOTRO compelling and immersive is its association with the books I read not too many years after my friend and I were playing our board game version of Star Trek.

Does my love of EverQuest at launch stem from it being a great game at the time or from the fact that it was very much a translation of TorilMUD, so I came in with some familiarity of what was going on?  I would argue that it was more of the former, but the latter was not absent.

How much impact does familiarity have?

Then there is playing with others.  That is always a big draw for me.  I am pretty sure I put up with WoW at first, which I didn’t like all that much at launch, because friends jumped over to play.  What impact does that have?  Does it improve the chances of immersion?

And given all that, how do I explain Star Trek Online?  I was into and familiar with the IP, wanted to play, and was there on day one with friends… and yet it never grabbed me.  Was it lack of immersion?  Was it just not a game made of of elements that appealed to me?  Or were expectations that the stars would align on such a combination of factors so high that disappointment was inevitable?  Does hype, anticipation, and high expectation impact the possibility of immersion?

Then, let me pile on top of all of that the “me” factor of how I felt, thought, and reacted to the world at various times over the last half of a century.  Leaving aside the tech aspect, there was a time when I would play NetHack all night long… I had the source code and would throw in my own tidbits at times just to see if would run into them… and then there was a time when I would no longer find that interesting.

Did I change?  Did something better come along?  Did I just wear out the possibilities of the game?  I suspect it was all of those combined and probably a couple other items as well, but there was a point when immersion was possible, and then that passed.

So is it even worthwhile exploring why Tank was immersive and Pong was not?  Why the Atari 2600 games Air Sea Battle and Pac Man were dull but Adventure and River Raid would keep me up past my bed time?  Why I played so much Wizardry and Ultima III?  Why WoW Classic is immersive now, and much more so than retail WoW, while early WoW wasn’t terribly immersive for me back in the day until around Wrath of the Lich King? How far back does the exploration of immersion remain valid?  What applies to me today?  Does TorilMUD?  EverQuest?  WoW?  LOTRO?  Valheim?  Where do the answers to this lie?

Perhaps the study of a single title that has both immersive and non-immersive aspects for me?  We shall see if I get to that.